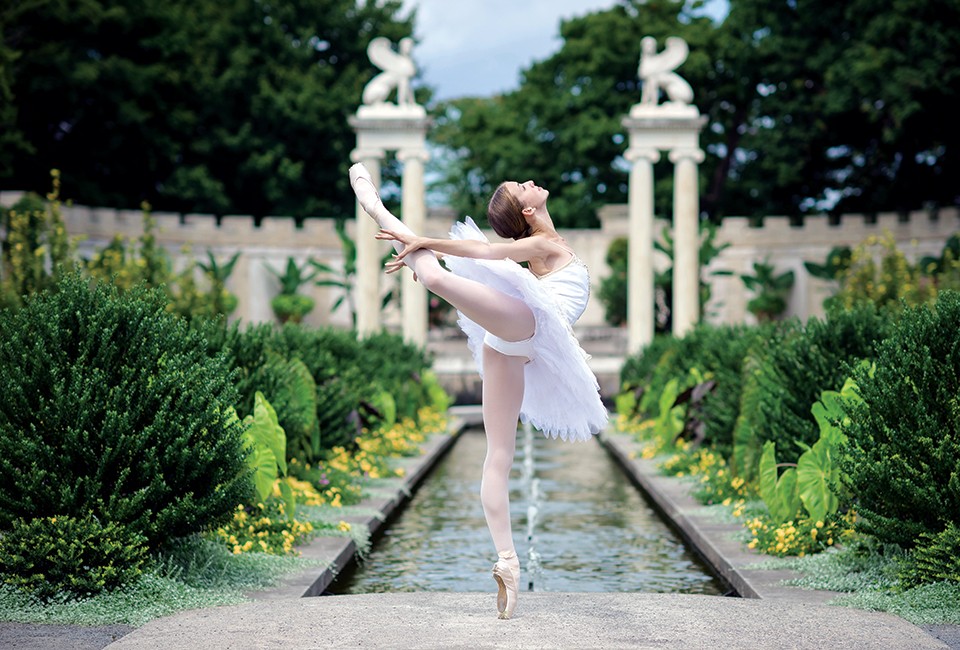 Rubin pointe shoes, like the ones worn here by Melissa Chapski of the Dutch National Ballet junior company, are popular and known for their versatility. (Photos/Courtesy Russian Pointe)

In between staff meetings and designing boxes for her ballet shoes and forging cross-cultural bridges in education, arts and business, Aleksandra Efimova maps out her future. Where is she going? How will she get there? She calls it her “wish list.”

Efimova drafted a similar plan after enrolling in classes at Eastern Michigan University in 1995. Her vision? To import dance shoes and apparel from Russia to the United States.

Over 20 years later, on a recent afternoon, a glowing Efimova saunters into her downtown Chicago office looking elegant and poised. She warmly greets her staff—personal assistant, sales team, marketers—before taking a seat in the conference room. Ballet shoes are neatly displayed, along with posh totes and other branded merchandise including T-shirts and iPhone cases. Large canvases showcasing young ballet dancers alongside Efimova decorate walls painted in the signature purple of her brand, Russian Pointe.

The vision Efimova drew up at Eastern is fully realized throughout Russian Pointe’s home base, where she’s featured in framed clippings lining the entranceway. Some are from Russia, where Efimova was born. One 1999 article from “Crain’s Detroit Business” recognizes her as an “American Dreamer,” a nod to her success as an immigrant. She remembers “counting the hours until that article came out because I was so excited.”

“We didn’t have businesses,” explains Efimova about growing up in St. Petersburg, Russia. “For me, there was a learning curve in America, and it was not only learning the language—it was learning about all the opportunities the country presents. What is it to own a business?”

It took her two years to absorb the English language. “You just take a big dictionary and you sit down and start translating every single word in your homework,” she asserts, with a nonchalant shrug. “Circle the word and write the translation.”

Though “it’s truly very, very different to read about marketing and actually go home and try to make a sale,” Efimova began selling ballet shoes out of her apartment near EMU’s campus, and used those sales to put herself through school. Even then, says Efimova, “I knew I wanted to have an interesting, impactful, meaningful and fulfilling life.”

Efimova developed her problem-solving skills while studying international business and marketing as an undergrad at EMU. Later, she graduated from Harvard Business School’s elite Owner/Management Program for executives.

In her younger days in Russia, Efimova couldn’t have imagined being a business owner. But in June 1993, her family arrived in the United States. Efimova’s mother, Elena Townsend-Efimova, came to Ann Arbor to launch a private art school called Talking Colors; Efimova’s father is an engineer by training and a business owner. Efimova aspired to pursue art like her mother, but reality set in after a tour of the art studios at the University of Michigan.

“Her face was changing,” Elena recalls. “In the end she said, ‘Mama, do I want to sit in dirty jeans on the floor? No! Do I want to have graphite on my hands and my legs? No! I want my manicure, high heels—I’m going to business school!’”

Efimova fondly recalls Lorraine Uhlaner, a former EMU business professor and her “coach and eye-opener on the world of entrepreneurship,” who took the aspiring mogul under her wings.

“Aleksandra was one of my most memorable students,” Uhlaner says. “She was obviously quite talented, but also already very much the entrepreneur.”

Efimova “perfectly understood the ballet world and the importance of high-quality shoes,” says Uhlaner. “One tries to excite students about an entrepreneurship career, but very few students really succeed.”

The life Efimova envisioned while attending Eastern is now splashed across her Instagram account, where she can be seen speaking to over 350 guests as the keynote speaker at the EMU Business of the Year Luncheon last March 18. Just days later, she was petting a deer on the island of Mijayima in Japan. Another photo features Efimova at a shooting range, clutching a gun; the photo caption could be Efimova’s life motto: “Getting to know the unknown.”

What’s next? A brand expansion into new areas that are deliberately not dance-related. Efimova is also writing a book that she hopes will inspire future entrepreneurs, especially those who want to make something from nothing. “I want it to be inspirational for entrepreneurs—for women and immigrants,” she says. “I’m telling the story of Russian Pointe as an example, for individuals to visualize their success.”

Beyond business and book-writing, Efimova is immersed in public service and philanthropic endeavors. She dedicates time to Russian-American relations and culture. She has served on boards and committees for arts organizations. She has collaborated with the Russian Embassy. In 2011, Illinois Sen. Mark Kirk appointed her chair of his Russian and Eastern European Advisory Board, one of several advisory groups he formed to better understand the needs of various constituent groups. In 2014, she was appointed Midwest vice president of the U.S.-Russia Chamber of Commerce.

When she can break away from her business, travels and speaking engagements, Efimova relishes being at home, on the 73rd floor of Chicago’s Trump Tower. She switches off her phone. No Facebook or Instagram. No noise. It’s then, she says, “I dream about everything and anything.”