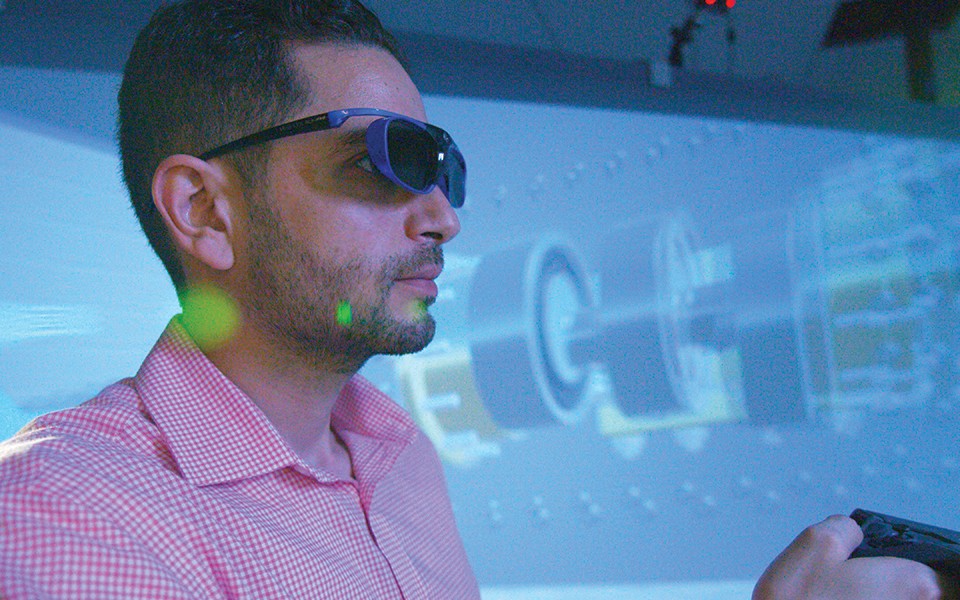 Imagine designing the interior of a van, then entering the vehicle to check out the space. You open and close compartments, turn on an overhead light, and get a feel for your ability to move comfortably inside.

Now, imagine doing this without having to build a physical van prototype.

The School of Engineering Technology completed the lab during the Winter 2018 semester as a tool for students in electrical engineering, mechanical engineering technology, and product design and development. In addition to computers and video controllers, the lab includes a 160-square-foot viewing area with rigid acrylic screens making up three walls and a floor.

Advanced VR enabling software and a photorealistic rendering engine make it possible to transform a two-dimensional computer-aided design (of, say, a passenger van) into a highly realistic, three-dimensional virtual image. Special liquid crystal shutter glasses allow the viewer to step inside the screened space, enter the virtual van and move about inside. Special high-tech gloves add to the lifelike experience, providing the sensation of touch and allowing the viewer to open and close compartments or handle light switches. A hand-held 3-D interactive device allows the viewer to rotate and manipulate the images.

Tanbour built the lab with community service in mind. Its initial project involves redesigning the patient compartment of ambulances used by Huron Valley Ambulance, a division of Emergent Health Partners. Huron Valley has a fleet of about 135 ambulances serving seven counties surrounding Ypsilanti and Ann Arbor.

“There’s been an increase in the frequency of ambulance crashes over the past decade, placing patients and emergency care providers at greater risk of injury,” Tanbour says. “There’s a need to rethink the design of the ambulance patient compartment to increase ergonomics and safety. We selected Huron Valley because of its large service population.”

Last fall, EMU senior mechanical engineering technology students used a computer-aided design program to reconfigure the patient compartment of a Huron Valley ambulance. Then they transformed it into a VR image.

“VR can help determine the comfort level for paramedics in the ambulance compartment,” Tanbour says. “It also allows the ambulance company to evaluate different interior designs and configurations without having to spend money on a physical prototype. That can help companies introduce new products more quickly while saving on costs.”

Representatives from Emergent Health Partners visited the lab in May to see a virtual ambulance demonstration. To enhance the viewing experience, students placed the ambulance within a virtual accident scene, including a highway, freeway overpass, passing vehicles and an overturned car.

“It was as if we were standing on a highway with an ambulance near an accident site,” says Shaun Pochik, education manager for Emergent Health Partners. “We entered the ambulance patient compartment and had a 180-degree view of the interior. We could reach up into virtual space and simulate the opening of cabinets. It was very realistic and really neat—not at all like a video game.

“Dr. Tanbour and his students are very innovative. I don’t know of anyone else who has produced a 3-D model of an ambulance. You typically see design schematics on paper.”

The VR project is timely. Several national companies design and build ambulance interiors. Within the next five to 10 years, Pochik expects to see those companies introduce major redesigns.

“Ambulances will be going to smaller, sleeker models that offer just as much room in the patient compartment,” he says. “Ergonomic concerns, fuel efficiency and government safety regulations drive the redesign process. There’s certainly room for improvement in ambulance interior design. As paramedics will tell you, they don’t want to reach over patients to pick up heavy items.”

“We already practice high-definition training with new paramedics and emergency medical technicians,” he says. “But VR can immerse trainees in an accident situation, either inside or outside the ambulance, more than our current technology allows. I truly believe there is a future in VR design and training.”

Huron Valley will bring a real ambulance to campus this fall so EMU students can compare the vehicle to their VR version.

Eastern completed the $174,000 lab with the help of a $50,000 grant from the Ford Motor Company Fund. Drawing on his extensive experience with VR applications, Tanbour built the lab and designed its software at a fraction of the retail cost.

“Major suppliers offer a turnkey version of a lab like ours for $1.5 million,” Tanbour says. “I know the ins and outs of where to shop. We use rigid acrylic screens that do not sag like soft screens and offer higher fidelity. A major supplier quoted a price five times higher than what we paid. We also purchased open source software, then scripted it ourselves to develop the applications. The resulting software belongs to Eastern, which means we don’t have to pay an annual license fee to an outside company.”

The lab’s capabilities appear limitless. Besides engine and vehicle component design, other uses could include prosthetics or personalized medical applications.

“There are no limits on the size of VR prototyping,” Tanbour says. “The Huron Valley project is a demonstration of our capabilities. And, of course, VR is of great benefit to Eastern students. The School of Engineering is moving forward in teaching and research techniques to prepare students for an increasingly challenging workplace.”