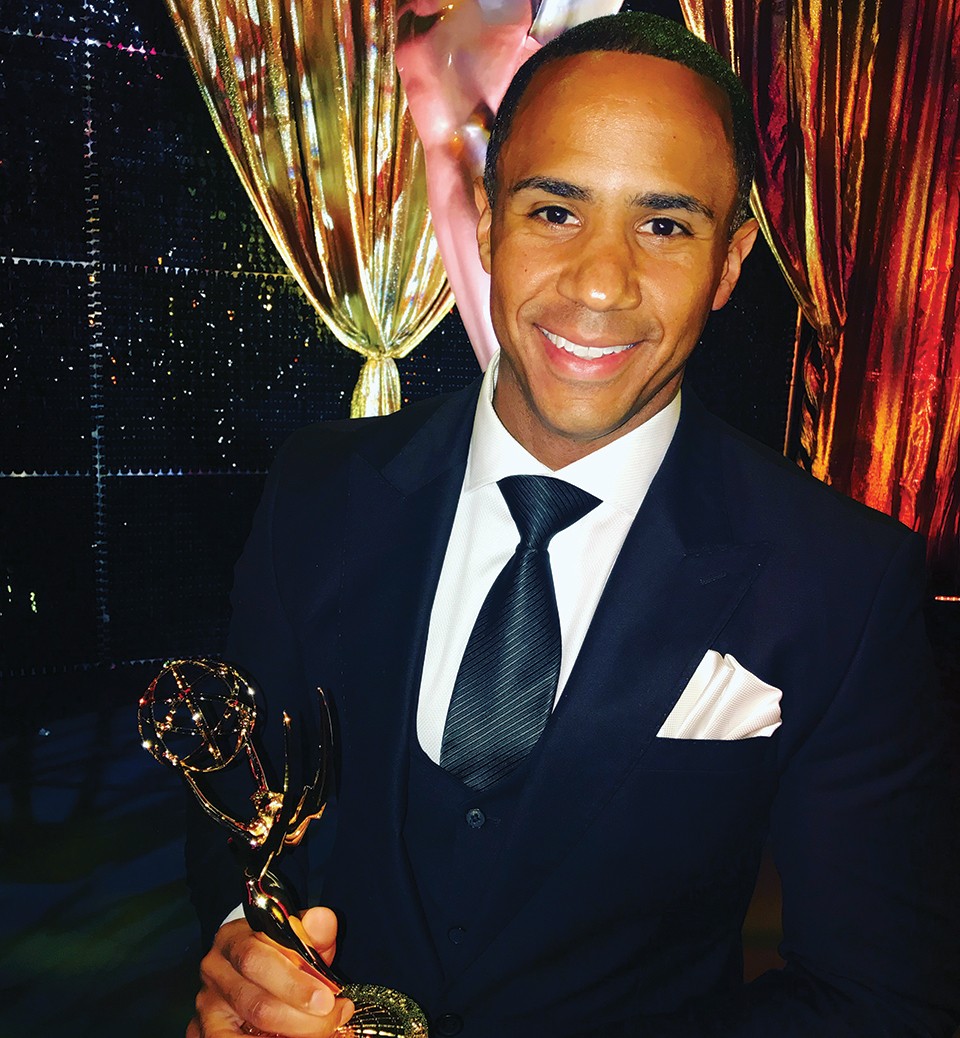 EMU alumnus Josh Landon with his second Emmy statuette. Landon won this award for his report on illegal dumping in Detroit, including his former neighborhood, for Fox 2 Detroit news.

Since entering broadcast journalism, Josh Landon (BA06) always wanted to hit the airwaves as a news anchor and reporter in his home town. He achieved that goal nearly three years ago when he left a Milwaukee TV station to join FOX2 Detroit. But he never expected his childhood home to become part of his news coverage.

Landon, 34, developed a news feature about widespread illegal dumping in Detroit. The story gave viewers an inside look at how Detroit police are tackling the problem. The piece aired last fall and earned an Emmy award in June from the Michigan chapter of the National Academy of Television Arts & Sciences.

The Emmy is Landon’s second. He earned his first by covering gang activities in Richmond, Va., in 2010 while working for TV station WRIC. But even if he wins a dozen more, Landon says his latest Emmy will always be the most special.

“That story represents who I am as a reporter in my home town,” says Landon, who earned a degree in broadcast journalism. “I grew up on Detroit’s east side, so the story was very personal for me. I take a lot of pride in that piece.”

In the feature, Landon covered the Detroit Police Department’s efforts to monitor illegal dumping and catch the offenders. As a native Detroiter, Landon added his own commentary, providing a sense of how dumping impacts residents.

“Illegal dumping in Detroit has been a problem for decades,” he says. “It impacts far too many neighborhoods. I saw sofas, mattresses, TVs, tires, construction debris—all sorts of stuff. And not just in abandoned lots, but also in abandoned homes.

“Many of the illegal dumpers are contractors. Their excuse is they don’t know where to take their debris. The real reason is they don’t want to pay a dump fee and they don’t respect the city of Detroit.”

After working on the story for a couple of weeks, Landon had the idea of returning to his childhood home. He knew it had been sitting vacant and used as an illegal dumping site for at least five years.

“Incorporating my former home into the story was a last-minute decision and it was the last footage we shot,” Landon says. “My photographer asked me to walk around the property and share my candid thoughts. Nothing was scripted.

“I grew up there from age 1 until I left for college. My mother kept the house up very well while she lived there. She sold it a year before I graduated from Eastern. I was shocked to see it when I first returned. The house isn’t among the worst in the neighborhood, but it’s headed down that path. It’s definitely heartbreaking. I hope it doesn’t get worse.”

Landon decided to begin and end the story with that footage. The personal touch undoubtedly contributed to the Emmy award.

Although it’s disappointing for Landon to see his old neighborhood in decline, he says it doesn’t diminish his love for working in Detroit.

“I always wanted to work in my home town, the place that inspired me to become a journalist,” he says. “It’s pretty wild to work with some of the people I grew up watching on TV. To have their respect and be treated as a peer is very gratifying.”