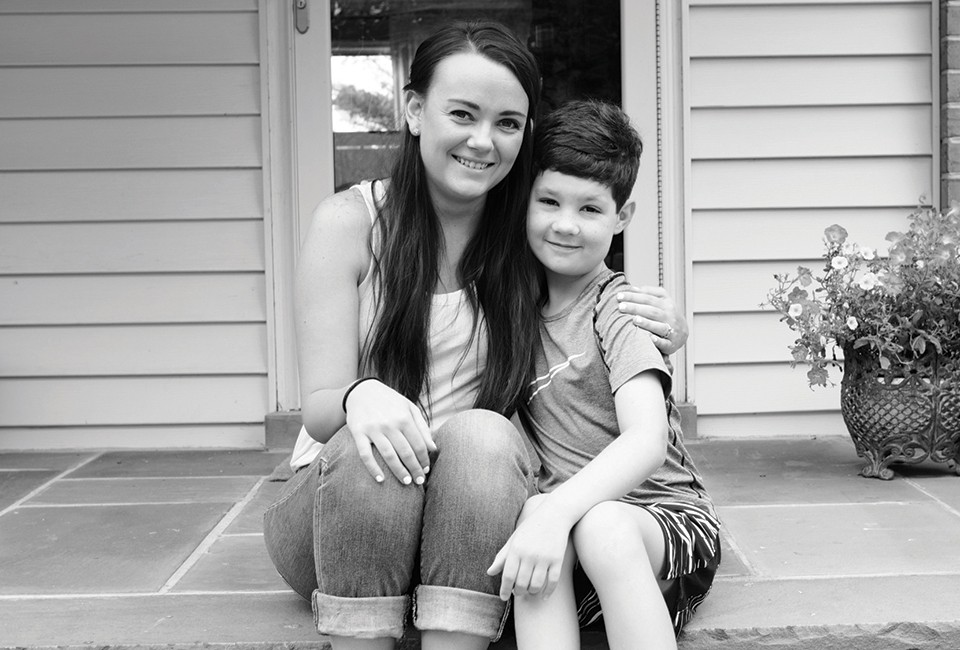 Alex (Momany) Palmer saved a life during the fall of her sophomore year, even though she didn’t know it at the time. She was early for her first class on a cool September morning, so she decided to stop by the Student Center for coffee. There, Alex saw a table for Delta Sigma Phi’s “Be the Match” bone marrow donor registration drive. She had heard of the drive when members advertised it to her own sorority, Sigma Delta Tau, so she decided to check it out.

The process was quick and easy. All Alex had to do was fill out a form and have her cheek swabbed before she headed to class. She never even mentioned the drive to her parents.

Alex had completely forgotten about it by the time she received a letter from Be the Match two years later, shortly before graduation. She was a potential match.

A confirmatory blood draw showed that Alex was the best match for the patient. Be the Match overnighted her a stack of information and paperwork. In a two-hour-long phone call, the registry staff went over every detail, cautioning Alex to consider her decision carefully.

During the call, Alex also learned about her recipient: he was a six-year-old boy battling leukemia. Without her marrow, he would not survive.

“I would have never been able to live with myself afterwards if I had said no,” Alex says, remembering her decision. “I knew what it meant for him and everyone around him. Transplants can fail and recipients may not make it even after the procedure, so I had to do everything in my power to save him.”

Alex chose a hospital in Cleveland to perform her donation. She was admitted overnight for tests before she met with the surgeon who would harvest her marrow. After being asked what felt like 10,000 times whether she was sure, Alex scheduled her donation. She graduated from Eastern Michigan University on Dec. 19, and returned to Cleveland for the procedure on Dec. 21, 2015.

The donation was a success. Despite overwhelming odds, Alex’s recipient went into full remission.

Last spring, she and her bone marrow recipient’s family connected in person for the first time. Alex had invited the whole family to her wedding so that she could meet them. In fact, the first meeting happened on Good Morning America, three days before the wedding.

“There’s a quote that reminds me of this whole experience. It says, ‘Courage is not the absence of fear. Rather, it is the judgment that something is more important than fear’,” Alex says, looking back fondly on the event, through the words of The Princess Diaries author Meg Cabot. “Seeing them all so happy while visiting them recently, those words kept running through my mind.”