Tylonn Sawyer is striking a chord with his figurative art, in Michigan and beyond 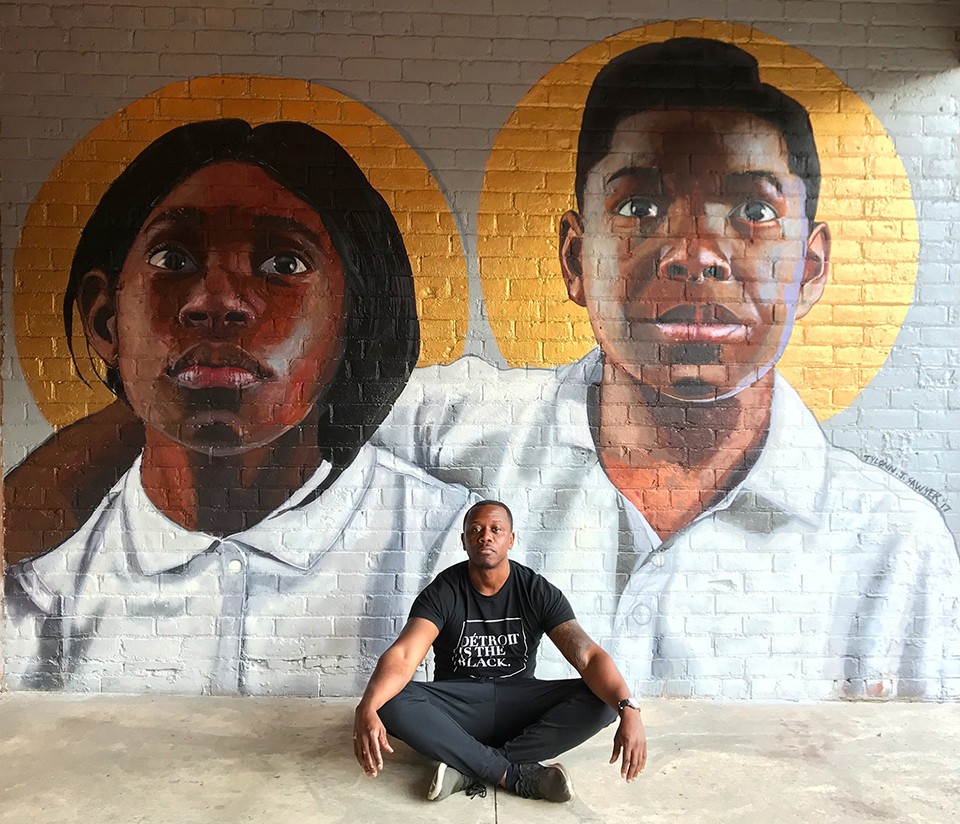 Tylonn Sawyer (BFA01) is a 2019 Kresge Artist Fellow, an honor that includes a $25,000 award and a year of professional practice support. (Photo courtesy of Tylonn Sawyer)

Tylonn Sawyer (BFA01) is turning the “starving artist” stereotype upside down while continually expanding his palette.

A Detroit-based figurative artist, Sawyer’s works have been featured in solo and group exhibitions nationally and internationally. Private collectors purchased his entire exhibition (nine drawings and 10 paintings) shown last summer at Detroit’s N’Namdi Center for Contemporary Art. Companies like Whole Foods, Red Bull and Under Armour have commissioned him to paint large-scale murals in and around Detroit.

“I consider myself a studio artist primarily working on canvas and paper,” says Sawyer, 42, who grew up in Detroit and Highland Park. “Murals are exclusively for-hire projects. If one comes up that matches my sensibility as an artist and is financially feasible, I’ll consider it.”

Not bad for someone who entered Eastern to study computer-aided design. That changed when he took a drawing class for fun as a sophomore.

“I already had an idea of how to draw the human body,” said Sawyer, who’d been drawing comic book characters since he was a kid. “After I got an A in the class, my teacher asked if I’d consider becoming an art major.”

“They each kept up hefty art practices in addition to teaching,” says Sawyer, who also teaches art at Oakland Community College and drawing at the College for Creative Studies in Detroit. “Washington’s classes were very rigorous and intense but the hard work paid off. By the end of the class, I could draw almost effortlessly. He’s uncompromising in terms of quality from his students. That ideology stuck with me.”

“I saw one of her paintings at a faculty exhibition and was blown away,” Sawyer says. “I took every class I could from her and Washington. When I was preparing for further study, Davis recommended that I pursue my master of fine arts degree from the New York Academy of Art Graduate School of Figurative Art.”

Last summer, Sawyer branched out into film. Teaming with filmmaker Jamin Townsley, he transformed his solo exhibition of paintings titled “American Gods: N/A” into a short film. Detroit’s Cobo Center commissioned the project and featured a portion of the film (along with several other film shorts by artists) last August on a large exterior video screen. The film also won the Short Film Award at the 2019 Freep Film festival.

“My art deals with the intersection of race, politics, pop culture and history,” says Sawyer, who recently completed a summer artist residency at Detroit’s Fisher Mansion. “Paintings can answer and evoke questions simultaneously.
My paintings often have plural meanings.

“Hopefully, I’ll continue making work that evokes emotional responses in viewers,” he adds. “I’m not a super-famous artist, but I make a living off something I like to do. It takes discipline and there are certain standards to meet, but it’s possible to live your life and create art without starving.”