For EMU alumna Celeste Malvar-Stewart, her farm-to-fashion is more than meets the eye 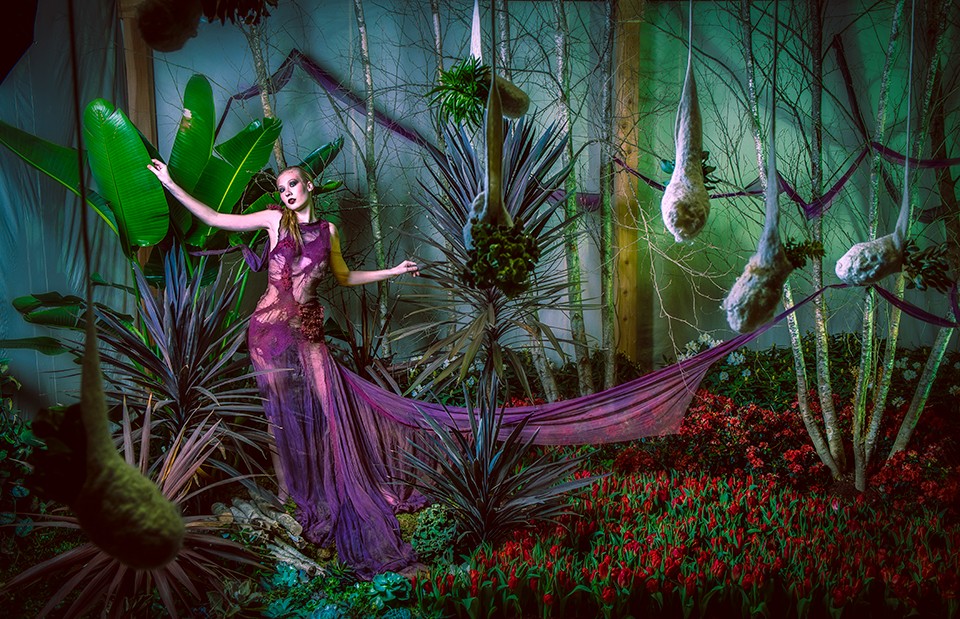 Hand-felted, naturally-dyed couture gown and hand-felted pods with succulents in a garden designed by landscape architect, Steve Maravich, made a splash at a collaborative show called “Fashion through the Garden.” PHOTO BY STALEY MUNROE

Celeste Malvar-Stewart meets a lot of sheep, but Gandalf—“Gandy,” for short—is special. Wise, winsome and fearless, his farmer refers to him as a “gentle giant.” Malvar-Stewart (MA10) can vouch for his soft ways, but she’s also created a full life for Gandalf, imagining his stately demeanor in human form to be that of a true intellect. She’s given him a voice (mature, dignified). She’s given him a profession (philosopher, or professor).

Gandalf is also special because he was Malvar-Stewart’s first Ohio sheep. His coat is sometimes mutable and weird, like good ol’ Gandy is playing a funny trick on the fashion and textiles designer. She uses his beige- and yellow-tinged fur—once curly, less so now as he’s aged—for her one-off farm-to-fashion couture and accessories, known for their sustainability and earth-friendliness. You’d never believe his dirty wool would turn a snowy white during the washing process, and neither did Malvar-Stewart, initially. But it does. Amused by this particular eccentricity, she gets a kick out of telling people, “He cleans up really nicely.”

For the Columbus Dispatch Home & Garden Show in February, the designer, working with the theme “Fashion Through the Garden,” incorporated pieces of Gandy’s wool into hanging planter pods, the perfect fit because of his crazy curls and infectiously positive energy. Her goal: to defy the expectations of spectators who eyed the pods from a distance, skeptical of their weirdness. Up close, she says, visitors embraced the pods’ peculiar beauty.

This sheep-human connection, which Malvar-Stewart has cultivated as part of her design work since graduating from Eastern Michigan University, is the foundation on which she creates. After she gathers wool on Ohio farms during shearing day, she hauls the hair to her studio to create pieces, including ready-to-wear clothing and pillows, under her label MALVAR = STEWART.

Fibers from alpacas and Angora goats also inspire and become her art, and every animal – she knows the names of all whose fibers she uses – is worth knowing, she says, as it “creates that bridge that can connect us to that piece.” She’s especially passionate about using wool from Lincoln Longwool sheep, as they’re currently on the Rare Breeds Survival Trust’s “critical” list: only 5,000 are left in the entire world. Gandy is one of them. “I feel like when I know one sheep, it creates a connection and it helps me to really have the desire to sustain the breed,” she says.

Furthermore, each dress she makes is distinct because the animal is: “A lot of times their energy is really visible and you can feel their energy in their fiber. I love to use that energy and that characteristic and their personalities to influence my design.”

At a farm in Medina, Ohio, she discovered the twirly locks of a sheep named Aurora. Aurora’s wool became a pillow that Malvar-Stewart, who tells the story with a riotous laugh, is leery of resting her head on because the farmer told her, “I actually had to sell Aurora because she was just so mean.” Aurora’s leftover wool was not used for a dress. It definitely couldn’t be used for another pillow. It couldn’t be used for anything – except a handbag. A very sassy handbag.

Design and nature, in harmony

Malvar-Stewart hadn’t thought for some time about the first garment she made: a mustard-yellow “crazy clown shirt” made of linen, adorned with giant black crystal-like glass buttons. Created while she was an undergrad in London, the piece “wasn’t a good look,” she says, erupting in a giddy laugh. Reminiscing, she realizes there’s always been a fantastical spirit in her creations – in the ones that turn out, and the ones that don’t.

Playing with the sheep and handling the fibers are the first steps in her great escape. The fantasy resumes in her shop at Hangar 391, located in Columbus’s historic German Village. The two-story, 19th-century building is spacious, homey and affordable (unlike her cramped, pricey, shared space in New York City). Her work and that of other local designers is on display downstairs. Upstairs is where she felts, weaves, spins and embroiders alone (save for Metric, her pug), the organic process and an audiobook taking her to otherworldly dimensions.

A thriving mecca for entrepreneurial designers and big-name national brands alike—both Abercrombie & Fitch and Victoria’s Secret have headquarters in or near the city—Columbus is recognized as one of the top-ranked fashion cities in the United States. Living in various places, Malvar-Stewart says, allows her to maintain a fresh creative perspective, while Columbus in particular allows her to “more thoughtfully develop my work by giving me the silence I need to explore and process my inner creative thoughts and ideas.”

“Celeste possesses an innovative approach and a commitment to her core values that is unmatched in the Columbus fashion scene,” says Kevin Terry Smith, founder of gender-equal clothing brand OLLY AWAKE, which Malvar-Stewart designs for. “Her studied craftsmanship and keen sense of balanced composition bring to our community a level of taste and sophistication that is rare to find, even in larger fashion hubs.”

The all-natural dyes she uses are derived from flowers, iron water, eucalyptus leaves and cochineal extract. She discovered the dye for a dress she made last year after wrestling black walnuts from a squirrel in a vacant parking lot because she thought they were poisonous (they’re not). Her fingers turned brown, and there it was: a dye for an ever-evolving, well-traveled, golden-brown dress she’d started to felt while on a trip with her husband in Verona, Italy, with wools from farms in Ohio, Michigan and Italy.

“Not only are Celeste’s collections visually stunning,” Smith says, “they offer the world an opportunity to see her vision for a harmonious relationship between our environment and fashion.”

A new perspective on her EMU past

Born in the Philippines, Malvar-Stewart grew up in San Francisco with little interest in fashion, favoring a lazy Sunday look: t-shirt and jeans. But she liked the way fabric felt, so in 1985, at the age of 18, she left California for London, earning a bachelor of applied arts degree in fashion at Regent’s University. She was already selling her work to stores across the U.S. by 2008, when she enrolled in EMU’s master’s program in apparel, textiles, and merchandising with an emphasis on sustainable textiles.

She was eager to investigate the finer details of design. How does a gown become a gown? “I felt like, ‘Oh, man, there’s a huge opening right now to experience creativity on a different level, because now I’m able to keep taking it down to its very substance,’” she says.

Malvar-Stewart was sold on EMU because the department head, Subhas Ghosh, had graduated from the University of Manchester in England, renowned for its textile program. But learning the scientific aspects through fiber and textile testing in a lab didn’t thrill her like designing did. Frustrated, she began to question her place in the program.

“I was fighting it when I was in the program, and I really, really appreciate it now,” she says. Aptly, she wrote her thesis on sustainability and independent designers interested in using material waste from larger corporations and manufacturing companies. “It taught me how to think differently and approach things differently than just from that designer perspective. It helped me to think in a different analytic way and consider a larger realm than just the fabric and the design and the pattern when creating.”

Since graduating from EMU, Malvar-Stewart has continued to create with the environment in mind, making eco-friendly decisions for all her creations: How can she eliminate waste? How can she minimize the carbon footprint? These ethical solutions are reflected with precision and passion in her handmade artwear—and not just in luxury dresses and sassy bags, but in rugs, bowls and even laundry balls.

Sometimes her own students at Columbus College of Art and Design, where Malvar-Stewart is an adjunct instructor in fashion design, give her a hard time. She gets it. She was a student once. “You don’t appreciate this now,” she tells them, reflecting on how her clown-shirt past became her refined future. “But you’re going to appreciate it at some point.”

Chris Azzopardi, a 2006 EMU graduate, is a freelance writer whose work has appeared in The New York Times, Vanity Fair and GQ.