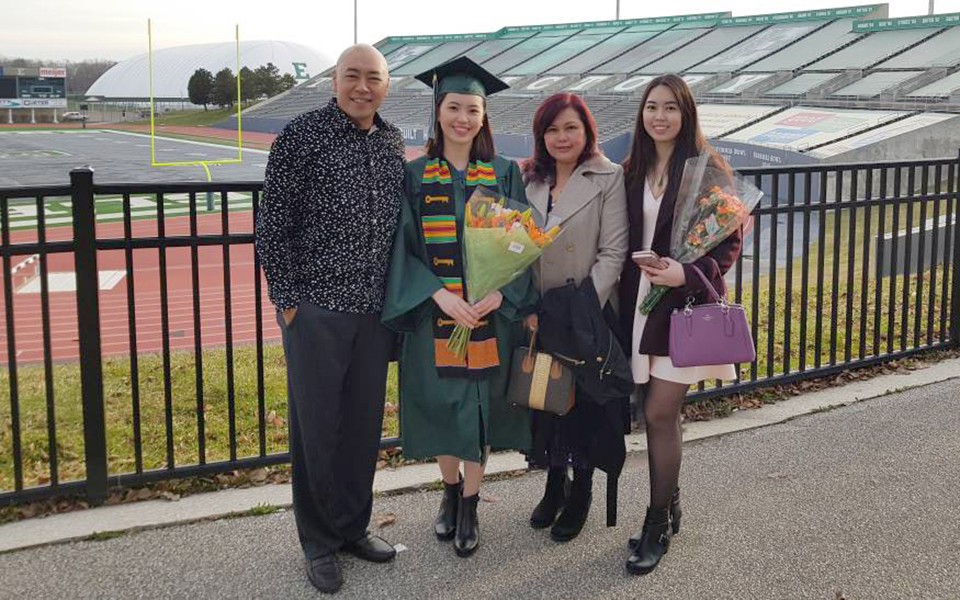 Alyssa at the commencement ceremony with her parents, Vincent and Cynthia Cheong Choo, and her sister Amanda.

It’s no surprise that Alyssa Sook Way Choo (BBA18) would travel from her homeland of Malaysia to pursue university studies at Eastern. That’s where her parents, Vincent Choo (BBA92) and Cynthia Cheong Choo (BS92, MA93), earned their degrees as well, and their Eastern experience left no doubt that they would encourage their offspring to follow suit.

“First, we love Michigan,” says her dad, “and we certainly felt that the education not only provided good learning, but the exposure we received to different perspectives of thinking allowed us to see many views in a positive way and build our entrepreneurial and people skills, too.”

He and his wife have become business as well as personal partners, serving for many years as the development agents for Subway in Malaysia. While Alyssa is currently working for her parents in the food and beverage industry, she says she plans eventually to be an entrepreneur and start her own company.

Much has obviously changed in the quarter-century since her parents’ college days, but Alyssa has a mostly positive perspective. “People are more open-minded, accepting and understanding towards other culture and races than they were then,” she says, “which I would say gave me the advantage of a better living experience while I was in the States.”

Alyssa did her share of contributing to that progress while at Eastern, serving as president of the International Student Association in her senior year. “It taught me to be a better leader,” she says, “and I gained many long-lasting friendships from all over the world. I loved being part of ISA because I got to share my culture, as well as learning new cultures from other people.”

And when the distance from her own culture began to weigh a bit heavily, she knew where to go. “I will always be grateful to the people in the Office of International Students and Scholars,” Alyssa says. “That was one of my comfort places. They take so much effort to make all the international students feel like they never left home in the first place. They are always welcoming and ready to help when there are difficulties. When you’ve come a long way from your home country, it’s nice to know that you still have a support system.”

The Choo family tradition will continue this fall when Alyssa’s younger brother, Dylan, “takes on the legacy to study at EMU as well,” as she puts it. “So, out of my family of five, four of us hold the true heart of an Eastern Eagle.” 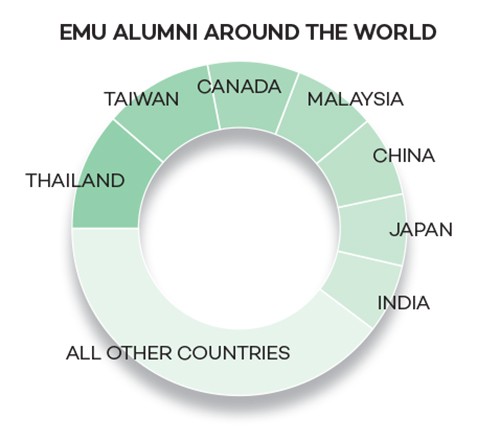 Eagles Around the World: Malaysia

Chew is now managing director of Pensonic Holdings, Malaysia’s biggest electrical home appliances manufacturer and distributor. “The College of Business was already quite dynamic back in the ’90s and I believe it is getting even better today,” he says. “The quality of the professors and lecturers was amazing. My four years in the business program made me who I am today, back in the Malaysian home ground, independent and disciplined.”

Ghani is the CEO of Bank Simpanan Nasional, a vast, government-owned bank headquartered in Malaysia’s capital, Kuala Lumpur. He credits his Eastern education with helping him “fulfill my career advancement in the financial industry,” noting that “the academicians were well equipped with the relevant industry experience to complement the textbooks.”