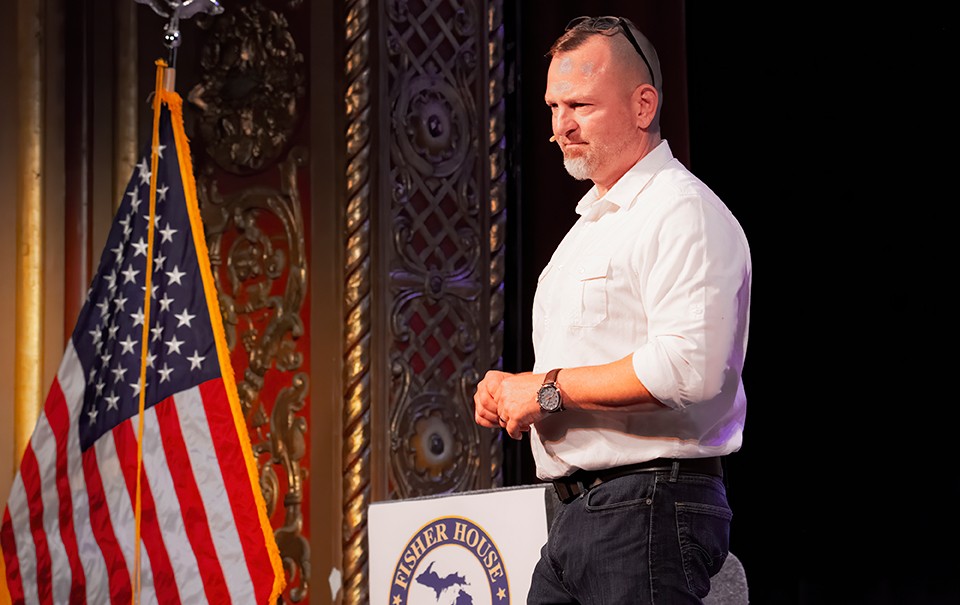 Dean Ditto shares his story of service at the Fisher House Michigan Stories of Service event. (Photo by Mike McManus)

YPSILANTI – A proud Eastern Michigan University alumnus with a rich family military history was a featured speaker Wednesday, Nov. 6 during a special Ann Arbor event to raise money for Fisher House, a facility that allows families to stay together when veterans require in-patient care at a VA Hospital.

Dean Ditto, who served four years in the Marine Corps, including Desert Storm, was among the performances at the annual Fisher House Michigan’s Stories of Service, held in the Michigan Theater.

Fisher House is like a “Ronald McDonald House” for military and Veteran families. The event helped raise awareness of and support for the Fisher Houses coming to the VA Ann Arbor Healthcare System and the John D. Dingell VA Medical Center in Detroit.

Serving around the World

During four years of active duty in the Marine Corps, Ditto deployed across the globe, serving in Panama, Thailand, Japan, Desert Storm, and more. He currently works in the automotive industry and resides in Brighton with his wife (his college sweetheart) and three children while coaching youth football, lacrosse and wrestling.

At the Stories of Service event, in addition to sharing his emotional story of near fratricide during Desert Storm, Ditto reluctantly opened his USMC Veteran heart to the audience.

With salty language only a Devil Dog could get away with, he described in detail what movies can never convey, said Kate Melcher, a fellow veteran and executive director of Fisher House Michigan who attended the event.

"He tried to break the intensity with self-deprecating humor, but the emotion of his story overwhelmed the audience," Melcher said. "The fog of war. The pain of the memories. The weight of the solemn duty to forever carry with him the names of his Marine brothers he lost. He repeated the names of his fallen brothers again and again."

In addition to being one of our featured storytellers this year, Ditto has become an advocate for Fisher House in his community, including being featured on a recent segment on Channel 4. He uses his social media platform to share content and events, and he invited Marines with whom he served to join him at Stories of Service.

"It was a reunion," Melcher said. "His Marines surrounded him as he told the toughest of stories. It was a wonderful testament to the power of the military family."

In a separate, earlier discussion, Ditto recalled his Eastern Michigan days fondly, noting how easy it was to become involved in the fabric of the University. He remains proud of his military tenure, noting that it’s hard for anybody who has not served to understand the mental and physical challenge and brutal nature of battle.

Ditto, who says he was not an eager student then, graduated from Lincoln Park High School in 1988 and joined the Marines, leaving for boot camp about three weeks after graduation. Although he says he enjoyed the Marines and considered re-enlisting, he hedged his bets by applying to Eastern in late 1991.

Ditto did his freshman campus tour in his “Charlie” uniform, got out of the Marines in August 1992 and two weeks later did freshmen orientation, living in Walton Residence Hall.

During his time at Eastern, Ditto became involved in a number of extracurricular activities, including serving as a Student Government Senator for four years, working as an active member of Chi Gamma Iota (Student Veteran Honor Fraternity) and playing intramural sports.

He joined the Lambda Chi Alpha fraternity, which at the time occupied the house at 605 West Cross Street, across from Pease Auditorium. While in Lambda Chi Alpha, he served as in a variety of leadership positions, including rush and social chair and vice president of the Interfraternity Council.

He worked his way through college and after receiving a job offer at Jackson National Life doing Y2K remediation on mainframe computer systems, he left EMU with less than ten credits to go for graduation.

He spent two years at Jackson National Life, before doing stints at various other companies.  For the last six years, Ditto has worked for Global Team Blue.  He’s now the VP Director of Production Integration, overseeing a host of projects and productions and integration with various partner marketing agencies in delivering advertising and technology for Ford Motor Company.

Ditto came back to Eastern to earn those final credits and graduated in 2002, majoring in psychology and minoring in communications.

“I had an amazing  experience at Eastern,” he says now. “I had a lot of fun, and learned a ton about myself. Of my closest friends, 22 years later, many are from EMU.”