Wu is the Ph.D. program director for Eastern's School of Nursing, and director of the Healthy Asian Americans Project (HAAP), an innovative program established in 1996.  She joins four other professionals appointed by the governor to the commission.

The 21-member state commission, which meets four times per year, works toward equal participation of Asian Pacific Americans in Michigan. Wu, a resident of Ann Arbor, will serve a four-year term that expires Nov. 30, 2016. 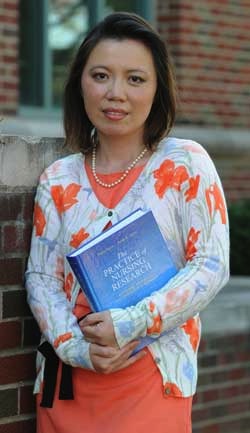 Tsu-Yin Wu, professor and program director in the School of Nursing, has been reappointed to Asian Pacific American Affairs Commission

"These appointees bring years of diverse and outstanding experiences to the commission," said Snyder in a press release. "They are great choices for these roles and I am thankful for their willingness to serve."

The commission develops unified policies and a plan of action to serve the needs of the state's Asian population, and advises the governor and the legislature on the coordination and administration of specific state programs.

"This reappointment serves as a platform for me to convey what we are discovering in the community with regards to Asian Americans in Michigan and state government," says Wu. "I have an opportunity to continue to be a strong advocate for Asian Americans, and professionally I am able to represent the voice of nursing on this commission."

Wu's work as HAAP director also has prepared her for her work on the commission, she says, because she understands the issues facing Asian American women and breast cancer.

In 2002, Wu found a lump in her breast that eventually was diagnosed as benign. After consulting with numerous physicians, she finally found a doctor who would conduct a thorough screening.

"Many doctors were telling me that since I am Asian and under the age of 40, chances were so low that the lump was malignant, and there was no reason to do a screening," Wu said. "But I needed to know for sure."

The lack of screening within the Asian American population and her own situation prompted Wu to develop HAAP. HAAP provides training for physicians, and an educational outreach program to Asian American women in an effort to encourage them to be proactive about their health, especially when it comes to breast cancer.

"As a nurse, and bilingual Asian American, if I was having a hard time advocating for myself, I knew there were others," said Wu.

"When you are feeling fine, the idea of going to a doctor and facing cultural obstacles and language barriers seems exhausting," says Wu, "but that is when we need to be going to the doctor.  Many Asian Americans wait until it is absolutely necessary, which is too often too late."

Wu also has reached out to women in China who face the same issues as Asian Americans. In 2012, HAAP received an investment from the Susan G Komen Foundation to begin an international initiative in China and Taiwan.

"The need is there," Wu said. "Cancer develops at a younger age for Asian women, and there is a lack of education and screening for cancer control."

The framework is similar to what Wu began in Michigan. The program trains local women, usually cancer survivors, to become lay health advisers who promote education and advocate early detection.

"We've also trained more than 300 physicians to perform breast cancer screenings in the more rural regions of China," Wu said. "Nearly 6,000 women will benefit from the education and screenings."

The project is currently underway in the cities of Xian, and Shanghai, but Wu hopes to convince other agencies, like the Komen foundation, to recognize the need to expand the program into more regions.

As a member of the state commission, Wu looks forward to making a difference in the Asian American community.

"The commission hopes to continue to provide a voice for underserved Asian Americans, and bridge the gap between community and government," Wu said.

According to Wu, the commission's goals for this term include looking into other areas such as mental health.

"We want to talk with Asian American families in Michigan, and listen to their experiences," said Wu. "We want to discover where intervention may be needed as young students tackle a variety of issues such as bullying or racial discrimination."