BLISSFIELD, MICH. – Gary Koppelman didn’t know that a conversation he had back in high school would end up changing his destiny and lead him down the path of teaching science. But forty years later, he’s sure glad it did.

“Growing up, I never seemed to measure up to those around me,” said Koppelman. “High school was difficult for me because of various learning disabilities that I didn’t know I had and I didn’t do very well in many of my classes, so I never thought college was an option for me.

“But, one of my teachers encouraged me to try college for at least one year. He was an Eastern Michigan graduate and said I should consider Eastern because of its excellent elementary education curriculum. So I followed his advice, applied and was pleasantly surprised when I was accepted.”

Then, after teaching elementary science for four decades, Koppelman got another surprise as he learned he would be the recipient of a prestigious national science teacher award. 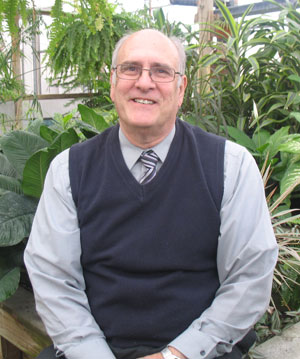 Shell Oil Company and the National Science Teachers Association honored Koppelman with the 2013 Shell Science Teaching Award for the positive impact he has had on his students, school and community through exemplary classroom science teaching.

He received the national award at a special banquet and ceremony held this past April in San Antonio, TX, along with a $10,000 cash prize from Shell.

Koppelman has been teaching fifth grade science at Blissfield Community Schools in Blissfield, Mich., since 1973. He graduated from Eastern with a Bachelor of Science degree in 1973 and completed his master in elementary education in 1976.

Koppelman remembers another fortuitous experience that greatly affected him when he was just a freshman at Eastern.

“One of the first classes I took was teaching of reading and the professor required the class to come into her office to phonically read a list of nonsense words,” said Koppelman. “I told her it was hard for me to read these words and I wouldn’t normally read aloud and was petrified to do so. As I went through the list, she asked me to repeat several words. She discovered that I had dyslexia and also had an auditory discrimination problem and ended up giving me several strategies and tools that helped me overcome my disabilities.”

Koppelman says his disabilities still cause him some problems today, but they have become the components that he uses to help his students overcome their weaknesses.

“Realizing that my weaknesses could be overcome, and finding success in doing things that I love doing, albeit not in a traditional way, but in a unique and creative way, has helped me become the person and the teacher I am today,” he says.

Koppelman teaches his students in the school’s 2,400 square foot named Blissfield Environmental Life Lab (BELL), a building he envisioned and developed. The lab is equipped with an arboretum and terrarium furnished with a freshwater stream and pond, a butterfly house, saltwater ecosystem, an aviary, a herpetological area and an invertebrate zoo. The facility is the only one of its kind in a public school setting in the nation.

“What better way to teach science to students than by giving them the opportunity and freedom to explore firsthand, with real-life experiences,” Koppelman said. “I use a hands-on, minds-on approach to the curriculum,” he says. “My students are transformed into scientists, botanists and zookeepers through the various experiments they conduct, through observations they make, and through the interactions they have with the animals and plants that they help take care of in the lab.”

Many of Koppelman’s former students have credited his positive influence in helping shape their lives. They have gone on to become industry leaders and educators in the fields of animal science, biology, chemistry and physics.

“As a student in Mr. Koppelman’s fifth-grade science class, I became intrigued with science,” said Jodi Sterle, associate professor and swine specialist at Iowa State University. “The hands on approach he used in class sparked an interest in reproduction and fetal growth for me that subsequently led to a career within the swine industry.”

Koppelman says it’s his love of science that drives him to seek more knowledge, resources and funding so he can inspire this same passion in every single student he teaches.

“I am ecstatic to have received the science teaching award for doing something that I truly love to do,” said Koppelman. “Impacting my students lives along the way, and helping them find truth and discovering life is what true science is all about.”

For more information about the teacher education programs at EMU, visit the College of Education homepage or visit the Blissfield Environmental Life Lab homepage.