YPSILANTI - Signing up for a government program or medical benefits can be complicated for most people, but when you are an immigrant who doesn’t speak the language or understand what you’re reading, it can drastically affect your welfare. 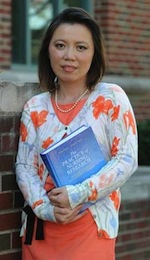 Tsu-Yin Wu, a professor of nursing at Eastern Michigan University, has had her work recognized by the White House and the State of Michigan

Tsu-Yin Wu, a professor of nursing in Eastern Michigan University’s College of Health and Human Services, and director of the Healthy Asian Americans Project (HAAP), has solved part of the problem for Michiganders from various Asian communities.

With a grant from the federal Center for Medicare Services (CMS), Wu has developed a Michigan navigator program for underserved Asian communities. She recently won $107,000 as part of a three-year grant earmarked for the program. Although Michigan’s program is part of a tri-state initiative with Ohio and Illinois, it is the only state to receive a grant this year.

“The grant allows us to recruit bilingual representatives who are trusted in their respective communities, for the role of navigator,” Wu said. “The navigators are trained in the fine points of health care issues including the federal Health Insurance Marketplace program, and go on to serve their communities.”

The Marketplace program helps those without employment-based health insurance by offering coverage through Medicare, Medicaid, the Children’s Health Insurance (CHIP) program and other sources.

There are myths and misinformation in the Asian communities about the health care act and other benefits, said Wu.

“In many cases, an individual or family may receive a notice in the mail about health care benefits,” she said. “They often do nothing or toss the letter away because he or she can’t read or understand the language. Many people even lose their chance to sign up for Medicaid because they missed the deadline.”

The Michigan program is based on HAAP’s previous program of research - lay health advisors - where bilingual representatives completed the federally-facilitated Health Insurance Marketplace assister and state Medicaid training, and earned certification as navigators.

“The state’s navigators provide culturally and linguistically appropriate public education about the Marketplace and state programs,” said Wu. “They also respond to questions about the application, selection and enrollment processes, and assist consumers in selecting the appropriate health care coverage, along with any needed referrals.”

In an effort to get people to sign up for healthcare by this past January 31 deadline, The White House Initiative on Asian Americans and Pacific Islanders kicked off its third annual Week of Action to urge Asian Americans and others to get health insurance.

One means for getting the message out was a White House blog with a video highlighting two navigators, including Krishna Bista from Grand Rapids.

In Michigan, navigators work closely with members of the Vietnamese, Burmese, Nepali, Korean, Bangladeshi and Chinese communities. This year, thanks in part to the grant, the program will specifically focus on three hard-to-reach groups  - the Nepalese, Bangladeshi and Vietnamese.

“The navigator program definitely has made a difference in the Asian immigrant communities,” Wu said.  “More of the underserved are getting benefits. Our goal was to serve 600 people, but we have exceeded that number in the last two open enrollment periods. We may serve up to 1,000 people because we are working in the communities, so more people can benefit for other programs, such as state-expanded Medicaid and CHIP.”

Currently, HAAP’s navigators are based in Grand Rapids, Ann Arbor and the metro Detroit area. Detroit is home to a large Chinese population, members of which speak Mandarin, China’s official language, or Cantonese, which is spoken in Hong Kong, Macao and China’s Guangdong province. In this case, two navigators, each speaking one of the two languages, are needed.

Bista, the Nepalese navigator from Grand Rapids who was highlighted in the White House blog, has seen many clients who have never made doctors’ appointments, dealt with medical bills, or knew how to apply for health insurance.

In an interview with the White House blogger, Bista talked about a woman whom he met at a Nepali store. After speaking with her, Bista discovered that the woman did not have health insurance for herself or her baby. He assisted her in enrolling for insurance and submitted the application within less than a week.

Wu, a commissioner on Michigan’s Asian Pacific American Affairs Commission, remains committed to increasing the number of community members taking advantage of healthcare opportunities and her navigator program is a great start.

About Eastern Michigan University
Founded in 1849, Eastern is the second oldest university in Michigan. It currently serves 22,000 students pursuing undergraduate, graduate, specialist, doctoral and certificate degrees in the arts, sciences and professions. In all, more than 300 majors, minors and concentrations are delivered through the University's Colleges of Arts and Sciences; Business; Education; Health and Human Services; Technology, and its graduate school. EMU is regularly recognized by national publications for its excellence, diversity, and commitment to applied education. For more information about Eastern Michigan University, visit the University's website.