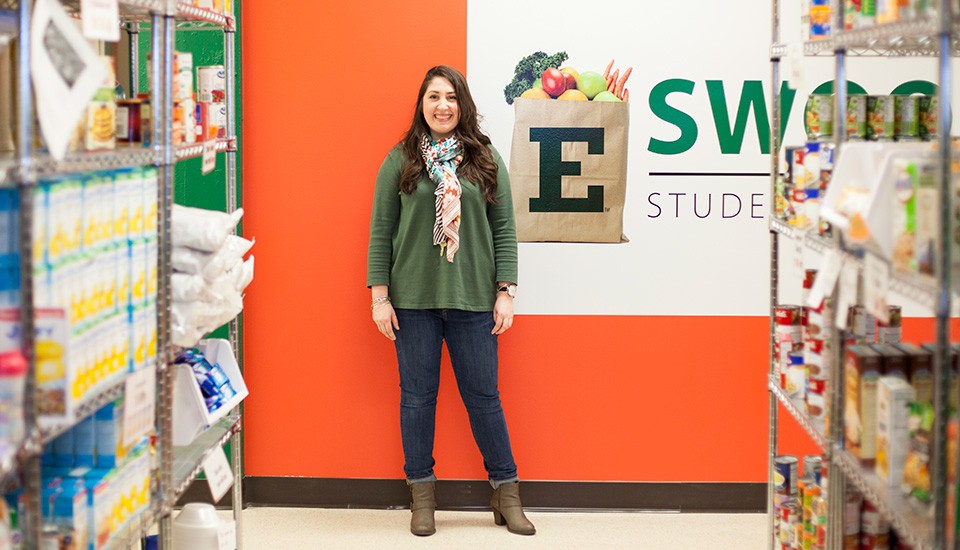 Haley Moraniec has been named a Newman Civic Fellow for her work to open Swoop's Student Food Pantry.

Haley Moraniec, a graduate student in social work at Eastern Michigan University, has been named a Newman Civic Fellow in honor of her exceptional campus service in opening Swoop’s Student Food Pantry at Eastern two years ago.

Campus Compact, a Boston-based non-profit organization working to advance the public purposes of higher education, named Moraniec among the 273 students who will make up the organization’s 2017 cohort of Newman Civic Fellows. Moraniec was one of only nine students named from the state of Michigan.

EMU President James Smith praised the fortitude and persistence of Moraniec, who recently graduated from Eastern and is now a first-year student in the EMU masters of social work program.

“Haley Moraniec led EMU to a university-wide cultural transformation on how we see, support, and understand our students,” President Smith said in a statement nominating Moraniec for the award. “Haley recognized that the needs for food access for our own EMU students were not that dissimilar to the needs of local low-income residents. A first generation college student who has had to work to finance her own college journey, Haley understood the struggle of students in balancing learning and everyday living.

“Most critically, Haley understood that many of our students could not always pay for school, and also pay for food. Working through many university systems over two years, Haley launched EMU's first food pantry as a way to off-set the cost of living while learning. Many students create thoughtful programs throughout their college tenure, but Haley created something foundational, a food pantry that will provide support and access to students for years to come.”

Moraniec says she developed a passion for food justice when she served as a Volunteer Coordinator for EMU volunteer center, VISION. She was inspired by community-based organizations such as Growing Hope and Earthworks Urban Garden that fight for food justice. She began researching how other universities combat barriers that students face to college completion, and subsequently learned about campus-based food pantries.

“EMU's student population is both racially diverse, and economically challenged,” she says. “Seventy percent of EMU students work 30 hours or more a week, mostly to pay for college. Many EMU students use their money for tuition, and do not have extra money to feed themselves.”

In 2013, she wrote a proposal to the administration for a student food pantry and worked to get it launched for several years. Following a presentation to the University’s Board of Regents, she was able to forge a partnership with a local food rescue organization, locate space, devise policies, train workers and organize food drives.

“EMU opened the doors to Swoop's Student Food Pantry on September 21, 2015,” Moraniec notes. “Since opening, the pantry has had over 2,000 student visits and provided 32,000 pounds of food.”

The Newman Civic Fellowship, named for Campus Compact co-founder Frank Newman, is a one-year experience emphasizing personal, professional, and civic growth. Through the fellowship, Campus Compact provides a variety of learning and networking opportunities, including a national conference of Newman Civic Fellows in partnership with the Edward M. Kennedy Institute for the United States Senate. The fellowship also provides fellows with access to exclusive scholarship and post-graduate opportunities.

“The cultivation of community-committed leaders has never been more crucial,” said Campus Compact president Andrew Seligsohn. “We rebuilt the Newman Civic Fellowship experience because our country needs more people who know how to bring communities together for positive change. We are thrilled to welcome this group of 273 exemplary students as the first cohort to participate in this new model.”

The Newman Civic Fellowship is supported by the KPMG Foundation and Newman’s Own Foundation.

Campus Compact is a nonprofit coalition of more than 1000 colleges and universities committed to the public purposes of higher education. As the only national association dedicated to this mission, Campus Compact is a leader in building community engagement into campus and academic life.  For more information, visit the Campus Compact website, and follow @Campus_Compact on Twitter.