The challenge: Design an urban, aerial transit system for a major city 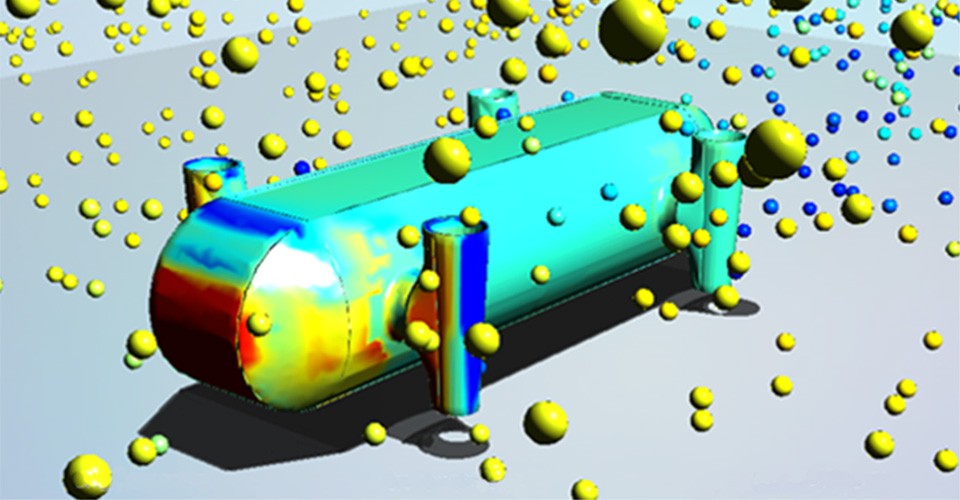 The flying bus designed by EMU students is shown here being subjected to an aerodynamics simulation test.

YPSILANTI – A team from Eastern Michigan University finished in the top five of a national University Student Design Challenge sponsored by NASA.

The team of Jared Powell, Donnie Anderson, Blake Hendrix and Dominic Lesniak, all physics majors at EMU, was among five finalists. During the four-month competition, 16 teams of students designed concepts for using aeronautical vehicles as a means to travel within a city.

The EMU team developed an aerial-based transit system for the city of Atlanta. They devised a flying bus, using electric fans, that would land vertically. The students also had to account for how the transit system's network and infrastructure would function.

The project fulfilled the physics major capstone course taught this past semester by Professor Dave Pawlowski, in which students apply what they’ve learned in other coursework during a semester project.

The NASA competition began in mid-January, and included two virtual preliminary design reviews, with a final report due in mid-April. At the end of April, finalists presented their concepts to a panel of NASA experts.

“We had to use everything we’ve learned,” said Powell, who served as team leader. “This was very different from other courses – we got to work together on a tangible, real-world problem.”

Powell, who is captain of EMU’s club rugby team, graduated in April and plans to earn his master’s in physics at Eastern. After that, he plans to earn a Ph.D. in physics, with an eye on an academic and research career.

Pawlowski, who’s been at EMU seven years, said the team worked independently and effectively during the exceptional learning experience.

“They were always on top of things,” he said. “I just asked questions, and their response was usually, ‘Yeah, we’re thinking of that.’”

The first annual NASA University Student Design Challenge was open to teams of sophomore through senior undergraduate students in accredited U.S. academic institutions. A team from Cal Poly Pomona won the event, with Ohio State University second. Along with Eastern, two teams from North Carolina A&T State University were in the final five.

The competition was sponsored by the Glenn Research Center, which designs and develops innovative technologies to advance NASA's missions in aeronautics and space exploration. The Center is located in Cleveland.

“As NASA continues to make flight cleaner, safer and more fuel efficient, it’s important that the nation is developing a future workforce with strong science, technology, engineering and math skills,” said Ruben Del Rosario, director of aeronautics at Glenn. “We value the creative ideas and unique perspectives that students can offer us in overcoming aeronautics challenges.”