Strong Hall renovation, set to begin this summer, will include some preservation of murals 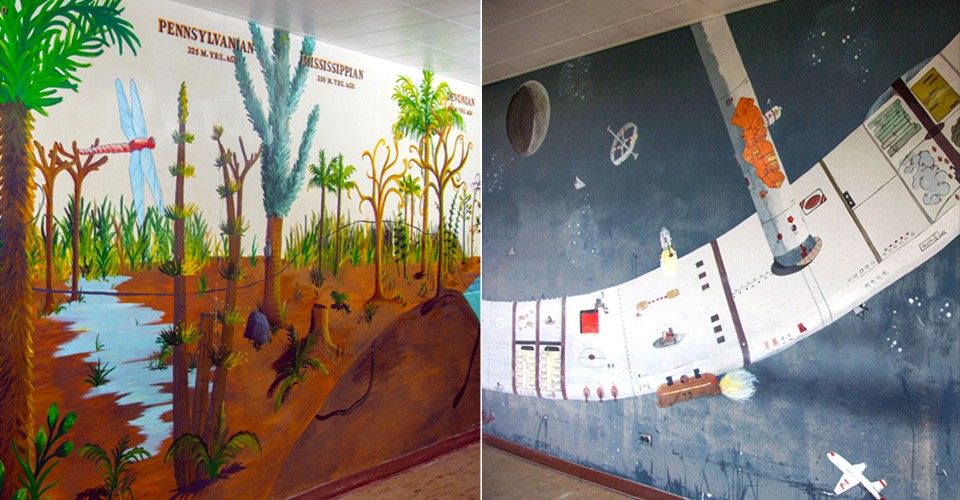 Tammy Reid created the historic timeline mural and several other creations in Strong Hall as a work study job in the early 1980s.

YPSILANTI – Since the early 1980s, a trip through Strong Hall’s first floor has offered a dazzling trip back in Earth’s history—to an era when Tyrannosaurus Rex battled Triceratops to the death, and huge, cold-blooded winged creatures ruled the skies.

A walk down the building’s south hall takes you from the beginning of life through various eras—Cambrian, Triassic, Jurassic, Cretaceous (T Rex’s time)—to the dawn of man.

That historic timeline is one of several creations in the building by Tammy Reid, a talented undergraduate art student in the early 1980s who had the ultimate work-study job—to paint murals to brighten the halls of Strong Hall.

Among her creations, she painted that geological time line, along with the plate tectonics mural in the cross hallway of Strong Hall, a cloud mural, and a spaceship display in the west end hall.

“At the time, I was 21 years old with a little boy,” Reid (now Tammy Tabor) says now. “I painted every weekend and many evenings while my son rode his Big Wheel (tricycle) around in the halls.”

Tabor, a young mother and wife with a second baby on the way, left EMU after three years without graduating. But she returned to Strong Hall last summer, and was gratified to see her creations still adorning the walls.

Now, with an extensive renovation of Strong Hall set to begin this summer, her creations will be preserved in several ways.

The paintings, along with the several others done by classmates, will be displayed in photographs at the EMU Archives. In addition, the EMU Physical Plant is having Tabor’s work photographed, with the images to be incorporated into the renovation by applying the digital imagery into a wall protection product for a high traffic area. EMU will also utilize the digital imagery for vinyl wall covering in conference rooms and/or areas with less traffic volume.

That’s good news to Tabor, who completed her remarkable works while living in EMU married housing.

She was a fine arts major, with a strong interest in the Earth sciences. One day, Carl Ojala, a renowned and beloved former EMU professor of geology and geography, noted the drab walls in Strong, wondering if anything could be done—something interesting but factual.

“I offered to do the ecology timeline,” Tabor recalls now. “I just sat down and said, ‘I’m gonna do a timeline.’ It historically represents years and years of nothing, then into the water and out, on to the dinosaurs and then finally, the first days of man. I had a blast doing it.”

After working 20 years in Traverse City in auto finance (“I had to get a real job when I was single for a time,” she says.), Tabor returned here briefly last summer when her husband took a job in the area. She found her artistic work intact, and savored the images.

“It was still there, and it brought back a ton of memories,” she says. “I’d work on it nights, weekends, much of it with my son there.”

Tabor now lives on the shore, in North Carolina’s southern Outer Banks area. Her kids are grown, and after all those years in the auto business, she’s enjoying a return to her creative roots.

She has an art studio and sells her paintings, mainly beach scenes, by word of mouth to friends. She painted 90 works last year, and sold 60. You can check Tabor’s work on her gallery Facebook page.

“I have really good memories (of EMU),” she says. “We had our own little garden at Cornell Housing. Some of my best friends are from Eastern.”

And there’s the glowing satisfaction of having created something significant and dazzling, much of it in the company of a young son in a Big Wheel, zooming around Strong Hall.

“Hey, I painted a 72-foot mural that's still there after 30-some years,” Tabor says with wonder. “Can you imagine all the students who have viewed it over the years?”