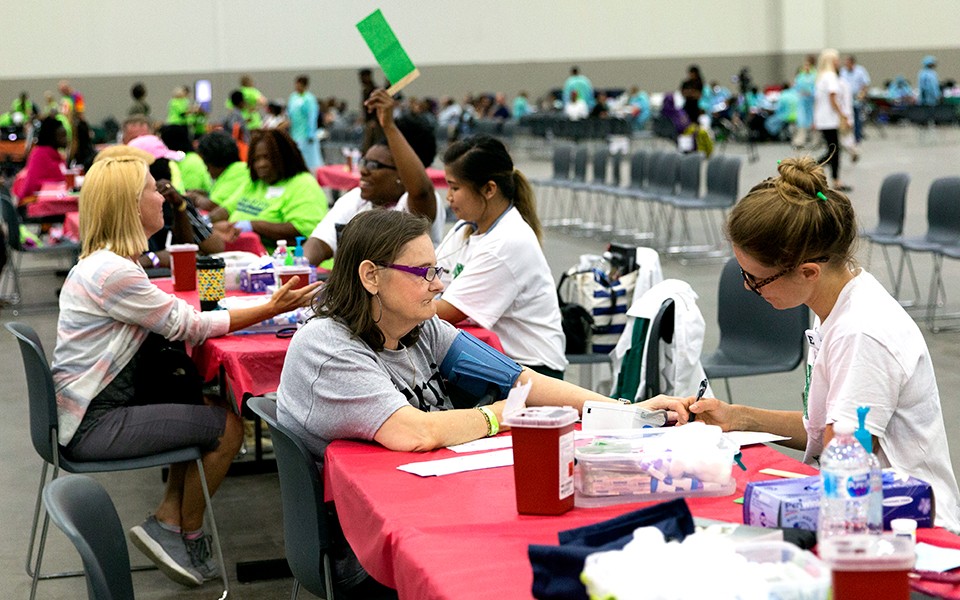 The Motor City Medical Mission has a clear goal: “To bring health, healing and hope to Detroit” in offering free dental, optical and medical care to anybody who shows up.

“We nurture the restoration of the whole health of individuals - the physical, mental, social and spiritual aspects,” reads the mission statement on the event’s website.

This August, Eastern Michigan University nursing students were a vital part of that effort, helping counsel and treat some of the thousands of people who showed up at Cobo Center August 9-11.

In all, the EMU School of Nursing took nearly 40 students to the mission, covering more than 60 volunteer spots over the three days of a remarkable event that filled one of the massive display halls at the Cobo Center in downtown Detroit.

Sherry Bumpus, director of graduate nursing studies at Eastern and the organizer of EMU’s effort at the mission, said the scale of the mission and the many patients who attended helped make students aware of their role in filling the broad community need for healthcare–a vital bit of perspective in their professional development.

“This really opens up students’ eyes in terms of how many people need care, how many they can help, and how they can help,” Bumpus said. “It serves to further their education in the most hands-on way, and has had an impact on every one of them.”

Bumpus said EMU was the first Michigan school to reach out to the event planners and offer to work with them.

Along with the direct roles at various stations, EMU students helped patients in other, special ways.

provided translation for a number of immigrants/refugees who spoke no English at all.

“She spent the majority of the day (Thursday) translating,” Bumpus said. “Later in the day, two other EMU students (Jimis Shukri and Israa Berro) also we're pulled to that area. Being a nurse, understanding the language of healthcare and being bilingual was truly an asset in this setting.”

In addition, EMU students were part of the group who assisted when a woman collapsed in the dental treatment area and needed to be transported to a hospital with chest pain, Bumpus said.

Susan Maycock, an EMU alum and longtime nurse in the Detroit area, marveled at the roles Eastern students played the event.

“They’re doing a fantastic job,” she said. “Their skills are right where they should be, and they are asking appropriate questions (of patients). I’m proud of how they are representing EMU.”

Cain praised the quality of the faculty at Eastern, along with the rigor of instruction she’s received, noting that the faculty inspired her to pursue gerontology.

““This program has been fantastic for me,” said Cain, who’s already earned a masters and doctorate in nursing and previously practiced as a woman’s health nurse practitioner. “EMU has responded so well to me as an adult learner … I’ve had a lot of academic homes. But I didn’t walk in here thinking I had it all figured out.”

Kristina Danko, a second-year nurse practitioner master’s student, noted the huge attendance at the mission and the lines of people waiting before 5 a.m. just to ensure they could be seen. According to Danko, this illustrated how many “have fallen through the cracks” in our current medical and insurance system.

Stefanie Davis, a classmate of Danko’s, called the experience “eye-opening” and said she intends to return to the mission and other such events as an established health-care provider. “You can (sense) all the good you’d be doing,” she said.

Danko echoed the thought as she looked around the hall, packed with patients and hundreds of volunteers.

“I’ll definitely come back here after graduation,” she said.