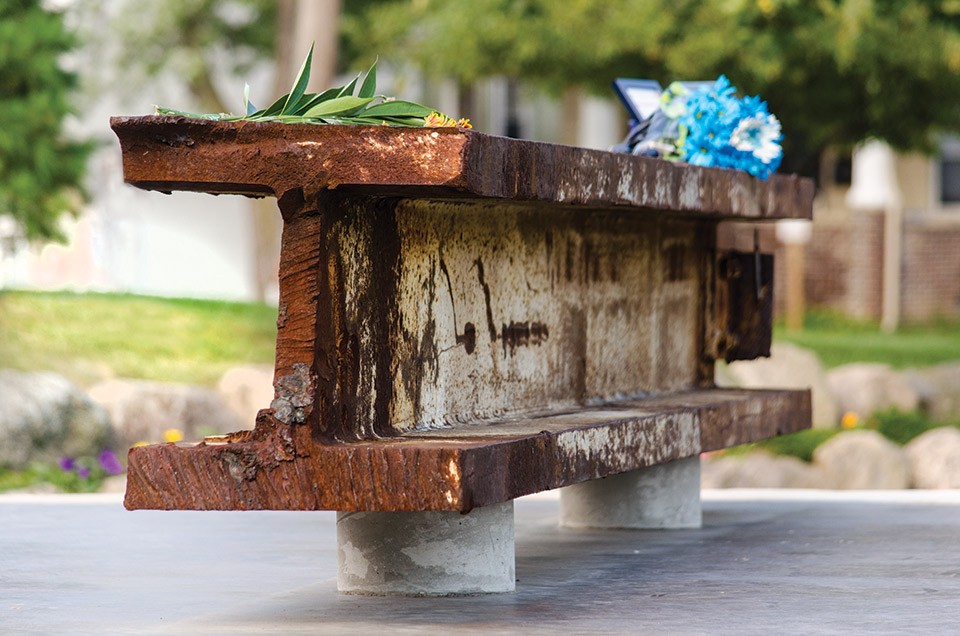 A 14-foot steel support beam from the World Trade Center rests on Eastern Michigan University's campus. The University recognizes the anniversary of 9/11 each fall, and individuals pay their respects in unique and personal ways. (Photo by Paul Vuocolo)

The short ceremony will include the National Anthem, a moment of silence, taps, a prayer and words of perspective, and a chance to explore the memorial, which features a large steel beam from the South Tower of the World Trade Center.

The 14-foot steel support beam weighs about 6,800 pounds, and is pockmarked with dents made from molten metal falling on the beam. Written on the side is "south," which is presumed to mean the South Tower, the second one hit but the first to collapse.

The number "74" inscribed appears to mean the 74th floor, just several floors from the 78th floor, where the second plane crashed into the tower. A side on one end of the beam is simply sheared off, testimony to the overwhelming forces at play in the collapse of the tower.

The Pease site, situated in the low-lying, southeast corner of campus and partially shielded by trees and tucked into a hill, offers an ideal venue for experiencing the memorial in a setting that can offer quiet and individual reflection.

Founded in 1849, Eastern is the second oldest university in Michigan. It currently serves more than 21,000 students pursuing undergraduate, graduate, specialist, doctoral and certificate degrees in the arts, sciences and professions. In all, more than 300 majors, minors and concentrations are delivered through the University's Colleges of Arts and Sciences; Business; Education; Health and Human Services; Technology, and its graduate school. EMU is regularly recognized by national publications for its excellence, diversity, and commitment to applied education. For more information about Eastern Michigan University, visit the University's website.