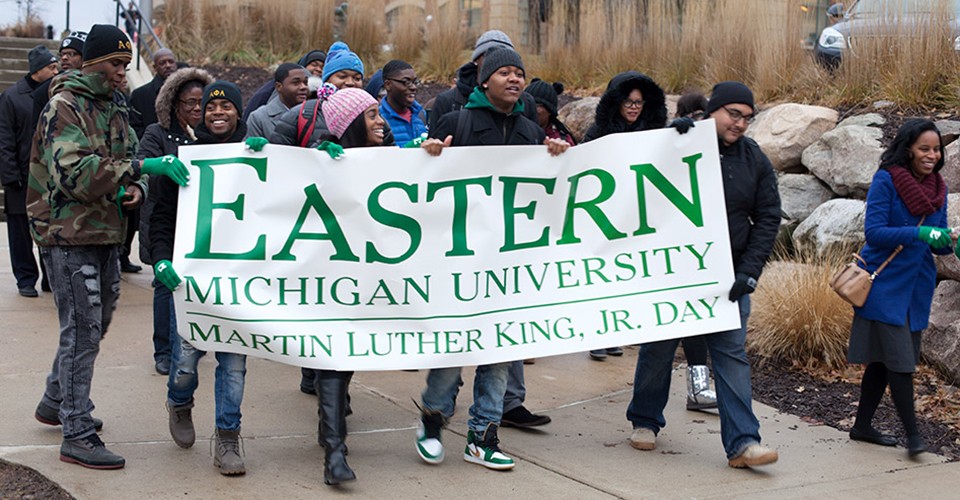 YPSILANTI – Joy-Ann Reid, a political analyst for MSNBC and host of “AM Joy,” has been selected as the keynote speaker for Eastern Michigan University’s 32nd annual Martin Luther King Jr. Celebration, scheduled for January 11 - 16, 2018.

Reid will give the MLK celebration keynote address on Monday, January 15, 2018 in the Student Center Auditorium at 900 Oakwood St. Ypsilanti, Mich.

Reid, whose show airs Saturdays and Sundays, is also the author of the book “Fracture: Barack Obama, the Clintons and the Racial Divide” (William Morrow/Harper Collins 2015), co-editor of “We Are The Change We Seek: The Speeches of Barack Obama” (Bloomsbury USA), and a columnist at The Daily Beast.

She was previously the host of “The Reid Report,” a daily program that offered Reid’s distinctive analysis and insight on the day’s news. Before that, Reid was the Managing Editor of theGrio.com, a daily online news and opinion platform devoted to delivering stories and perspectives that reflect and affect African-American audiences.

Reid graduated from Harvard University in 1991 with a concentration in film, and is a 2003 Knight Center for Specialized Journalism fellow. She resides in Brooklyn with her husband and family. You can follow her on Twitter and Instagram at @JoyAnnReid and “like” her page on Facebook.

The year 2018 marks the 50th anniversary of Dr. King’s assassination, which occurred on April 4, 1968, along with the founding of the Martin Luther King Memorial Center in Atlanta 50 years ago, on June 26, 1968.

Subsequently, on November 3, 1983 President Ronald Reagan signed a bill establishing the third Monday of every January as the Martin Luther King Jr. National Holiday, to begin in 1986.  On January 20, 1986, the United States celebrated the first national observance of the King Holiday, which also marked the first annual MLK celebration by Eastern Michigan University.

The theme for EMU’s 2018 MLK celebration is “Live the Legacy: Look Back, Be Present, Move Forward.” The theme and keynoter were selected by the MLK Celebration Planning Committee after receiving recommendations from over 200 students, faculty, and staff last spring.

“From the beginning, our goal has been to involve the campus community in the celebration planning process,” said Jieron Robinson, co-chair of the MLK Celebration Planning Committee.  “We are excited that Joy-Ann Reid will serve as our keynote speaker. Joy has broad insights and perspectives that will inform and inspire our campus community.”

Reid will speak briefly at the annual MLK President’s Luncheon at Eastern, an event widely attended by community leaders and EMU students, faculty and staff to honor the life and legacy of Dr. Martin Luther King Jr. Following the luncheon, Reid will deliver the MLK keynote address, and end her day meeting with a selected group of students for further interaction.

EMU’s MLK celebration – one of the most extensive in Michigan – will take place from January 11-16, 2018 with a variety of events occurring over the six days. Nominations for the annual MLK student and community humanitarian awards will be sought later this fall.

“EMU is proud to be planning for our 32nd MLK Celebration program.” said Ellen Gold, co-chair of the planning committee. “We look forward to providing a wide range of activities that acknowledge and celebrate the legacy of Dr. Martin Luther King Jr. and invite our campus and community members to join together in this important celebration.”