Program in response to increased demand in United States and internationally; EMU is first university in state of Michigan to create bachelor’s degree in the field 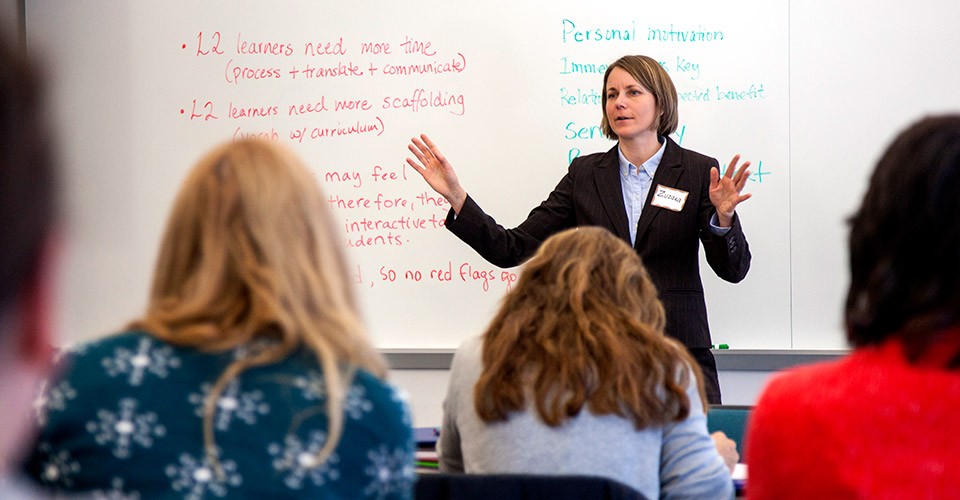 YPSILANTI – Students at Eastern Michigan University will be able to earn a Bachelor of Arts degree in Teaching English to Speakers of Other Languages (TESOL) under a new program approved Friday, Feb. 9 by the Board of Regents.

The program, approved at the Board’s regular meeting, is designed for students who want to engage with international populations in the United States or abroad.

In 2007, the Michigan Department of Education approved undergraduate programs certifying English as a second language. EMU had a minor in Bilingual Education at the time, but immediately created a minor in TESOL to meet state needs. Enrollment in that program has grown from 12 students per semester to more than 100. EMU becomes the first institution in the state of Michigan to offer a bachelor's degree in the field.

More than 94 percent of EMU graduates with the TESOL minor pass the Michigan Department of Education certification test in English as a second language. Initially, job placement overseas was high, but today governments such as China and Korea are requiring a BA degree.

In addition, states with high diversity such as Florida, Texas and North Carolina recruit teachers from EMU. Given the current interest in the minor, and the expansion of jobs in English as a second language immigrant education and expanding programs in countries like Korea and China, the World Languages Department at Eastern projects 22 U.S. majors graduating within two years, increasing to 50 within four years.

The major will require students to complete 36 credit hours. Students will hone their knowledge of English language structures and discover how language and culture influence each other in a variety of settings in the U.S. and around the World. Upper level classes will focus on teaching methods and practice.

The program’s faculty plan to market the degree internationally, bringing students from partner institutions in China, Poland, Japan, the Czech Republic and Korea.

The new program aligns with the University's #YouAreWelcomeHere campaign that seeks to recruit and retain international students and ensure they flourish academically and socially at Eastern.

Founded in 1849, Eastern is the second oldest university in Michigan. It currently serves 20,000 students pursuing undergraduate, graduate, specialist, doctoral and certificate degrees in the arts, sciences and professions. In all, more than 300 majors, minors and concentrations are delivered through the University's Colleges of Arts and Sciences; Business; Education; Health and Human Services; Technology, and its graduate school. EMU is regularly recognized by national publications for its excellence, diversity, and commitment to applied education. For more information about Eastern Michigan University, visit the University's website