Other major projects on tap include renovation of Sill Hall, the Rec/IM Building and Quirk Theatre as University invests in strategic growth 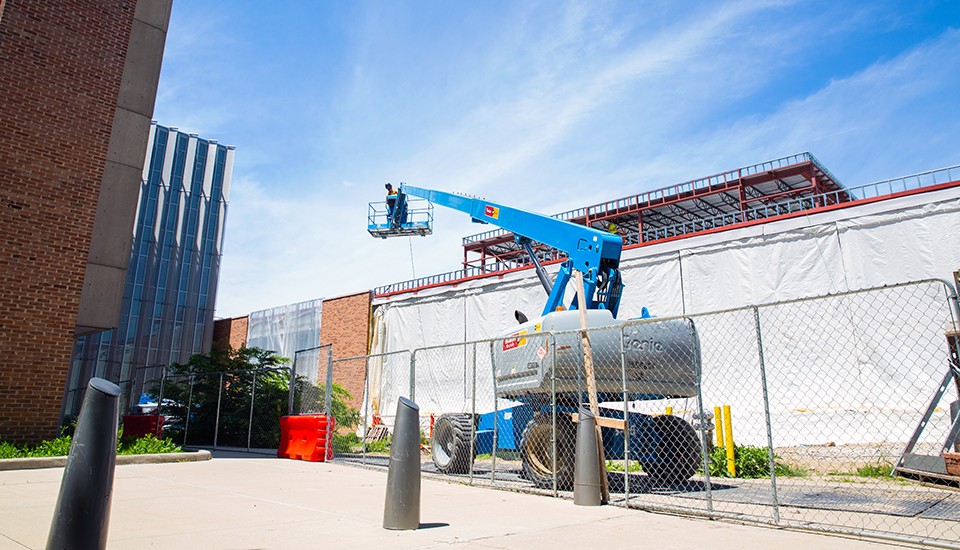 The University continues to strongly invest in campus facilities and infrastructure to create a better experience for its students. This includes massive investments and construction of a new state-of-the-art Science Complex, with first-class, high tech labs and research centers.

The complete rebuilding of Strong Hall, the third and final phase of Eastern’s Science Complex, leads the way during the flurry of summer construction activity. But there are plenty of other projects that reflect the University’s clearly articulated emphasis on strategic growth as it invests in a vibrant future.

Here’s an overview of the initiatives, including new dining features, underway on the 800-acre Eastern campus:

• This is a complete building renovation and addition for a crucial facility that houses numerous labs for STEM classes, and which represents the third and final phase of the Science Complex. Construction started in fall 2017, and in progress are installation of structural steel, installation of the exterior façade, interior build-outs, mechanical and electrical systems and roofing. The total building enclosure will be completed early fall 2018, with substantial completion and occupancy to begin at the start of the winter 2019 semester. The project is part of the capital outlay plan of the state of Michigan, which is paying for three fourths of the project cost, or approximately $30 million.

• The project will include all new interior renovations to the dining area, the exterior south façade and it will also introduce outdoor seating and a fireplace. The enhancements are scheduled to be competed for the start of the fall 2018 semester.

• These two improvements will establish access to the new health center, a collaborative project with St. Joseph Mercy Health System and IHA that is planned to begin construction this year. The road project involves building a new section of roadway and lighting to Lyman Street starting this summer. That extension will connect Oakwood Street and Mayhew Drive just north of the Department of Public Safety building at the northwest end of campus. As part of the Lyman street extension, a new turn lane will be installed at the entrance to Green Lot 1 off Huron River Drive. The turn lane will be completed by the start of the 2018 Fall semester. The Lyman Street extension is expected to be completed in October 2018.

• This project involves replacing and installing new lighting and security throughout the Cornell Courts complex, the south section of Oakwood Street and along the perimeter of Green Lot #1. Included in the Green Lot #1 work scope is the installation of fencing and decorative fence columns. Substantial completion is set for August 2018.

• This project on the EMU theatre venue involves installing new windows and replacing the old concrete, cast-in-place building panels with new insulated metal panels. The project also includes much-needed foundation and drainage repairs. The project’s design is completed and the project is out for bid. Substantial completion is planned for the end of August 2018.

• The tear off and replacement of the roof of this classroom and lab building was completed in May.

• The project involves installation of new flooring in the building, including common areas and classrooms throughout the college. The project will also include some miscellaneous painting and ceiling tile replacement. Substantial completion is set for August 2018.

• The project involves undertaking a condition assessment of exterior masonry structural systems in the College of Business that will prioritize miscellaneous masonry exterior façade repairs. The assessment is to be completed at the end of June 2018 with repairs to start following recommendations.

• The elevator controls associated with the Pray Harrold elevators will be repaired. Substantial completion is set for August 2018.

• The project is for replacing and installing new electrical panels throughout the building. Substantial completion is set for August 2018.

• New shower valves and access panels will be installed in all the adjoining dorm bathrooms. Substantial completion is set for August 2018.

• The project will include installation of a new façade to the existing retaining wall, stairs, lighting, landscaping and adjoining sidewalks. The project will also include new drainage and miscellaneous structural repairs. Substantial completion is set for August 2018.

• The project involves replacing 58 furnaces and installing smoke detectors throughout the complex. Substantial completion is set for August 2018.

• Project involves installing new flooring and painting in the corridors. Substantial completion is set for August 2018.

• This major project involves the renovation of and an addition to the home of the College of Technology. The University has completed the selection of the project team, which is IDS Architects and Clark Construction. The group is presently working on the program verification, to be followed by the development of the design. Early construction is targeted to begin January 2019, with substantial completion set for July, 2021. Eastern, which made Sill Hall its top priority in this year’s outlay request to the state of Michigan, is awaiting a decision on funding. The University will fund the first phase of the project, at a cost of $3 million.

• A major renovation and expansion of the Rec IM building is planned, a project long sought by students. The building will remain operational as the phased construction takes place. EMU has completed the selection of the project team, which is TMP Architects and Granger Construction. Program verification is underway. Substantial completion is set for summer 2021.

• The project, which is to include substantial fundraising support, includes a new, approximately 60,000 square foot building along with a new scoreboard, each located on the north side of Rynearson Stadium. The facility includes a new weight room, equipment room, training and nutritional space, football locker room, coaching locker room, coaching offices and team meeting spaces, including a team lounge. The project team is Barton Malow Company as the construction manager and IDS Architects. Construction activities are set to start at the end of June, with substantial completion scheduled for July, 2019.

• The project involves a build out of the fifth floor of the Mark Jefferson Building to accommodate lab and classroom space for the new fermentation science and neuroscience programs. An architect has been selected, and the plan is to start construction in Winter 2019, with completion set for the beginning of the Fall 2019 semester.

Starting this fall, the Eateries, located between Phelps, Putnam, Walton and Sellers residence halls, will offer a coffee and breakfast feature for guests at Eagle's Grind.

• The Grill 734 location at the Eateries will feature fresh-pressed sandwiches and made to order pasta dishes. New featured items there will include the Gimme S'more sandwich, featuring roasted marshmallows, Nutella, graham cracker crumbs and cinnamon butter on Texas toast; and the Ann Street Melt, loaded with fresh chicken breast, American cheese and caramelized onions on Texas toast. Also featured at this location will be a build your own pasta location, a campus favorite.

• The Cluck and Create and Chop'd & Wrap'd dining features will stay at the Eateries and undergo new updates and continue to incorporate student favorites into their menus.

• The Market will be a new concept at The Eateries. In previous years the grab and go snacks and bottled beverages were located in the middle of the open space at the eateries. Starting this fall, the Market will be a separate store, to give guests the experience of shopping in a convenience store.

• The actual act of ordering food will be new and improved this year at the Eateries. Guests will order food from Cluck, Grill 734 and Chop'd & Wrap'd via kiosks. Orders will be placed and payment accepted at each kiosk to add another layer of convenience for students. The kiosks will accept meal swipes, flex plan and credit cards. The Eagle's Grind and The Market will have a traditional check out procedure and will accept cash, credit, meal swipe and flex.

The Student Center will retain its hit dining features of Smashburger, Starbucks, Sono (Latin food), Mondo (subs), Build (pizza by design) and the Hasty Rabbit (subs and sushi). But the floor is being redone, and Chartwells, Eastern’s dining services partner, is installing a new, sociable seating feature called bookable boxes. The three bookable boxes will each fit four to six people, and can be used as a meeting space, a fun lunch spot or a hangout area. Each one will have a slightly different theme – a dry erase board, a TV for presentations or video games.