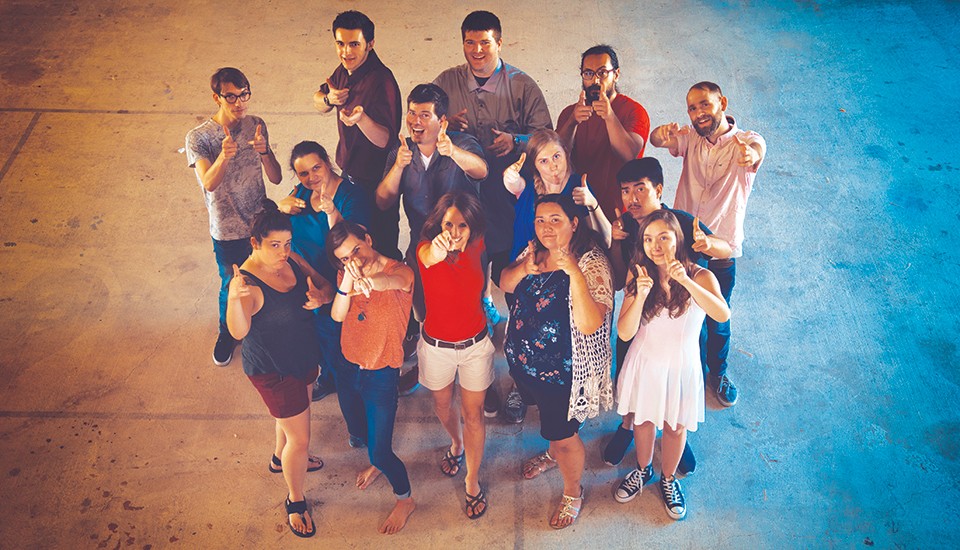 First Productions, LLC, is comprised of EMU alumni and current students primarily from the Electronic Media and Film Studies Program.

This article appears in the inaugural edition of 'Revisited,' a publication dedicated to Eastern Michigan University's alumni.

If there’s a group of resourceful filmmakers who could make a splash in the movie industry without relying on the sway of Hollywood insiders, it’s WSF Productions.

In just three years, the youthful team of about 20 Eastern Michigan University alumni and current students is earning awards at local film competitions and screenings at prestigious film festivals.

To date, WSF (a shortened form of “Who Shot First,” their original company name) has released six short films, which are gaining additional exposure on social media. Now the team is raising the bar, aiming to produce and release a feature-length film in the near future.

“We loved filmmaking as students and want to continue doing it,” says WSF President, Officer and founder Allie Romero (BS14). “Compared to Hollywood, there aren’t a lot of filmmaking opportunities in Michigan. But we’re creating opportunities for ourselves here. We want to make a difference on filmmaking as a whole and for filmmakers themselves.”

Romero and nearly all the WSF team members first met as Electronic Media and Film Studies majors at EMU. For an independent study project, Romero recreated an episode of the 1950s situation comedy “I Love Lucy” to demonstrate her film production skills. Many of her classmates contributed their talents to her project.

After graduating, Romero didn’t think she’d work with those classmates again. Nearly a year later, she learned about the YPSI 24-Hour Shootout, a competition that supports independent filmmaking in southeast Michigan. Teams in these types of contests typically deliver a final film within a limited time (in 24 or sometimes 48 hours) that incorporates a list of required “ingredients.” These could include a line of dialogue, a prop, a location or a character. The challenge requires teams to think on their feet and produce a highly polished product without the benefit of advance planning.

“I put out a Facebook post about the 2015 Ypsi Shootout and tagged everyone who worked with me on the ‘I Love Lucy’ project, asking if they’d like to join me,” says Romero, 25. “To my delight, many responded and were eager to participate. The majority were friends from my higher-level film production classes at Eastern.”

The group entered “Trust Me,” a five-minute short centering on belief, confidence and betrayal. Although it didn’t win any prizes, the team enjoyed the experience and pursued additional competitions.

“The 2015 Ypsi 24 was our first project and we were just figuring everything out,” says Jake Weber (BA15), a WSF member and officer. “Overall, that film was a great team building experience.”

The following summer, the group collaborated again—this time on the Detroit 48 Hour Film Project. Their entry “My Way Out” won Best Drama and took second place for Best Film. A few months later, the group participated in the 2016 YPSI 24-Hour Shootout, entering “The Case.”

At that point, the loosely organized group had coalesced into a team of about 20 active participants, mostly Eastern alumni who had graduated after 2014. Their members include writers, actors, directors, producers, production assistants, film editors, graphic artists, location managers, makeup specialists—all the personnel needed to create a sophisticated film.

“After our first few competitions, we pulled back and decided to put some effort into original projects where we’d have more time to shoot and produce our own material,” Weber says. “We have a core group of talented people who work well together. They come in, take a role and own it. We know we’re capable of producing some great stuff. That’s how WSF started.”

After formalizing WSF, the ambitious group put its creativity into overdrive. They spent five months making their next short film, “Voyager,” then 11 months on “Small Fish,” their biggest production to date.

“Filmmaking is a very collaborative endeavor,” says Weber, who serves as a director, director of photography, editor and associate producer. “We do everything internally, from initial brainstorming to post-production. I do most of the shooting, lighting and editing. I try to leverage my technical skills to see if we can present the script material in a realistic manner.”

With Romero as the main producer and group leader, WSF submitted “Voyager” for entry in several film festivals. The Orlando Film Festival and Capital City Film Festival (in Lansing) screened the film in October 2017 and April 2018, respectively.

“’Voyager’ was our first non-competition based film, and getting it into the Orlando Film Festival was a very exciting moment,” Romero says. “We were very proud of this huge achievement in our first year of creating original work.”

“When we finished ‘Roadmap’ and turned it in for the Detroit 48 competition, we were blown away by what we had created through the chaos,” Romero says. “During the award ceremony, we were excited and nervous but still full of pride for our work. Being recognized in five categories made that chaotic weekend an experience none of us will ever forget.”

WSF also began sharing its work on social media, launching accounts on Facebook, YouTube, Twitter and Instagram. In addition to their film shorts, their posts include trailers, “behind-the-scenes” documentaries of their filmmaking process, and profiles of individual WSF team members.

“We lean toward promoting our films on Facebook because of its massive audience and ease of video sharing,” Weber says. “’Roadmap’ has been our most successful film yet in terms of public reaction. It’s been viewed more than 10,000 times on Facebook.”

For all their success, WSF has yet to earn a profit. Or break even.

“Funding is a challenge,” Romero says. “We pay for most of our work out of our own pockets, with some contributions from generous sponsors. Jake has his own equipment but brings it for our use. We ask for donations on our Facebook page.”

Right now, passion fuels their work more than dollars. Most WSF members have day jobs and spend time filming in the evening or on weekends.

“Eventually, we’d love to make a full-length feature and sell it at a profit to someone like Netflix or Amazon,” Weber says. “But for now, we give our time and get material for our portfolios. After graduating from college, a lot of people spend years trying to get a job in the film industry. We make films to continue practicing our craft and developing as creatives.”

“Our goal is to make sure everyone gets experience that they can take with them to future productions, even if it’s not with WSF,” Romero adds. “If you love what you’re doing then it’s not a job. We don’t work, we pursue our passions.”

That creative drive was evident long before WSF shot its first reel of film. Keith Damron, associate professor of Electronic Media and Film Studies, taught many WSF members in his classes at Eastern.

“They were students who extended themselves beyond the classroom,” says Damron, who worked in the Los Angeles entertainment industry as a production engineer, television writer, story editor and program director before his teaching career. “They pushed themselves by becoming involved in ETV programming and in covering Eastern sporting events for ESPN3. Although those aren’t feature film productions, it requires commitment to a schedule and achieving a level of excellence.”

Damron remains connected with WSF as a mentor and finds their work impressive.

“Their films are outstanding, both contextually and technically,” he says. “Camaraderie is very important in the filmmaking business, and they function very well as a team without any ego problems. It’s about character, heart and soul, and they certainly have all of that. You can always tell when someone’s got it, and this is a group that’s going to make it. The sky is the limit for them.”

The path to bigger success may be social media exposure, which is opening new avenues for aspiring filmmakers. As the Hollywood Reporter noted in a March 2016 issue, traditional studios are investing up to $1.5 million to produce feature-length films for YouTube filmmakers with large, devoted social media followings.

“We’re a group of young, ambitious filmmakers trying to find our way by using new media,” Weber says. “We’re going about that process in a way that’s different from previous generations.”