War hero and Eastern alumnus Charles Kettles, who was awarded the country’s highest military honor, passes away at age 89 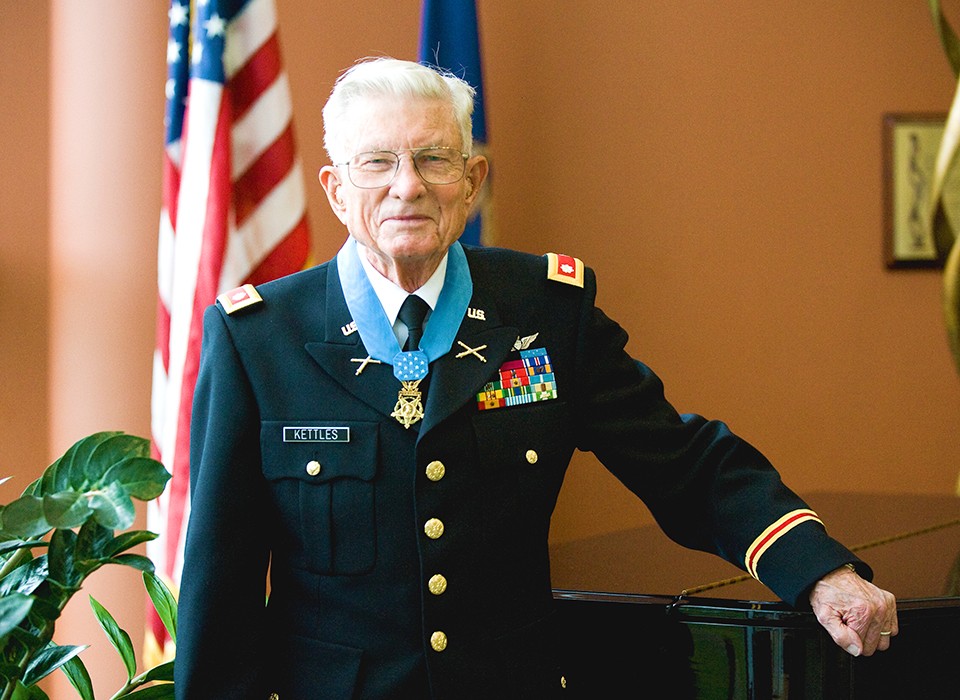 YPSILANTI – Eastern Michigan University alumnus Lt. Col. Charles Kettles, a Vietnam war hero who received the military’s highest distinction, The Medal of Honor, passed away Monday at his home in Ypsilanti. He was 89.

Kettles, who distinguished himself in heroic combat operations in Vietnam, also has a deep history with Eastern, which named its Military and Veterans Service Center after him in 2016.

In awarding Kettles the Medal Honor in 2016, President Barack Obama noted his courage and valor in saving the lives of 40 soldiers and four of his own crew members on May 15, 1967, during fierce fighting near Duc Pho, Vietnam.

Kettles, a helicopter pilot, repeatedly flew into a valley to save soldiers who were under heavy fire. Later, Kettles earned a master’s degree at Eastern Michigan’s College of Technology, teaching students there while developing the University’s Aviation Management program.

"We are deeply saddened to hear of the passing of Lt. Col. Charles Kettles, and will always remain so grateful for his profound contributions to our country as well as his deep history with Eastern Michigan University,” said President James Smith. “Lt. Col. Kettles' actions in Vietnam were exceptional in terms of his bravery, his focus and his sense of duty. He stands as an inspiration to all of us, for his valor as well as his deep humility over what seemed to him the natural thing to do for his comrades.

“The University treasures its connections to Lt. Col. Kettles, which include his tenure in the College of Technology, the naming of our Military and Veterans Service Center in his honor and awarding him an honorary Doctor of Public Service degree in 2016, which I had the privilege of personally presenting to him in his home."

During the Eastern Michigan naming ceremony, Michael Wise, Assistant Director of Military and Veterans Affairs at Eastern, spoke of Kettles’ exceptional bravery and of the inspiration he provided.

“His actions during combat were extraordinary, and his career stands as a shining example of all that we appreciate and honor in our veterans and those serving now,” Wise said then.

President Obama cited Kettles’ actions as the ultimate example of the U.S. Military motto never to leave a comrade behind, and also noted Kettles' humility in dismissing what he termed the “hub-bub” regarding his actions 50 years ago.

“You couldn’t make this up … It’s like a bad Rambo movie,” Obama said, marveling at the narrative of Kettles’ repeated selflessness and bravery in the face of withering enemy fire in what was known as “The Valley of Chumps” for the danger it posed to American soldiers.

"In a lot of ways, Chuck is America," Obama said. "To the dozens of American soldiers that he saved in Vietnam half a century ago, Chuck is the reason that they lived and came home and had children and grandchildren. Entire family trees – made possible by the actions of this one man."

Obama noted that a soldier who was there that day said Kettles became their John Wayne.

"With all due respect to John Wayne – he couldn't do what Chuck Kettles did," Obama said.

Kettles’ military career along with an in-depth chronicle of his actions that day are detailed in the Medal of Honor website.

Deep roots in Ypsilanti and at Eastern Michigan

Kettles was born in Ypsilanti Jan. 9, 1930, the son of a World War I Royal Air Force (Canadian) and World War II Air Transport Command (U.S. Army Air Corps) pilot, and thus had aviation in his blood.

While attending the Edison Institute High School in Dearborn, Michigan, he honed his love of flying on the Ford Motor Company Flight Department simulator. Following high school graduation, he enrolled in Michigan State Normal College (now Eastern Michigan University), where he studied engineering. Two years later, he was drafted to the Army at age 21.

Kettles served active duty tours in Korea, Japan and Thailand before returning in 1956 and establishing a Ford Dealership in Dewitt, Michigan, with his brother.

He answered the call to serve again in 1963, when the United States was engaged in the Vietnam War and needed pilots. Fixed-wing-qualified, Kettles volunteered for Active Duty and was assigned as a flight commander with the 176th Assault Helicopter Company, 14th Combat Aviation Battalion, and deployed to Vietnam from February through November 1967. His second tour of duty in Vietnam lasted from October 1969, through October 1970.

In 1970, Kettles went to Fort Sam Houston in San Antonio, where he served as an aviation team chief and readiness coordinator supporting the Army Reserve. He remained in San Antonio until his retirement from the Army in 1978.

Kettles then completed his bachelor’s degree at Our Lady of the Lake University, San Antonio, Texas, and then earned his master’s degree in commercial construction at EMU, where he went on to develop the Aviation Management Program in the College of Technology and taught as well.

He later worked for Chrysler Pentastar Aviation until his retirement in 1993.

Kettles resided in Ypsilanti with his wife, Ann, who survives him. See the link to the obituary for further details and funeral arrangements.