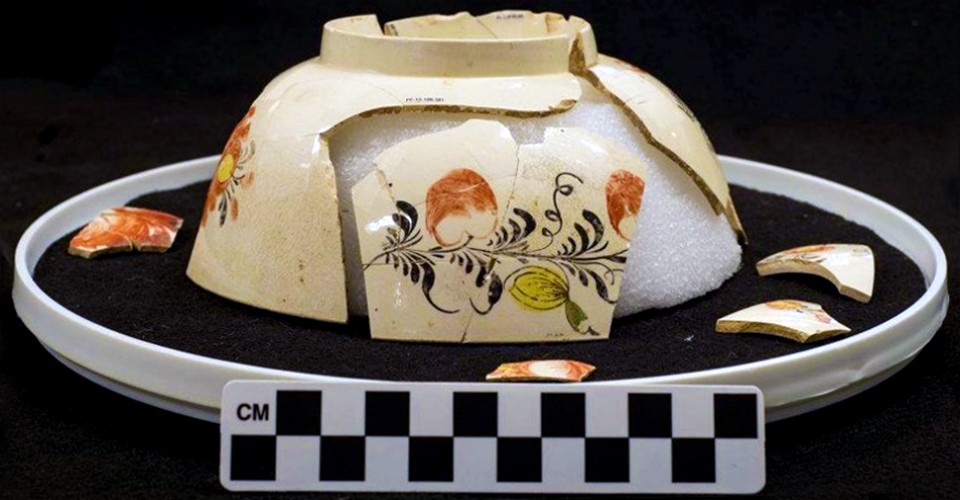 Researchers used a mass spectrometry technique to analyze glue used to repair a punch bowl once owned by Mary Washington.

YPSILANTI – Eastern Michigan University professor Ruth Ann Armitage is a scientist rooted in both the past and present.

Her work in archaeological chemistry applies modern analytical chemistry methods to historic and ancient materials to better understand human behavior in the past.

For instance, using a chemical analysis technique known as mass spectrometry, what can we learn from examining a punch bowl owned by George Washington’s mother?

Armitage’s work and that of several other scientists was featured in a press briefing and symposium last month at the annual meeting of the American Association for the Advancement of Science, held in Washington D.C.

Armitage, a professor of chemistry, explained how she is using a mass spectrometry technique called direct analysis in real time, or DART, to do instantaneous analysis of historically important objects.

In one case, she took a couple of wool fibers from a museum textile to find what type of red dye was used, information that influences the type of exhibit lighting that can be used without damaging it.

“To get results instantaneously is great,” Armitage said at the briefing. “We can answer questions quickly, which might be useful, depending on what your question is.”

Armitage also employed DART to analyze glue used to repair a small 18th century punch bowl Mary Washington had owned. She found the glue on that object was made from pine resin and beeswax. From this, historians could conclude that Washington had probably kept the bowl only for display purposes, viewed from a distance.

Armitage was among researchers invited to present in the "Mass Spectrometry: New Advances in Chemistry, Archeology and Paleontology" symposium at the annual association meeting.

Armitage and others demonstrated how analytical chemistry, applied to archaeology and paleontology, is increasing our understanding of evolution and ancient life.

Something as seemingly simple as knowing that a red dye came from a plant or an insect can help anthropologists, museum conservators and curators better understand ancient technologies and trade routes.

Analytical chemists use mass spectrometry to identify molecules based on their weight, or more precisely, their mass. The process uses a mass spectrometer, which is an apparatus for separating isotopes, molecules, and molecular fragments according to mass.

Thus, Armitage and her colleagues take the molecule and give it a charge (that is, make it an ion) and then in their time-of-flight mass spectrometer, give it a push and let it fly down a tube. Big molecules fly slower than small ones will, even with the same amount of push, so the time it takes to fly down the tube is proportional to mass.  So effectively a mass spectrometer lets you sort molecules based on how much they weigh.

“Mass spectrometry is a powerful tool for identifying organic molecules, with application in fields spanning from paleontology to the synthesis of life-saving drugs,” Armitage says.

There are many different approaches to mass spectrometry; Armitage and her research group use what are called “ambient ionization” methods – making charged molecules in the open air instead of inside a vacuum – to apply mass spectrometry to identify small molecules in archaeological and historic materials.

The approach is fast and requires little or no sample preparation, and therefore only tiny amounts of sample from precious artifacts.

Armitage has used DART-MS to confirm the presence of blood in accumulated residues on an African mask, to find indigo as a pigment on a painted sculpture and in ancient textiles from Peru, and to shed light on the composition of a prehistoric beer used by Wari elites in elaborate feasts. The Wari were a civilization that flourished in the south-central Andes and coastal area of modern-day Peru from about AD 500 to 1000.

“DART allows us to identify molecules that can give us insight into the past and its people – what they ate or drank, how they colored their clothing, and even why the mother of our nation’s first president might have tried to fix a broken bowl,” Armitage says.

For more on Armitage’s work, see the Armitage Group website.