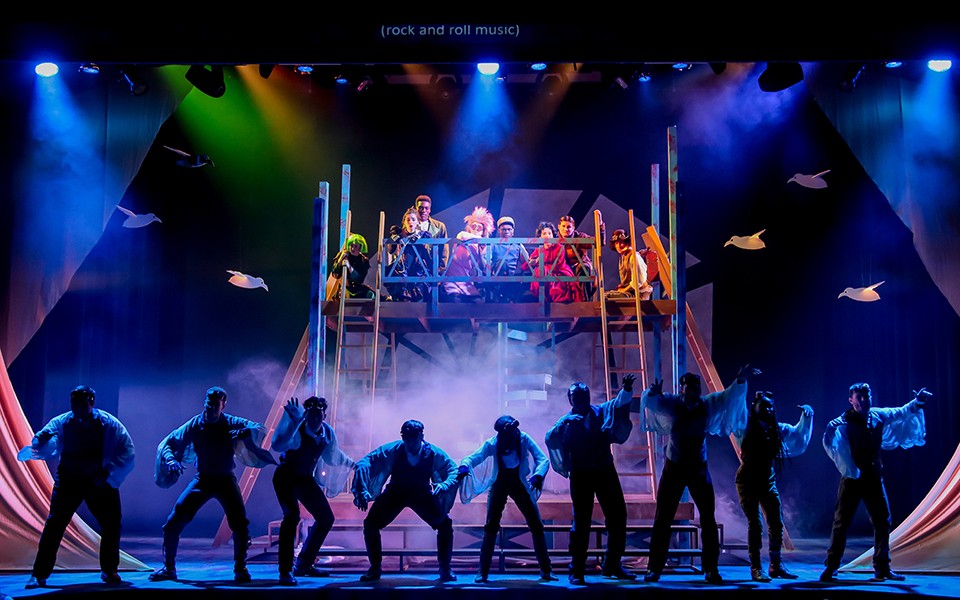 EMU Theatre’s presentation of "James and the Giant Peach" last December was historic, not necessarily because of the material or the production, but because of who was able to enjoy it. The availability of a range of access services at three of the nine performances made it possible for patrons with disabilities not only to appreciate the full experience but also feel welcome.

In other words, no one had to miss the show, as they may have missed many others in the past, due to vision, mobility, sensory or other challenges, and Elena SV Flys couldn’t be happier.

The first-year assistant professor of arts administration was the show’s accessibility director, and accessibility in the arts is both her passion and the field in which she’s already a rising star.

“We offered two accessible performances, one of them a school matinee, and one sensory friendly performance,” says Flys. “The accessible performances include access services such as American Sign Language, audio description, captions, tactile tours and programs in both large print and Braille. The sensory friendly performances are designed to create a safe and welcoming experience for guests who may include, but are not limited to, individuals on the autism spectrum, as well as people with sensory sensitivities.”

If you don’t think that matters much, Flys has news for you. As she wrote in her proposal for the Summer Research Award that supported her preparation for this project: “Each day, more and more people experience physical or sensory disabilities; moreover, an increasing number of seniors are experiencing similar limitations. In Washtenaw County, over 21,000 individuals report a disability, yet most of the leisure activities offered in our county do not include accessible tools for these audiences to fully enjoy the many cultural and artistic experiences available.”

There’s also a personal component to Flys’ mission. After earning her first degree (of five!), in theater, in her native Spain, she founded a theatrical company whose focus was raising awareness of environmental issues.

“One of our biggest grants was from the ministry of environmental sustainability to tour around country to very small villages,” Flys recalls. “My dad is a wheelchair user. He couldn’t access a lot of the theaters. I thought, ‘This is my biggest passion and I cannot share it with the people I love.’ I had thought about that a lot, but never before as a production manager.”

The light bulb that came on continues to illuminate. For example, she understood that it was crucial to the preparation of those December performances that an accessible design be included from the beginning of the process, rather than tacked on at the end, and that the artistic director be involved in it.

It was also important to communicate current thinking about disabilities. “For a long time, people have been using the medical disability model, that the person that has the disability has to do something to fit into society, versus the social model, that it is society that has to change to welcome everyone.”

One reason for Flys’ plethora of degrees was the difficulty she encountered in finding a good fit for her interests in the silos of academe. That seemed to be happening in her faculty career as well; she was coordinator of the arts administration program at Northern Arizona University when another light bulb flashed.

As Flys tells it, “I saw the position available here at Eastern and thought, ‘My gosh, this is my place.’ It has a school of communication, it has a theatre department, it has a bigger arts administration program. And it’s working out really well.”

The next EMU Theatre production to include accessible and sensory friendly performances will be Shakespeare’s "Much Ado about Nothing" in April. A “big, big event about disability, arts and culture” is planned for the fall, in collaboration with Ypsilanti’s Riverside Arts Center, says Flys. “We’ll have exhibitions and workshops and finish with a symposium at EMU.” The fall is also when she’ll teach her first class in accessibility in the arts at Eastern.

The Theatre Arts website notes Flys’ belief that “social issues … can be addressed through the arts, fostering community development.” While it’s certainly true that one benefit of her work will be a larger audience for the arts, she says that’s not what drives her: “For me, the first social change is to make sure that theatre is accessible for all. That’s why I do the work I do.”