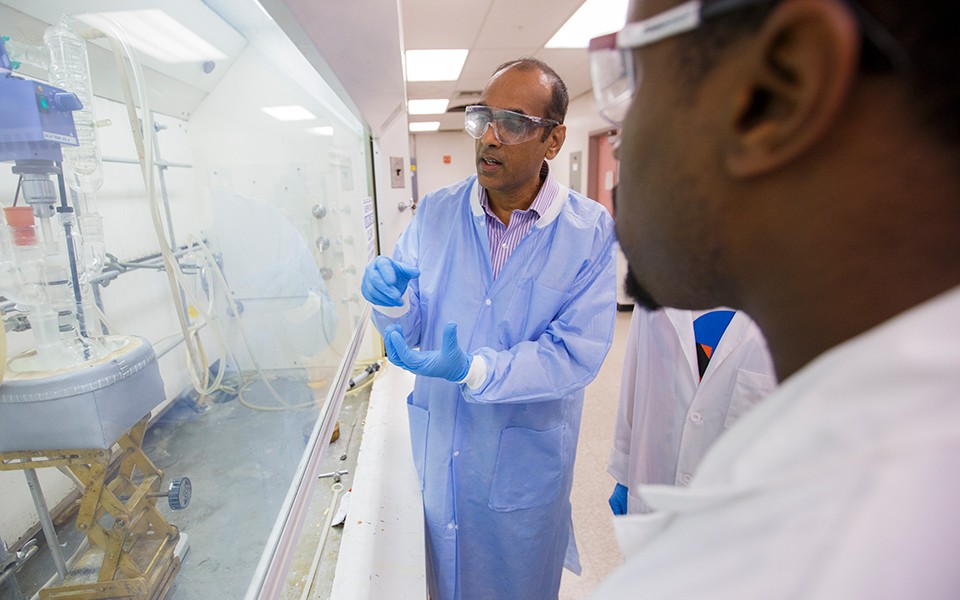 YPSILANTI – Vijay Mannari, a coatings professor in the School of Engineering Technology in the College of Technology at Eastern Michigan University, has received a United States patent for his work in the corrosion resistance of coatings.

The patent, issued on November 6, 2018, is the University’s 29th United States patent and is Mannari’s sixth with Eastern and the second in a series of related patents. The patent was announced at the regular meeting of the Eastern Michigan University Board of Regents on April 23, 2019.

US Patent No. 10,118,986 was awarded for Mannari’s work in developing corrosion-resistant polyepoxysilane coatings and the methods for preparing them. The coatings provide corrosion resistance for many substrate materials, including aluminum.

Mannari joined the Polymers and Coatings Program at Eastern in 2002, and has established a rigorous research program primarily focusing on environmentally friendly polymeric materials for development of advanced coatings. His work has included developing high-performance coatings for the U.S. Military.

In 2013, he was awarded the 2012 Ronald W. Collins Distinguished Faculty Award - Research II, one of Eastern’s highest academic honors.

“This patent is the latest example of Dr. Mannari’s exceptional work at Eastern,” said Mohamad Qatu, dean of the College of Technology. “It is a remarkable achievement, and serves to reinforce our reputation as a national leader in coatings and polymers research.”

The Coatings Research Institute at Eastern Michigan University was founded in 1985. The facility is widely recognized as a leading academic-based institute dedicated to the development of relevant scientific knowledge for understanding and expanding the science and technology of polymers, coatings, paints, inks, adhesives and related nano-based materials.

The United States Patent and Trademark Office is the federal agency for granting U.S. patents and registering trademarks.