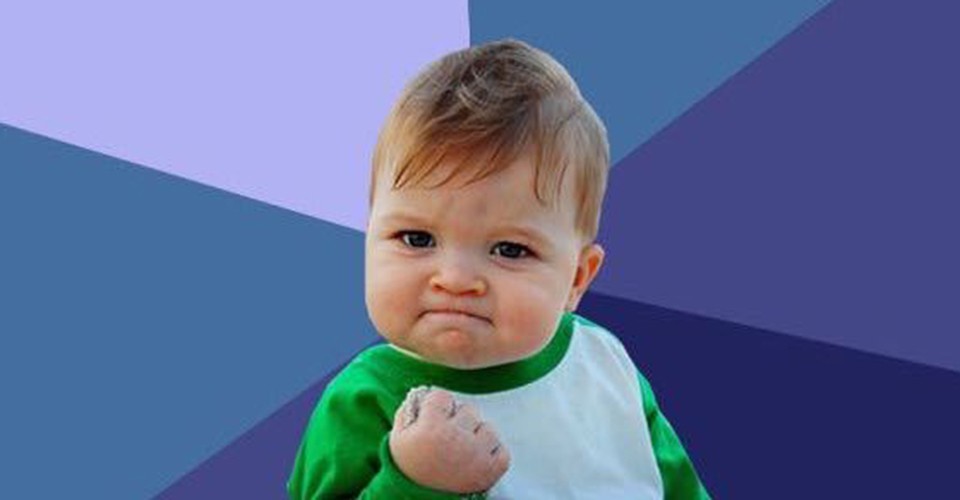 If you spend any time on social media, you’re likely familiar with memes. They typically appear as common, recognizable images with caption-like text. The more popular memes spread rapidly across various social platforms, but with different captions that tend to express a shared theme.

One common meme is “success kid”—an image of a baby clutching a fist and displaying a determined facial expression. The text often declares a trivial, humorous victory.

But memes can also have serious political themes. Those are the research focus of Jonathan Carter, EMU assistant professor of Communication, Media and Theatre Arts. His forthcoming book, tentatively titled “Political Memes,” will be one of the first full-length academic studies of how memes impact political discourse.

“Our political system increasingly relies on the expertise of individuals and systems to define certain situations,” Carter says. “For example, we’re told to trust the Defense Department and accept its declarations. But since memes are easy to create and invite group participation, people often use them to challenge those statements, thereby reopening political debate.”

“Old Economy Steve,” is a popular meme that has come to symbolize baby boomer privilege. “Steve,” who has a smirk and wears a wide-collared sports shirt reminiscent of the 1970s, accompanies text that shows an indifference to the economic problems of the younger generation:

“Steve memes began circulating at the end of the recent economic crisis and speak to the economic frustration of millennials,” Carter says. “In 2012, the government declared the recession was over, but millennials didn’t feel that was necessarily true. That group has used Steve to express their frustration with the political system.”

In more recent political developments, President Trump tweeted a meme in response to the publicly released version of the Mueller Report. The message declares “Game Over,” playing off the “Game of Thrones” TV series. The tweet resulted in many responses with altered text and images, some suggesting the report does not exonerate the president.

“The image in the president’s tweet doesn’t do much to support the text, but it is connected to a pop culture moment,” Carter says. “The negative reactions illustrate a refusal to take messages at face value. They’re examples of how memes invite open discourse.”

Memes can also take on a life of their own, as with “Pepe the Frog,” a character cartoonist Matt Furie created in 2005 solely for his online comic book series.

“People have used Pepe memes in myriad ways, including shocking viewers with ‘gross out’ humor,” Carter says. “During the 2016 Presidential race, Pepe began appearing in dark areas of the web and he became a hate symbol for the alt-right. Furie didn’t like what was happening with his creation, so he killed off the character. Despite Furie’s actions, the Internet keeps Pepe alive. It’s an interesting case study of who controls memes.”

As we enter the upcoming 2020 Presidential race, memes will continue to give a voice to groups who want to express their political views. Carter wonders if that freedom of expression comes at a cost.

“Anyone can create a political meme to start a conversation,” he says. “But if we turn politics into simplified messages, do we lose some of the nuance?

“Memes have radically beneficial and dangerous elements. I tend to lean toward slight optimism. As long as we have these modes of communication, it prevents one message from having total dominance.”