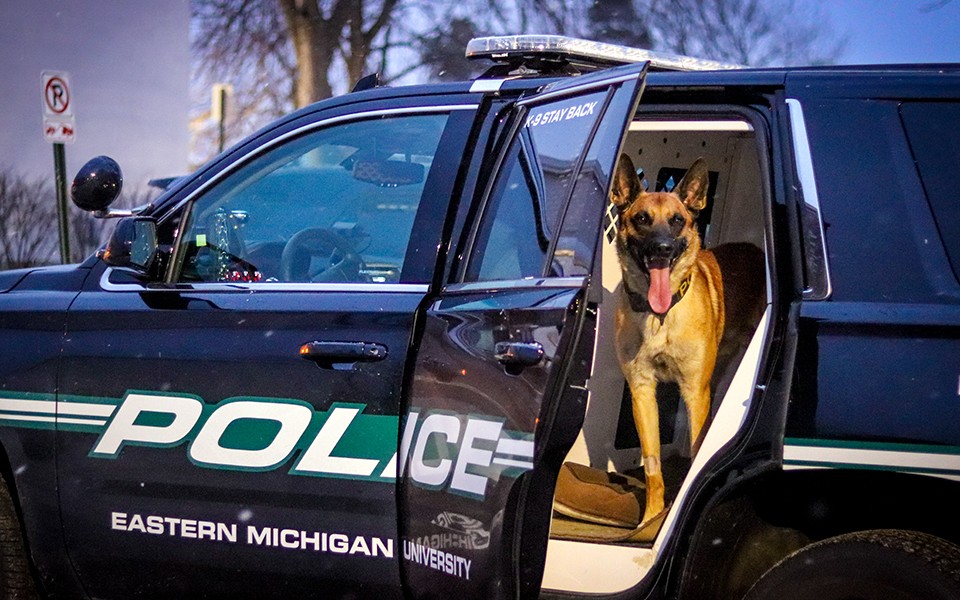 YPSILANTI – Nitro, Eastern Michigan University’s first canine officer and an expert in explosives detection and patrol, has been invited to represent the state of Michigan and Ontario in a national competition of police dogs around the country.

Nitro and his partner, EMU police officer Bridget Bofysil, are part of Region 19 for the Unites States Police Canine Association’s National Detector Dog Trials and Certification event. The region includes agencies from all around Michigan and Ontario.

The two were to represent the area in explosives detection in the national event, held this month in Albany, NY. Nitro, who just turned five, has been working at Eastern Michigan for three and a half years.

Nitro is a Belgian Malinois. He received his initial explosives detection training at the Mid-Michigan Kennels in Eaton Rapids, Mich., and has gained a reputation around Eastern and Washtenaw County as a top-flight asset in helping with a wide variety of patrols and assists. He is just one of three police dogs in Washtenaw County that specialize in explosives.

Nitro is tan colored, with a black mask. Malinois are a working breed, used by local, state and federal law enforcement agencies due to their intelligence, high level of energy, and strong need to work.

Nitro is trained by Bofysil, an army veteran who served in Iraq and Afghanistan, working extensively with dogs during her stint in the Afghan campaign.

Bofysil, a Lansing native, started working at Eastern in March of 2014. Before that, she earned a degree in criminal justice from Lansing Community College and graduated from the Mid-Michigan Police Academy.

Bofysil and Nitro, whom she had already begun training, came as a package deal as she was applying for jobs. She sat down with Chief of Police Robert Heighes and made a proposal to establish a canine program at Eastern Michigan.

Bofysil says she enjoys working at the University, in part because of the diverse range of things she and Nitro do in terms of on-campus and off-campus patrols, plus the chance to interact with Eastern’s students. Nitro, whom Bofysil donated to the University, lives with her.

Nitro is extremely loyal to his trainer and highly attentive to his trainer’s commands, traits that quickly become obvious as you watch him searching for various items on campus.

“He’s very protective of the people that he loves,” Bofysil says. “He’s extremely energetic and serious about his work, but also very social. And he has a very good on-off switch. He’ll lay down when I’m writing reports in the office, or relaxing at home.”