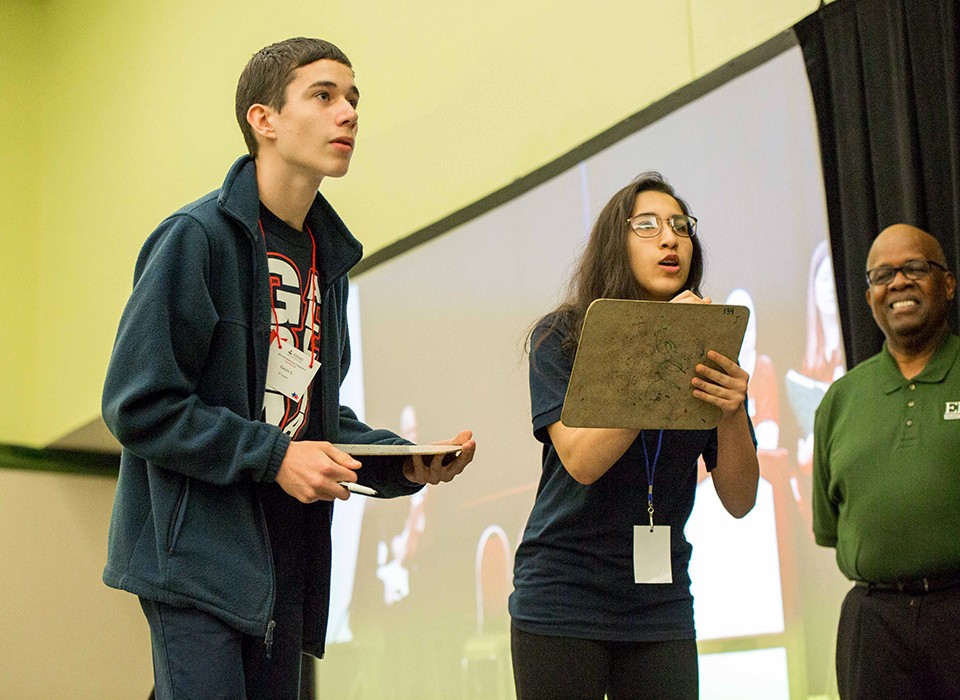 YPSILANTI – “Is everybody going to have fun today?”

The answer from more than 200 area elementary and middle school students was a rousing affirmative, as Malverne Winborne, director of the Eastern Michigan University Charter Schools Office, kicked off the sixth annual Math Facts Challenge in the EMU Student Center on Wednesday, May 29.

Winborne then noted the number one rule of the day: Have fun.

“We love having you here,” echoed Mike Sayler, dean of the EMU College of Education, who joined in welcoming the students. “We hope the experience of getting ready (for the competition) was exciting for you. It’s exciting for us to have you here, too.  Some of you are probably a little nervous, but you’re going to do great!”

“Everybody in this room is (already) a winner!’ said Stacey Good, a teacher at the Pace Academy and the program coordinator for the Math Facts Challenge.

Students in grades 1-8 went head-to-head in a series of grade-level appropriate tasks, ranging from addition to multi-step equations, advancing a step closer to the finish line in each individual competition by giving a first response with the correct answer.

It was a day of high fives, good sportsmanship and encouragement as students solved a wide variety of equations, such as what is x in 2x + 4 = 3x – 4? Answer: 8.

The challenge, which is sponsored by the EMU Charter Schools Office, ran 9 a.m. to 2 p.m. in the EMU Student Center.

Among the competitors was Hassam Al-Tameemi, a seventh grader at Central Academy who’s interested in studying neurobiology. “This is my first year in this competition,” he said. “I had a lot of fun, and am eager to return next year.”

Dayvian Richardson, a student from Pace Academy, reveled in the competition and the chance to win a medal. “It was more than exciting,” he said.

The challenge originated at PACE Academy, an EMU charter school, under the tutelage of Good, who teaches there. After several years as a school-wide event, the competition expanded in 2014 to include other schools, and later moved to Eastern Michigan University, where it has continued to flourish.

After the team winners were announced and pictures taken, Winborne had some final words for the students.

“Did you have fun?” he asked, sounding the day’s theme.