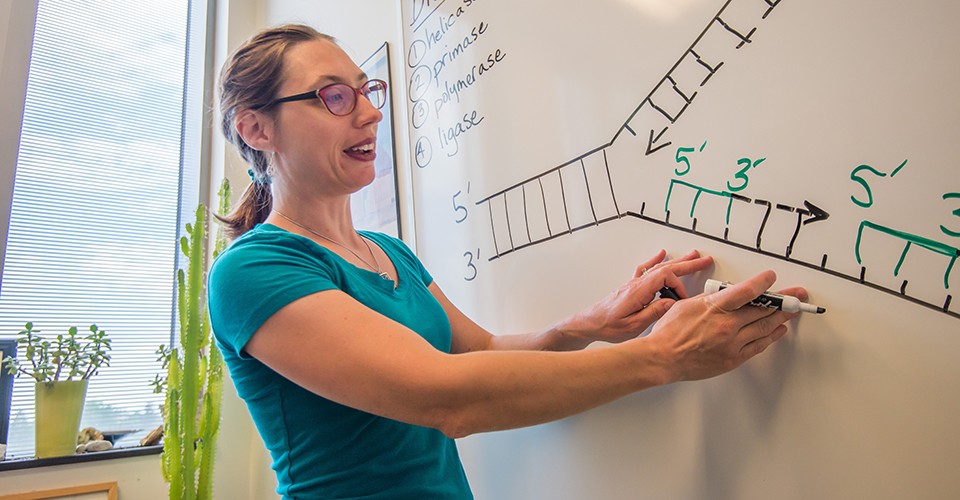 YPSILANTI – It’s one of professor Anne Casper’s favorite academic scenes – students in the Mark Jefferson Science Complex Building staring intently into their smartphones in the days prior to one of her Introduction to Biology (BIO 110) class sessions.

No, they’re not building their social network, texting or checking Twitter. The students are viewing a 15-minute, pre-class lesson video, a crucial part of a curriculum Casper designed that has significantly improved the success rate in her class, particularly among disadvantaged students.

The results are documented in an article entitled, “True Grit: Passion and Persistence make an innovative course design work” in the latest edition of PLOS Biology, a leading national journal that publishes articles of high significance in the field of biology.

The piece notes how, after two unsuccessful tries, Casper adapted a highly structured course model that improved performance across the board and reduced the achievement gap that can affect certain students under a traditional lecture format.

“Faculty who have the grit to experiment and persevere in making evidence-driven changes to their teaching can reduce the inequalities induced by economic and educational disadvantage,” Casper says in her paper.

Such success didn’t come automatically when Casper set out to improve academic outcomes in 2012. That year, she cold emailed Scott Freeman, a professor at the University of Washington who had experienced strong gains in his introductory biology classes through retooling his teaching methods.

Freeman, who along with colleague Sarah Eddy co-authored the PLOS piece, was more than glad to help, and Casper soon visited his classes to get a first-hand look at how such an approach can succeed.

But it didn’t initially for Casper, who implemented several changes that yielded no improvement, such as substituting a weekly homework assignment of 30 questions with an online practice exam or having students do a high level of pre-class reading and question answering.

In her third try, Casper hit upon the videos, each of which takes about four hours to prepare.

“With the videos, I’m saying, ‘Give me 15 minutes of your life before you get to class,’” Casper says. In that time, the students also get 15 questions related to the video, of which just two will be posed in a short, three-minute quiz that begins each class.

In detailing the success of her third try, Casper notes a key distinction – that in today’s learning environment, many students enjoy and process the video information more deeply than reading from the textbook.

“The passing rate of students in the third semester was 20 percentage points higher than past semesters,” Casper says. “Many more students now have the opportunity to continue their studies in biology.”

Casper is also noted for her research on genetic change in cancer cells, for which she’s received several major federal grants, and for her work in the lab with her student assistants, whom she calls “labbies.”

Casper says she loves working at Eastern Michigan, which offers the opportunity to blend teaching and connecting with students in her research.

“It’s exactly the kind of job I wanted,” Casper says. “I really wanted teaching to be a major part of my work along with research, and Eastern offers the ideal split.”