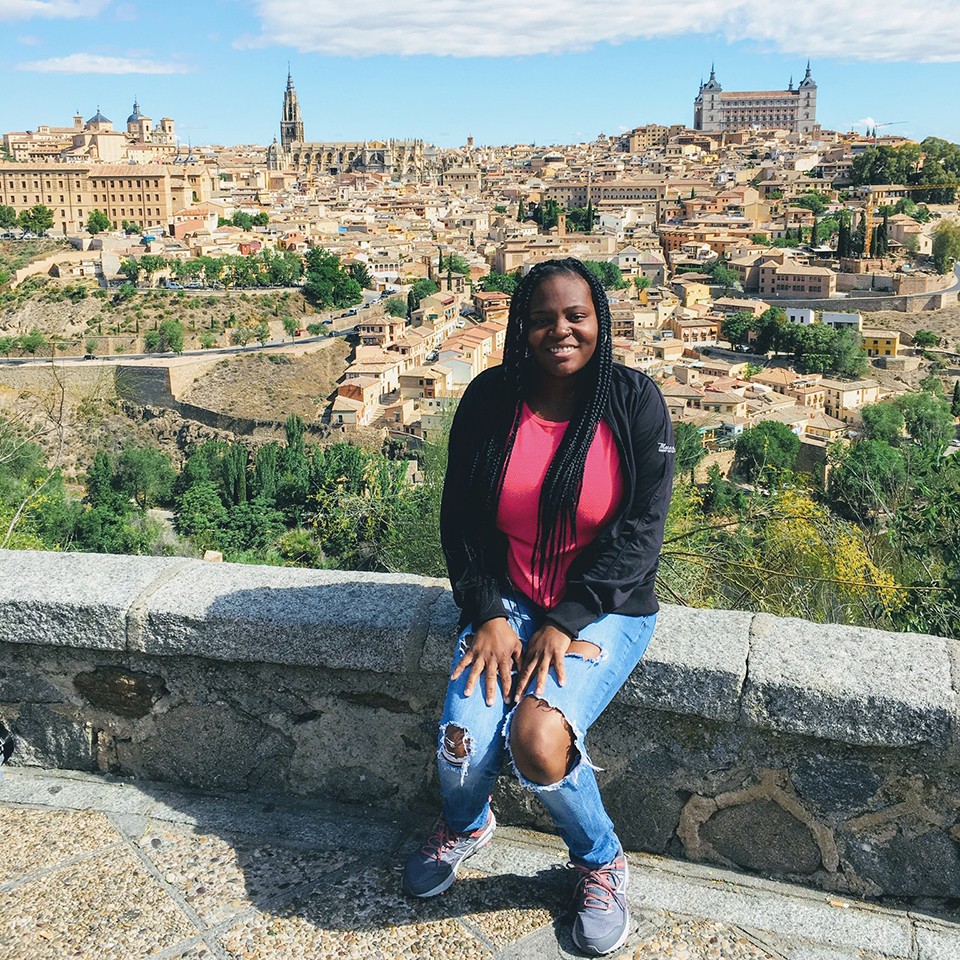 YPSILANTI – Alaya Hicks describes herself as somewhat shy, and one of her Spanish professors, Alfonso Illingworth-Rico, would agree.

But that changed during a trip to Spain this summer, as Hicks participated in Eastern Michigan University’s intensive Spanish Study Abroad Program. The program offered a vivid experience that pulled Hicks out of her comfort zone while providing a rich sense of a foreign country’s language, culture and perspective.

The program ran from May through June, a month and a half in Avila, Spain. Hicks, who earned a prestigious Benjamin Gilman National scholarship from the State Department to help pay for the program, stayed with a host family and attended classes at the University of Salamanca.

Hicks, a senior nursing major with a minor in Spanish, is excited to now use her expertise in helping patients, noting it’s the second most spoken native language in the world.

“I wanted to take on that boundary,” Hicks says. “Languages are expanding in the world and play a part in our everyday culture. Also, many jobs are looking for people with bilingual skills. It helps you see the world in another way. There are a lot of Hispanics in our country, and you come across many patients who don’t speak English. I just want to be there to help.”

Hicks credits Illingworth-Rico with preparing her for the intensive experience, and says she flourished in staying with her host family.

“The most special experience of my study abroad time was meeting my host family for the first time,” she said. “They made me feel welcome into their home and helped me become comfortable with my stay.”

Hicks says her host mother didn’t speak any English and her daughter spoke a small amount.

“She spoke English when I couldn’t understand what her mother was trying to tell me,” Hicks says of the daughter. “But I participated with my host family when they had festivals and celebrations and family traditions.”

Illingworth-Rico said Hicks showed tenacity in earning the federal Gilman Scholarship, which has an extensive application process. And then she flourished in Spain.

“Alaya is rather shy,” he said. “That changed radically while she was in Spain. At the intermediate level, it can be hard to talk to people in other countries. She was doing that, and going out and taking tons of pictures.  She did really well and benefitted greatly from this experience.”

The program included myriad cultural immersions, sights and experiences. The schedule included trips to museums, monasteries and historic and beautiful cities such as Salamanca, Toledo and Segovia as the students filled their weekends with activities.

Now, Hicks is excited about the kind of example and inspiration her experience might offer other students who face challenges in getting their education.

“As an African American woman and also the first person in my family to go to college and to study abroad in another country, I hope that I can encourage and teach students that they are worthy of anything and have more potential to succeed in following their dreams; that the sky’s the limit and to never be afraid to challenge themselves,” Hicks said.

For Hicks, who has worked as an orientation leader and is in the Spanish Club, Eastern has proven the ideal environment in which to grow socially and intellectually.

“Before I came here, I was very insecure,” she said. “College told me that many people accept you for who you are. We all make mistakes. I’ve learned to take things one step at a time, and I know that (one) step could change your life.”

Note: Eastern will hold Study Abroad Fair on Oct. 1 from 10 a.m. to 4 p.m. in the Student Center Ballroom. Students can learn about all upcoming faculty-led and semester/ year programs, and meet past students, and faculty. In addition, there will be a drawing for $500 towards a Study Abroad program through EMU.