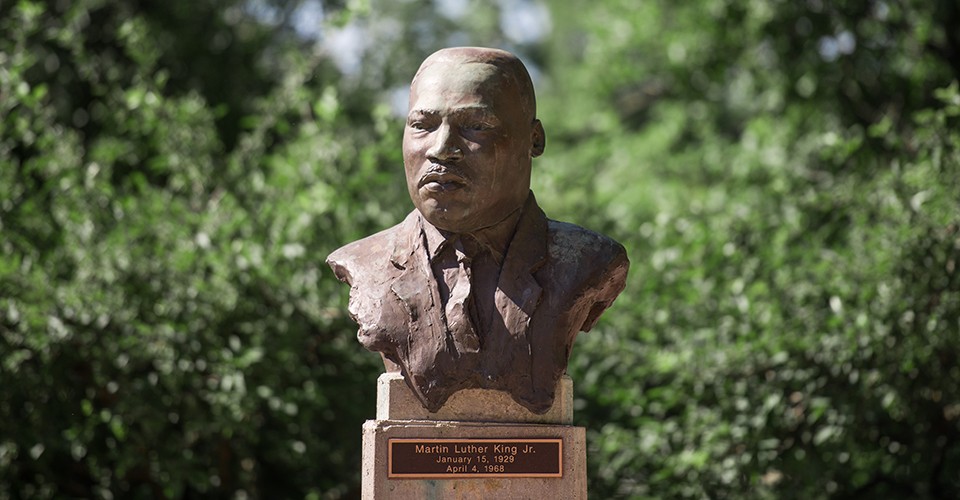 YPSILANTI – Terrence J. Roberts, one of the Little Rock Nine who desegregated Central High School in Little Rock, Arkansas in 1957, following the decision by the U.S. Supreme Court in the Brown v. Board of Education case to integrate schools, will serve as keynote speaker for Eastern Michigan University’s annual Martin Luther King, Jr. celebration on January 20, 2020.

As a 15-year-old eleventh grader, Roberts joined eight other students who were chosen after an intensive selection process and became one of the first nine black students to attend a formerly segregated large public high school in Little Rock, Arkansas.

In his presentation, Roberts plans to touch on Lessons From Little Rock.” He notes that “there remain salient lessons from Little Rock, 1957, that inform our decision-making in the year 2019.”

“We continue to be confused by the construct of race; our concept of community is embryonic, the primary tasks of culture elude us, and our spiritual compass seems to be in great need of calibration,” he says. “Public schools are being re-segregated and private, uniracial schools are cluttering the horizon. The lessons from Little Rock can lead us to greater understanding and awareness about how to resolve these issues.”

“Our 2020 MLK Celebration theme, “Rise Up Against Injustice”, provides an appropriate backdrop for our keynote speaker,” said MLK Celebration co-chair Ellen Gold, assistant vice president and dean of students at Eastern. “So often we read about or listen to someone speak about MLK’s work and legacy without that person ever having experienced the historical lessons of segregation during Dr. King’s lifetime.

“This year we chose to bring history to life. Terrence Roberts has and continues to live the legacy of fighting injustice, and we are excited to welcome him to Eastern Michigan University.”

Roberts graduated from California State University, Los Angeles with a B.A. degree in sociology, and then received his M.A. degree in social welfare from UCLA School of Social Welfare.  Roberts obtained his Ph.D. in psychology from Southern Illinois University, Carbondale.

He was a member of the faculty at Pacific Union College and then served as the director of mental health services at St. Helena Hospital and Health Center. From there he became a professor and department chair of Antioch University Los Angeles’ psychology program. He was hired by the Little Rock School District as its official desegregation consultant; to this day he provides similar services throughout the United States.

In 1999, President Clinton awarded Roberts, along with other members of the Little Rock Nine, the Congressional Gold Medal, the country’s highest award for civilian contributions to society.

In 2009, Roberts published his memoir, “Lessons from Little Rock”. The following year, he published a second book, “Simple Not Easy: Reflections on Community Social Responsibility and Tolerance”.  These works are as relevant today as they were when he authored them.

Currently, Roberts is CEO of Terrence Roberts Consulting, a management consulting firm devoted to fair and equitable practices in business and industry.  A much sought after speaker and presenter, Roberts lectures and presents workshops and seminars on a wide variety of topics.

The year 2020 marks the 52nd anniversary of King’s assassination, which occurred on April 4, 1968. Subsequently, on November 3, 1983 President Ronald Reagan signed a bill establishing the third Monday of every January as the Martin Luther King Jr. National Holiday, to begin in 1986.  On January 20, 1986, the United States celebrated the first national observance of the King Holiday, which also marked the first annual MLK celebration by Eastern Michigan.

Roberts will speak briefly at the 34th annual MLK President’s Luncheon at Eastern, an event widely attended by community leaders and EMU students, faculty and staff to honor the life and legacy of Martin Luther King, Jr. Following the luncheon, he will deliver the MLK keynote address.

EMU’s MLK celebration – one of the most extensive in Michigan – will take place from January 17-22, 2020 with a variety of events occurring over the week, including the second annual Gospelfest. Nominations for the annual MLK student and community humanitarian awards will be sought later this fall.