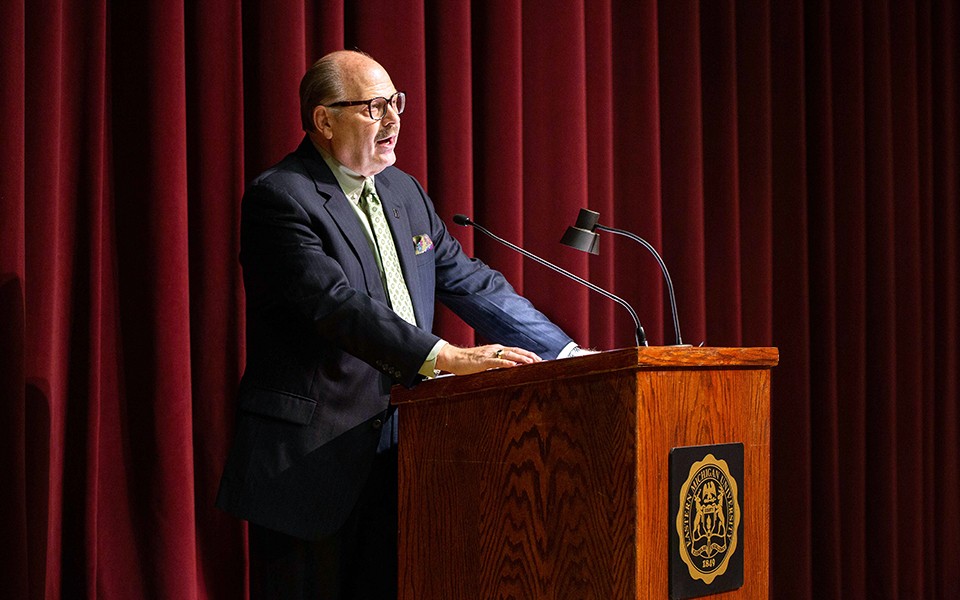 President Smith delivered his second annual State of the University Address on Oct. 15, 2019 at the Student Center Auditorium.

Smith outlined the University Strategic Investment Fund, and an initial commitment of $250,000 to support new campus initiatives, at his second annual State of the University Address at the EMU Student Center.

The President spoke to students, faculty and staff in the center’s auditorium in an address that was live streamed.

“Requests to access these funds will come through the annual budget process, and we will ask for feedback from campus as we refine the criteria and process for this exciting new initiative,” President Smith said.

In his remarks, President Smith noted the success of recent budget stabilization efforts. He highlighted a turnaround plan that he acknowledged had been painful for many, but that has successfully turned seven consecutive years of operating deficits from fiscal year 2011 through 2017, totaling $60 million, to two years of balanced operating returns in fiscal years 2018 and 2019.

He outlined three institutional priorities for the coming year, noting the progress Eastern has already made in each area. Those priorities are:

President Smith noted that six-year graduation rates increased significantly this year for a variety of student populations at Eastern. These include students who receive the Educational First Opportunity Scholarship, commonly known as “EFOS,” student-athletes, whose cumulative GPA was an all-time University best of 3.27, and other populations.

Distinctive programs Eastern has implemented in the last year that support student success include the Eagle Engage Corps, which combines debt forgiveness and public service in tandem with community programs to re-engage students who have left EMU or are considering leaving as a result of financial challenges. “We’ll have our first graduate from the program this coming December,” Smith said.

President Smith called for further development of online programs, citing programs added this past year, including an online master’s degree in Curriculum, a master’s in Early Childhood Education and a master’s in Special Education, along with a master of science in Cyber Defense.

“Graduate students in particular demand online programs because they don’t want to quit their jobs to attend school, and their employers will often pay for the degree – as long as they keep working,” President Smith said.

President Smith noted Eastern’s myriad efforts in terms of community support, singling out the “Collaboration for Change,” a partnership Eastern launched this past summer with Ypsilanti Community Schools and Washtenaw County that seeks to promote student success in the community.

“The partnership was launched with the goal of creating new initiatives and of fortifying existing ones, such as our Bright Futures after school program and Pathways for Future Educators, which supports high school students in their goal to become teachers,” President Smith said.

In terms of safety, Eastern’s police force now patrols a considerable area around campus as the University works to support Ypsilanti and county law enforcement, President Smith said, noting that EMU’s officers are fully sworn in the city of Ypsilanti and deputized in Washtenaw County.

“And we now have more than 900 cameras on campus, helping ensure Eastern is even more safe for visitors as well as our own students and employees,” he added.

In addition, visitors can see vivid evidence of Eastern’s community engagement at the northwest end of campus, where the IHA Health Center @ EMU is set to open on Nov. 4, President Smith noted.

The center, a collaboration with IHA and the Saint Joseph Mercy Health System, will provide primary health care services to students, faculty and staff, as well as to members of the community at-large. The public is invited to the center’s community open house, to be held from 10 a.m. to noon on Saturday, Nov. 2.

President Smith also touched on enrollment, noting that it has been falling at universities across the Midwest and in Michigan, and that Eastern is not immune to that trend.

“We know that, despite those trends, and the growing demand for online opportunities, ground-based enrollment remains crucial to our future,” President Smith said. “We are working diligently on several fronts in seeking students from near and far.”

The address also noted Eastern’s diversity and welcoming nature, along with a focus on its faculty.

“Our faculty are deeply engaged with our students in a way that sets us apart in public higher education,” President Smith said. “Ask students about their most cherished memories of Eastern, and they will – time and again – cite experiences with faculty.”

He also thanked the University’s bargaining units. “Strong labor-management relations were key to the success of this turnaround plan, and I am grateful for their valuable partnership.”

The President sounded an optimistic note, noting the tough steps the University has recently taken to align its budget, resources and strategic investments with the needs of today’s students.

“I want to emphasize the sense of community we have on our campus,” he said in concluding his address. “It truly does exist. Through good times and bad. We possess a singular ability to work together, the potential to realize our vison and further implement the plans I’ve laid out today.”

The full text of the speech can be found at the Presidential address link.

A video of the speech is also available.