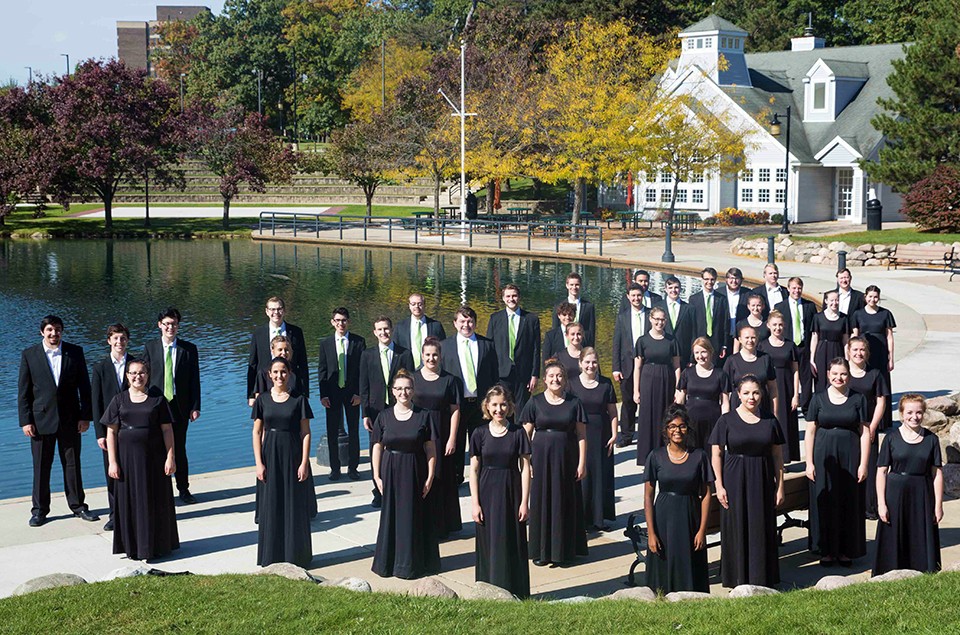 The golden voices of the Eastern Michigan University Choir, the most prestigious vocal ensemble on campus, aren’t just inspiring audiences in Pease Auditorium—they’re bringing joy to listeners and choral aficionados around the globe.

Among the choir’s recent notable appearances are a National Honor Choir performance at Carnegie Hall in 2018 and a two-week European tour last spring. The tour culminated with a signature concert at the Universitas Cantat, an international choral festival held in Poznan, Poland. Festival organizers invited the EMU Choir to give the final performance of the multi-day event.

“Our hard working, dedicated and talented students perform at the highest level of anyplace in the country,” says Brandon Johnson, associate professor of music and director of choral activities. “They commit a lot of time and energy to the choir, and it shows in the wonderful opportunities and experiences they’ve had.”

The ensemble is comprised of 42 students, split roughly between male (tenor and bass) and female (alto and soprano) choristers. Although most members are undergraduate students studying music, the choir is open to all EMU students by audition.

“Most members are serious connoisseurs of music,” Johnson says. “They devote six hours per week to rehearsal. You have to be more than a hobbyist for the sheer amount of time dedicated.”

With each performance, the ensemble covers an array of engaging and sometimes exotic compositions to meet the tastes of contemporary audiences.

“We offer different sounds, from Korean folk music and 20th-century avant-garde to spirituals and American folk music,” Johnson says. “We continually craft our performances to make them more artful and beautiful. We want audiences to be overcome with excitement, energy and emotion.”

Critical listeners and professionals are also taking notice of EMU’s elite ensemble. In 2018, the group was one of just four university and college mixed choirs from 10 states invited to perform at the Central and North Central American Choral Directors Association Regional Conference in Chicago.

When renowned Italian operatic star Andrea Bocelli performed with the Detroit Symphony Orchestra before an audience of about 30,000 at Little Caesar’s Arena Detroit in December 2017, he invited the EMU choir to accompany him. At the Universitas Cantat festival last spring, members of the choir performed with Bocelli once again.

“Performing at such prestigious events validates the students’ hard work and commitment,” Johnson says. “Music can take you anywhere and offer life-altering experiences. We want to open those doors to our students.”

Besides rehearsing, maintaining a busy concert schedule and recording (a new release, “Lux Aeterna” will be available in December), the EMU Choir is committed to community outreach.

“We’ve supported many local high school music education programs,” Johnson says. “We’ve also performed with all the major community-based choral ensembles across Michigan, working with people of all ages and abilities. Next April, we’ll launch a four-day residency on the EMU campus with Morten Lauridsen, who is perhaps the most important choral composer of our generation. During the residency, we’ll work with hundreds of choral performers from across the country. We’re delighted to have these opportunities to connect with the community.”

Future choir plans include a holiday concert December 14 at Pease Auditorium and December 15 at Orchestra Hall in Detroit—their first performance in memory at that venue. Next February, the choir will embark on its first west coast concert tour, with performances in California, Idaho, Utah and Nevada.

But you needn’t travel far to check out this choice group of choristers. You can catch them on campus and in multiple performances throughout metro Detroit and surrounding communities.

Visit the EMU Choir website to learn more about the ensemble and their repertoire, view video clips and access a schedule of upcoming performances.