Who is Mark Jefferson, and why is a major Eastern Michigan University academic building named after him? A two-day conference at EMU offers vivid answers 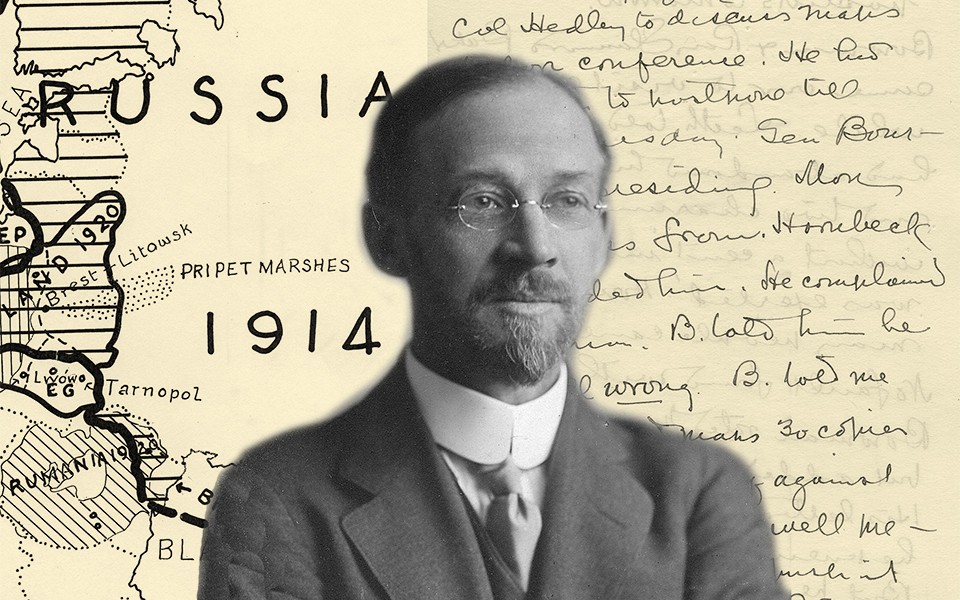 YPSILANTI – The big building called “Mark Jefferson” sits imposingly at the western end of the Eastern Michigan University campus. It’s part of the Science Complex, a facility that puts EMU in the forefront of STEM education in Michigan.

But what’s the story behind the “Mark Jefferson” name. Who was he, and what did he do to merit naming such a significant building after him?

A great deal, it turns out. That became abundantly clear during a two-day conference at Eastern Oct. 17-18 that examined Jefferson’s legacy. A variety of seminars and discussions delved into his fascinating history.

The event marked the 100th anniversary of the Versailles Peace Conference – the meeting of world leaders that established a new international order after World War I. In 1919, presidents, diplomats, and state leaders gathered in Paris to redraw national boundaries, negotiate settlements, and work toward peace in a time of global upheaval.

The person responsible for drawing the maps used by delegates in their negotiations was Eastern Michigan University Geography Professor Mark Jefferson, who lived from 1863-1949.

Jefferson was a pioneer in the discipline of geography. A native of Massachusetts, he studied at Boston University and Harvard, earning degrees in astronomy and geography.

In 1901, Jefferson was hired to chair the geography department at Michigan State Normal College (now EMU), where he taught until 1939. Scholars consider Jefferson to be one of the most accomplished geographers of his era, and he received the Cullum Geographical Medal from the American Geographical Society.

Among the EMU conference speakers who offered insights into this remarkable history were Wesley Reisser, a Senior Officer in the State Department who also teaches geography at George Washington University; and recent EMU alumnus Dustin Elliott, who conducted research with the Jefferson papers at the EMU Archives for his senior seminar paper in history professor Mary-Elizabeth Murphy’s class.

Elliott noted that Jefferson was fluent in six languages and traveled to Argentina in the 1880s, where he served as an assistant astronomer at the National Observatory in Cordoba.

“Mark Jefferson was one of the more fascinating individuals that I have had the pleasure of learning about …” Elliott told a rapt crowd in the Strong Hall Auditorium. “Pinpointing Jefferson’s experiences around the world was vital in order to observe more deeply his appointment to the commission and his importance at the (Versailles) conference.”

• “In 1883, 20-year-old Mark Jefferson embarked upon his first voyage to South America with only three years of college under his belt and an incomplete undergraduate degree. He spent the next three years in Cordoba working in the observatory, where he obtained crucial cultural experience that would help to focus the trajectory of his career. He immersed himself in Cordoban society and joined the Cordoban Foreigners Club.”

• “Jefferson described this club as being, ‘eighty members strong ... where men from forty different countries were constantly engrossed in their mutual awareness and appreciation of difference.’”

• “Due to Jefferson's time spent in the Foreigners Club as well as the diverse culture around him, he honed certain skills that would prove to be great assets. Between the years 1880 and 1890, Europe was disgorging annually 100,000 emigrants into the Argentine. This transformed the Cordoban area into what some have called a language laboratory."

• “Because of this atmosphere, Jefferson’s linguistic skills improved dramatically, which would greatly benefit him in the future. Before Jefferson left the United States for Argentina, he had already acquired a working knowledge of Latin, Greek, German, French, Italian, and Spanish during his time at Boston University. But it was in Argentina where his mastery of language really took form.”

• “Jefferson was very open about his desires to travel and see the world. In light of this interest, it made sense that he would seek out a career that would facilitate achieving this goal.”

Elliott said it was a joy to be able to utilize the Mark Jefferson papers in such an instrumental way in order to conduct his research.

“The experience I had working with them in the archives here at Eastern will certainly inform the way I conduct research, analyze, and read historical documents moving forward,” he concluded. “I strongly encourage any students to utilize this excellent resource whenever possible.”

Wesley Reisser on Jefferson’s efforts in the WWI Peace Talks

Reisser noted the exceptional degree to which the maps of Jefferson, the chief cartographer at the conference, shaped how the world looks today, particularly Western Europe. Among his other observations:

• Jefferson’s ability to draw such maps, with minimal source material in some cases, is astonishing.

• Wilson’s remarkable statement to Jefferson and other cartographers en route to Paris: “Tell me what’s right and I’ll fight for it.”

• The maps drawn served more strategic interests than they did language or culture dispersion, often drawing borders on strategic areas such as mountain ranges that could be readily defended.

• The chief document outlining the American plan for Europe was an 8 x 11-inch binder called “The Black Book,” and was brought to all negotiations. The “Red Book,” accounting for the rest of the world, was not widely used.

• Lenin and the ruling Bolsheviks were not recognized in the maps.

• The maps expanded Italy’s frontiers and broke up Austria-Hungary while creating more than 3,000 miles of new borders.

• The U.S. came extremely prepared to the talks, ready to discuss matters scientifically and authoritatively. That approach was not widely reciprocated.

• In a variety of ways, particularly as regards Poland, WWII became an extension of World War I.

• Jefferson was 56 years old when he served as chief cartographer. He spent six months in Paris, but remained far removed from the politicking, working mostly alone or with his team of assistants in producing a prodigious number of maps.

“It was an excruciating experience, to put it mildly,” Reisser said.