A Veteran's Story: Eastern Michigan University social work major rebuilds his life, thanks in part to campus services for veterans 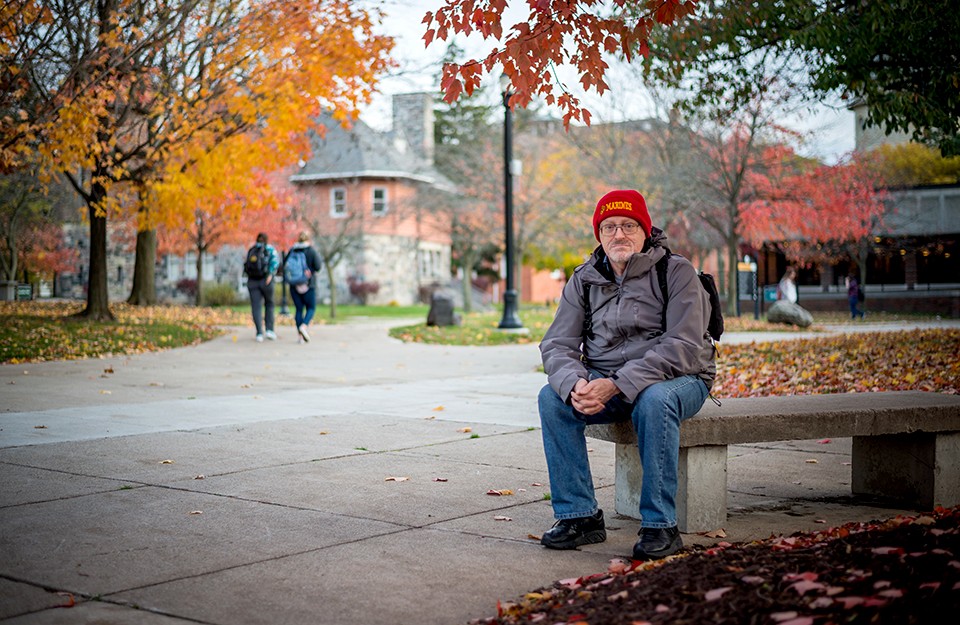 Four years ago, John Wilkerson thought he had no future.

He’d been suffering from crippling depression, anxiety and ADHD. The undertreated disorders turned his world upside down: his marriage crumbled, he lost his job and he became homeless.

Wilkerson lived with friends and in shelters. With no job or permanent residence for several years, he saw no light from what seemed to be the bottom of a deep well.

Today, light has returned to Wilkerson’s life, thanks to help from the U.S. Department of Veterans Affairs (VA) and EMU’s Lt. Col. Charles S. Kettles Military and Veteran Services Resource Center. Wilkerson is on track to receiving a bachelor’s degree in Social Work from Eastern. The former U.S. Marine is also helping people overcome similar obstacles he faced.

“Eastern has given me a fresh start and a new career,” says Wilkerson, 58. “It’s been the right place for me, with a perfect size, great education and terrific resources.”

Wilkerson enlisted in the Marines after graduating high school in 1979. He earned a Sergeant ranking while working in imagery intelligence during his eight years of service. After his discharge, he earned an associate’s degree in computer technology and worked for many years in IT before experiencing mental health issues.

“I didn’t have the right balance of therapy and medication,” Wilkerson says. “There was a time when I didn’t get out of bed for two weeks. And if you don’t show up for work, you end up not having a job. I had no safety net to fall back on.”

Wilkerson received assistance from a VA program dedicated to homeless veterans, which helped him manage his symptoms and get back on his feet.

“I qualified for the VA’s vocational rehabilitation program,” Wilkerson says. “I thought of staying in IT but chose instead to pursue a degree social work because I was impressed by how social workers helped me. Many of them graduated from the program at EMU.”

At Eastern, Wilkerson began taking advantage of the services available to student veterans at the Kettles Military and Veteran Services Resource Center

“I can’t say enough good things about the center,” Wilkerson says. “The staff there have provided me with a lot of help and guidance—particularly with navigating the financial aid system and resume writing. The center also serves as an office where the VA’s vocational rehab counselor can see me.”

Student veterans often meet at the center to study and mingle.

“I go there to do homework, hang out and have lunch with fellow vets,” says Wilkerson, who lives on campus at the Cornell Courts Apartments. “There are a lot of social opportunities.”

Wilkerson volunteers at Swoop’s Pantry, a food pantry for EMU students. He also works part-time as a residential support specialist for Avalon Housing in Ann Arbor, which provides permanent housing to people with low-income. For his social work internship, Wilkerson is helping the homeless at the Delonis Center in Ann Arbor—the shelter where he once lived.

“I asked to be placed at Delonis,” Wilkerson says. “Coming back was surreal, but I’m learning more every day about how to help people through the intake and housing process. It’s like coming full circle.”

Wilkerson plans to pursue a master’s degree in social work and become licensed to work with the homeless and veteran population.

“My experiences give me a unique perspective,” Wilkerson says. “I have a lot of empathy and think I can give people hope. There’s too much stigma around mental health issues. It’s possible to get out of what seems like a hopeless situation and have a productive life.”