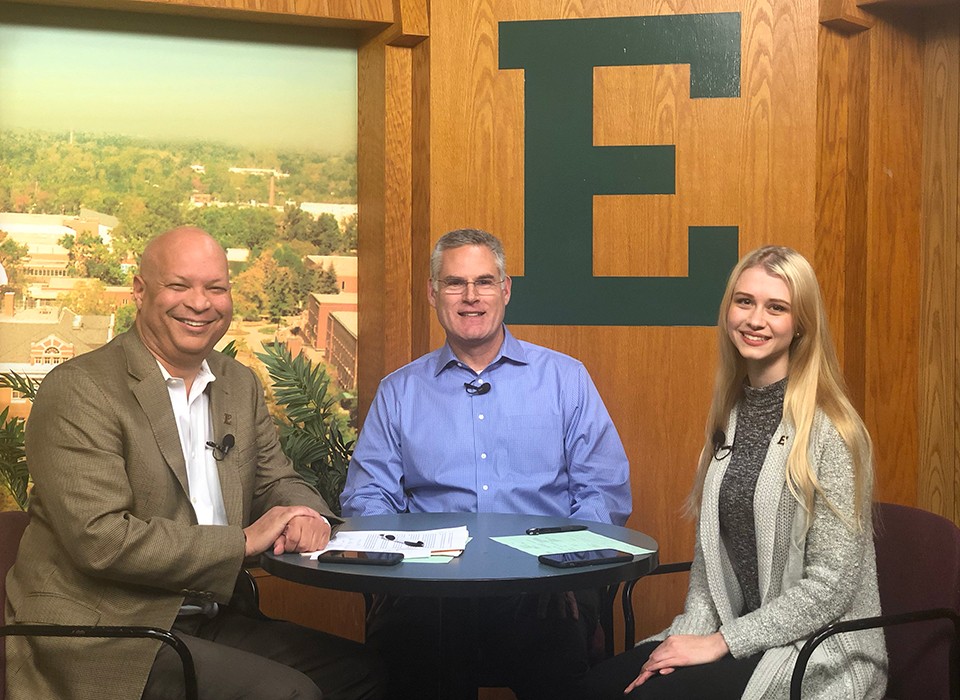 Creighton has taken the Eastern Michigan football team to two bowl games in the last three years. In the interview, he talks about his efforts to recruit and develop young men – not only as football players but also as good citizens with a commitment to strong academics. The program also takes a look at the newly opened Student-Athlete Performance Center, which Creighton described as a “game changer” for student athletes at Eastern in all sports.

Marching Band Director Chandler Wilson is new to Eastern, having started over the summer. He has quickly made a mark among band members and fans with the marching band’s energetic and lively performances. He describes his own interest in music at an early age and how his career path has brought him to Eastern Michigan.

The episode also features a fun and energizing look back at festivities of Homecoming Week at Eastern, which took place from October 7 - 12.

Now in its third season, EMU Today TV features positive programs, events and initiatives at Eastern, and provides opportunities for viewers to learn more from University deans, faculty, students and administrators about activities at the University.

The student co-host for the program is Alexis Berent, a senior majoring in Electronic Media and Film Studies with a minor in Theatre Arts. Berent, from Canton, Mich., has been acting for 13 years in theatre, film, and commercial work. Mark S. Lee, host of CBS Radio’s Small Talk with Mark S. Lee, is the other co-host. Lee is an Eastern Michigan University alumnus, and part time lecturer of Marketing at Eastern. He is an entrepreneur, Crain's Detroit blogger and frequent contributor to various Detroit-area media outlets on business topics.

Jadan Shorts, a junior majoring in Journalism and a minor in Communications, is a field reporter to provide coverage of events occurring on campus. She is a spots reporter for the University’s student newspaper, the Eastern Echo, and a host of the E-TV production, “The Dish.” Shorts is from Ohio.

Students in the Communication, Media and Theatre Arts program are actively involved in the production, gaining media and production experience they can include on their resumes and helping lead to careers once they graduate.

In addition to viewing on the University's YouTube channel, the program airs on the following days/times through the month on Xfinity On Demand, beginning Thursday, November 7:

The program is directed by Keith Damron, associate professor of Electronic Media and Film Studies. During his career, Damon has worked as a production engineer and writer for E Entertainment Television, Universal Studios and Warner Brothers Animation. He has worked at Eastern since 2002.

Steve Martin, radio and TV engineer in the School of Communications, Media & Theatre Arts is chief engineer and responsible for set design.

Lewis Hershey, head of the department of marketing and professor of marketing in the University’s College of Business, and Walter Kraft, vice president for communications, are co-producers along with Lee, who originated the program concept.

New episodes of EMU Today will be produced monthly through March 2020 and available on Xfinity On Demand. Xfinity customers can access the program by the following: Using their remote press Xfinity>On Demand>XFINITY Services>Get Local. For non-Xfinity customers, all episodes also will be available on the Eastern Michigan University YouTube channel.