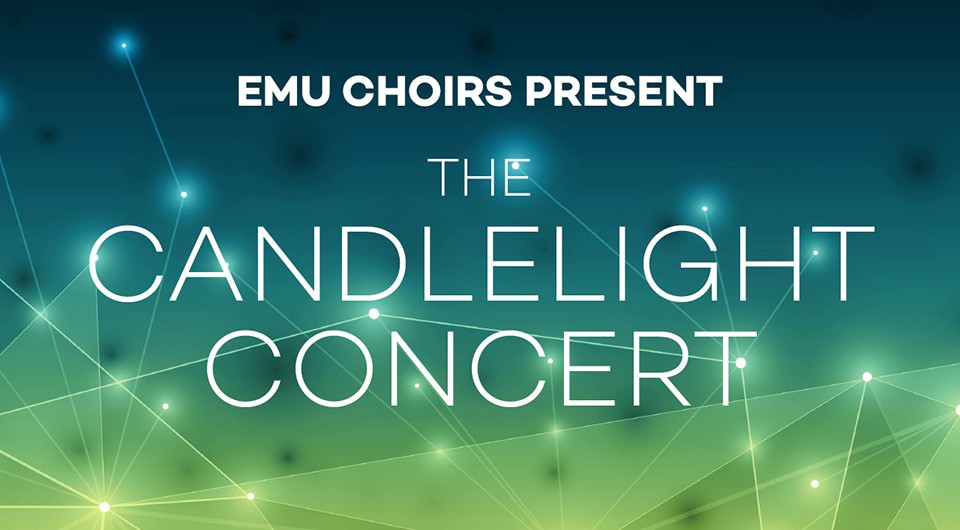 YPSILANTI – The Eastern Michigan University Choral Program plans to brighten and celebrate the holiday season with two Candlelight Concerts, to be held at EMU Saturday, Dec. 14 and in Detroit’s Orchestra Hall on Sunday, Dec. 15.

The first annual Candlelight Concerts will involve two performances, at 7:30 p.m. Dec. 14, in Pease Auditorium and at 3:30 p.m. Sunday, Dec. 15 in in Detroit’s Orchestra Hall.

Brandon Johnson, Director of Choral Activities at Eastern, is excited about the new concerts and establishing a vibrant artistic presence in Detroit.

“This concert is a terrific opportunity for EMU to  contribute to the southeast Michigan musical community, in Detroit’s premier concert hall,” Johnson said.

EMU Choirs stage a wide variety of concerts and outreach events each year, but Johnson envisions the Candlelight Concerts as a signature event.

“We are positioning this set of concerts as an outreach to thousands, to share in the joy of the holiday season, and we fully envision this tradition to be a staple in the southeast Michigan musical community,” Johnson says.

Over the past five years, the Eastern Michigan University Choral Program has built a significant national reputation through its concerts and outreach programs.

Each year the EMU Choir embarks on a national tour to different regions throughout the United States. This year, the choir will travel to America’s west coast, with concerts in California, Utah, Nevada, and Idaho.

This past April, the choir returned home from an international tour of Austria, Germany, Czechia and Poland, with a signature concert at the Universitas Cantat in Poznan, Poland.

Johnson notes that in addition to the choir’s busy concert schedule, the program is committed to community outreach programs that support local high school music education.

“We have collaborated widely throughout the state in support of choral music students of all ages and abilities,” Johnson says. “In recent years, we have performed in collaboration with dozens of programs with many different initiatives.

“For example, we will host a four-day residency in April with Morten Lauridsen, America's most widely performed composer. We will be working with hundreds of high school singers and community musicians through this process.”

Johnson notes that ticket revenue will be considered donations to EMU Choirs and directly spent on supporting EMU students.

Candlelight Ticket Costs are as follows: