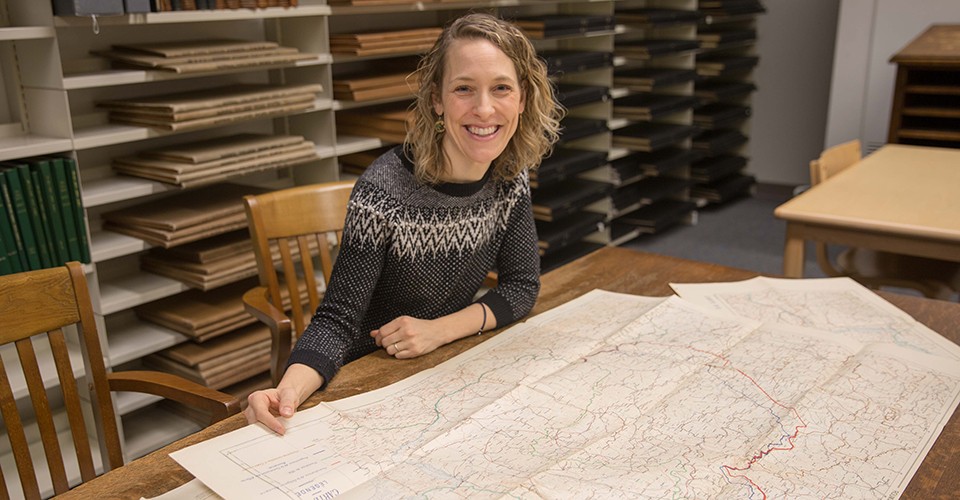 YPSILANTI – Among the jewels at Eastern Michigan University is a special intellectual realm in Halle Library, the University Archives. It’s a place where researchers “can make sense of the past, the present and future,” says EMU Archivist Alexis Braun Marks.

Braun Marks, who was hired in 2011, spoke recently at an EMU conference focusing on the papers of Mark Jefferson, a former EMU geography professor who drew the maps used by delegates in their negotiations in the Versailles Peace Conference that established a new world order after World War I.

Opening up the collections for research

Among Braun Marks’ first tasks was getting a handle on the various collections and materials EMU possessed, including Jefferson’s voluminous papers, slides and maps – boxes and boxes of material.

The next crucial step was to offer access to such materials so the EMU community could do in-depth and original research on a variety of topics associated with Eastern’s history. There are now more than 550 collections formally described online that are open for research.

The archives offer invaluable research experience for students. For example, for the second year in a row, Braun Marks and the archives have been working with and hosting students in the History 490 senior seminar class taught by professor Mary-Elizabeth Murphy. Students must complete a major research project in the class, using the original materials in the archives. Fourteen students publicly presented their work on Monday, Dec. 9 and Wednesday, Dec. 11 in Room 202 Halle Library.

An example of such work comes from EMU alumnus Dustin Elliott, a former student of Murphy’s who spoke at last year’s seminar paper presentations and also at the Mark Jefferson conference, held in Strong Hall this past fall.

Elliott noted that Jefferson was fluent in six languages and traveled to Argentina in the 1880s, where he served as an assistant astronomer at the National Observatory in Cordoba.

“Mark Jefferson was one of the more fascinating individuals that I have had the pleasure of learning about …” Elliott told a rapt crowd in the Strong Hall Auditorium. “Pinpointing Jefferson’s experiences around the world was vital in order to observe more deeply his appointment to the commission and his importance at the (Versailles) conference.”

Elliott said it was a joy to be able to utilize the Mark Jefferson papers in such an instrumental way in order to conduct his research.

“The experience I had working with them in the archives here at Eastern will certainly inform the way I conduct research, analyze, and read historical documents moving forward,” he concluded. “I strongly encourage any students to utilize this excellent resource whenever possible.”