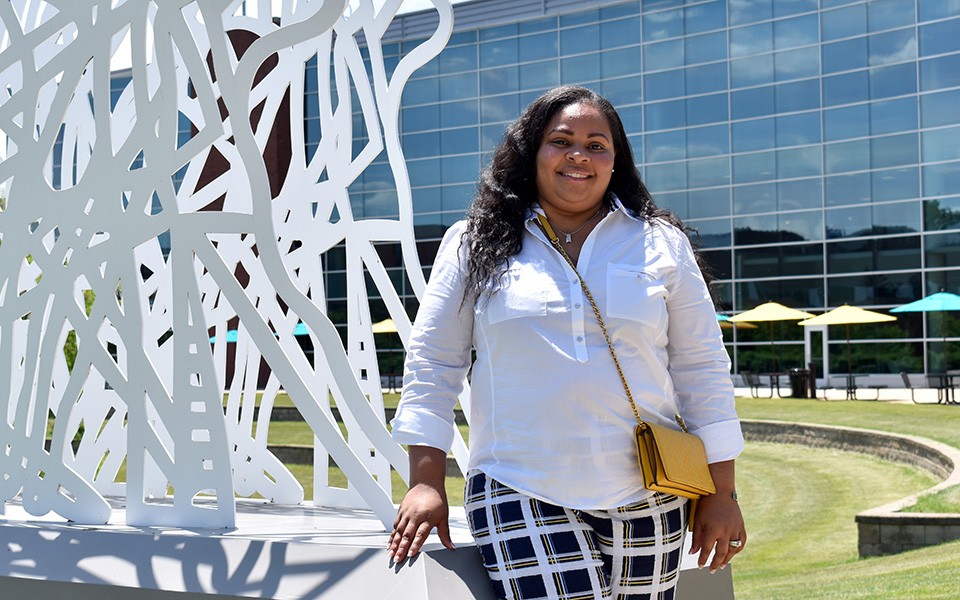 Many students at Eastern Michigan University overcome barriers to achieve their dreams of higher education. Undergraduate student Marqueisha Brown has experienced her share of hardships from being hit by a drunken driver, losing her home, giving birth to twin daughters prematurely and being blind for two weeks.

Now, at 37 and after a few career stops, Marqueisha is pursuing a degree in social work with the intent of providing the same type of advocacy that helped her through the tough times.

Before coming to Eastern in 2017, Marqueisha pursued early childhood development at Oakland Community College while running an in-home daycare. Many of her clients were low income and had little resources for childcare. Marqueisha provided assistance to her client families and during that time realized her own passion for advocacy.

“I realized that hey, I want to help kids but I want to do it on a bigger scale,” Marqueisha says.

She then applied and was accepted into EMU’s social work program after receiving a recommendation from a friend.

Marqueisha likes and loves a lot of things about Eastern.

“I feel like there’s a lot of inclusivity,” says Marqueisha. “I feel really comfortable here, and I feel like the faculty goes above and beyond.”

Receiving an Eastern education means more to Marqueisha than just improving her career and professional status. She also wants to provide a positive example for her twin girls, 8, who were born at just 2 lb. 6 oz. There are times when all three will sit down together and do homework, and they celebrate each other’s successes such as when somebody brings home an A-paper.

Marqueisha’s dream of finishing her degree nearly came to a crashing halt in late 2018 when financial aid dried up and she owed nearly $2,000 for the current semester and $5,000 for the following semester. Suddenly, Marqueisha was out of options and almost out of

time. Then she contacted Matt Mortier, Director of Donor Relations, at the EMU Foundation. She was directed to financial aid and was quickly awarded the Genuine Eastern Michigan Endowed Scholarship (GEM) to cover her current tuition costs.

She calls it a “life changing” moment.

Now Marqueisha’s future is clear and she routinely puts in 16-hour days, between work and classes, to achieve her goals.

“I will be an EMU alumni and I will give back,” she says. “Out of all of the students, I was chosen (for the GEM Scholarship) and I’m just so grateful.

“It really does change people’s lives because it changed mine.”