Tribute cites his role as a scholar, mentor and widely sought community resource 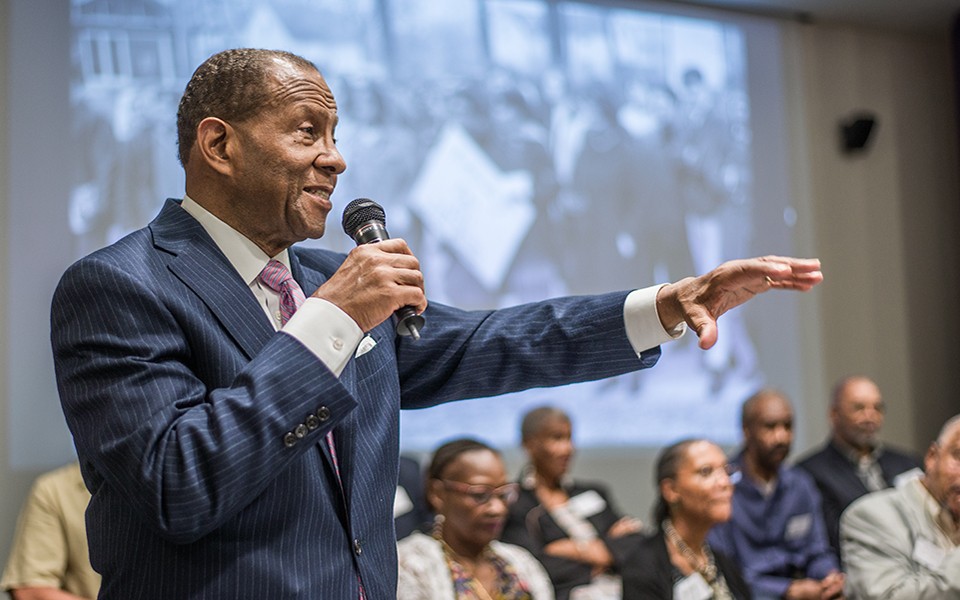 YPSILANTI – Emeritus professor Ronald Woods, who during a distinguished 43-year career at Eastern Michigan University mentored hundreds of students and was a key campus and community resource sought for his expertise on many issues, has been honored by the state of Michigan with a special tribute signed by Governor Gretchen Whitmer.

The tribute reads as follows:

LET IT BE KNOWN, that the retirement of Professor Ronald C. Woods, J.D., as a distinguished educator brings to a close an era of dedicated service to the young people of Eastern Michigan University (EMU). We are pleased to join with students, faculty, parents, family and the community in expressing our appreciation and best wishes to this dedicated professional.

In 43 years of service as a teacher and mentor, Professor Woods excelled in the noble pursuit of educating students, a tradition that is a vital part of Michigan’s heritage and future. Throughout his career as a professor of Africology and African American Studies, he provided valuable expertise on the impact of social policy on public school systems, university classrooms, and the wider community. His knowledge of the relationship between law and segregation shed much needed light in some of the more notable missteps in public policy. As a scholar and consultant, he is prolific in his ability to counsel school systems on various aspects of desegregation and diversity, while lecturing and publishing on different topics like African policy in the horn of Africa.

Professor Woods’s professionalism and thoughtful demeanor will be missed at EMU. His leadership as first head of African American Studies at EMU is recognized as instrumental in establishing the department as an important addition to the university’s curriculum and culture. He was also highly regarded in serving as director of EMU’s Institute for the Study of Children, Families and Communities from 2001 to 2004.

Beyond academic pursuits, Mr. Woods’s contributions included serving as interim president of the Michigan Council of Black Studies and as a member of the Board of Directors of the African American Cultural and Historical Museum of Washtenaw County. He also consulted with the Charles H. Wright Museum of African American History and was honored to serve on the Board of Directors of his alma mater, Wittenberg University. Besides these active professional roles, as a civic minded citizen, Mr. Woods found time to serve on the Board of the Ann Arbor Housing Commission. These are just a few of the many accomplishments that represent the outstanding service and contributions he has made to EMU and the community.

IN SPECIAL TRIBUTE, Therefore, This document is signed and dedicated to express our admiration and appreciation to Professor Ronald C. Woods upon his retirement as a distinguished educator at Eastern Michigan University. May he and his wife Wendy enjoy many years of health and happiness as they turn the page on this chapter of his illustrious career.

Surprised and humbled at the honor

Woods started at EMU in 1976 as a lecturer in the Afro-American Studies program and went on to become a professor and head of African American studies at Eastern. He retired on Aug. 31. 2019. He received a variety of Eastern’s highest honors, including the Martin Luther King, Jr. Humanitarian Award, the Ronald W. Collins Distinguished Faculty Award and the John W. Porter Distinguished Service Award.

Woods said he was surprised and humbled by the state honor.

“You do what you do in the course of your (career) journey because of the passion for what you do,” he said. “What I think most about is the marvelous array of students who enriched what I was doing and gave great meaning to what I was doing as well. They really are the ultimate measure of what I’ve been able to do.

“The other thing (I think about) is the array of people my life has intersected with – staff, colleagues and members of the great community of southeastern Michigan, all of whom acted as a leavening agent for what I was doing.

“I am a man of faith. And I really feel quite blessed to have had the opportunity for that marvelous season (of my life).”

Woods expressed appreciation for those who helped him, noting he tried to pay that consideration forward.

“When I came to Eastern Michigan, I obviously knew quite little about the setting and the personnel,” he said. “There were those that mentored me and brought me along. I’m so glad I could do for the current generation of students and faculty what a previous generation did for me when I first came to Eastern.”