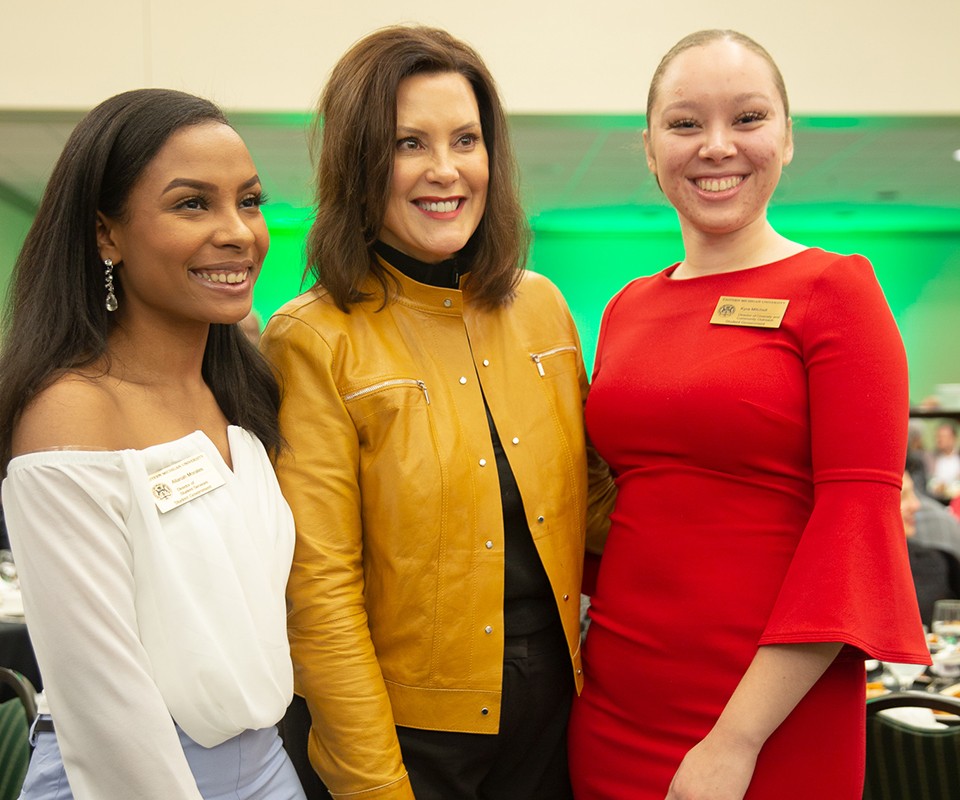 YPSILANTI –  Two Eastern Michigan University students, Allanah Morales and Kyra Mitchell, were honored Monday, Jan. 20 for the ways in which they powerfully honor diversity, the promotion of peace, community service and the values of Martin Luther King, Jr. The awards were presented at the President’s Luncheon, part of the University’s 34th annual celebration of Dr. King’s life and legacy.

Morales won annual The Evans-Strand Peace Award, which is modeled after the Nobel Peace Prize to recognize an individual who has made significant contributions to advancing the understanding and acceptance of diversity on the EMU campus. The award is presented annually to a student who is involved in activities or projects that seek to promote peace among diverse populations at EMU.

Mitchell received the Martin Luther King, Jr. Scholarship Award, which recognizes an EMU student who has demonstrated a commitment to promoting respect and improving the quality of life for all people, consistent with the ideals of Dr. King; along with service to Eastern and/or the southeastern Michigan community

Morales is a Detroit native and a junior at Eastern. She is currently studying criminal justice, with a concentration in legal studies. Since stepping foot on Eastern’s campus at the age of 17, she has been continuously active within the community.

She is the 2018 Miss Gold titleholder of Alpha Phi Alpha Fraternity Inc.’s Miss Black and Gold pageant, is president of the Latinx Student Association, Director of Student Services for EMU’s Student Government and is an active member of Sigma Gamma Rho Sorority Inc.

Last year, Morales was awarded the NPHC “Neo of the Year” award, the “Faith Award,” and received congressional recognition from Congresswoman Dingell. In addition, she is currently a member of the Community Leaders Program for Google, where she teaches digital literacy to small and local businesses.

Upon graduation, she plans to pursue a master’s in Forensic Science. She says her biggest aspiration in life is to one day create her own foundation designed to combat human trafficking and provide resources to survivors.

“I’d like to take a moment to remind my class that we are the change of this University,” Morales said.

Mitchell, a Saginaw native and senior accounting major at EMU, has quickly emerged as a leader on campus.

After obtaining her bachelor’s degree, she says she intends further develop financial literacy in communities of color and help black businesses thrive. In addition to that, Mitchell plans to continue to push for black leaders to occupy spaces where there is a lack of representation.

Mitchell currently serves as the Chairman of the National Youth Work Committee, President of the Michigan State Conference Youth and College Division, and Vice-President of EMU’s Black Student Union and National Association of Black Accountants.

She also serves as the Director of Diversity and Community Outreach for Student Government. In addition, she’s a member of the Honors College and the Black Honors Student Organization. Throughout her time in the NAACP, she has worked with various units across the state and region to implement training, ensure units have the resources they need, and ultimately expand the NAACP’s reach to communities that need it.

“We have some so far, but we still have a long way to go,” Mitchell said in accepting her award.

Also at the luncheon, Michigan Governor Gretchen Whitmer received the annual EMU Martin Luther King, Jr. Humanitarian Award for her long and distinguished service to the state of Michigan.

Whitmer, who gave the keynote address during the “Let’s End Campus Sexual Assault Summit” held at EMU on Dec. 3, praised what she’s observed at Eastern.