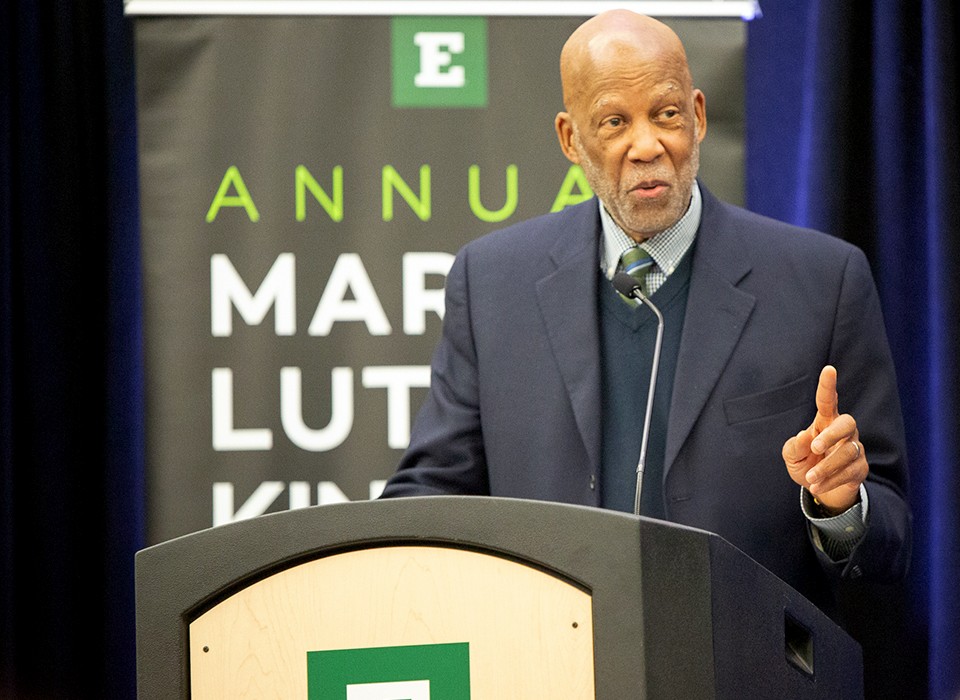 It sounds simple, but can be a powerful challenge amid the countervailing forces in today’s world.

But that’s what Terrence Roberts urged – a desire to see truth embraced by all of us – in his keynote address during Eastern Michigan University’s 34th Annual Martin Luther King, Jr. celebration on Monday, Jan. 20. Roberts spoke to a capacity crowd in the Student Center Auditorium while many others watched his talk via livestream.

Roberts is one of the “Little Rock Nine” who desegregated Central High School in Little Rock, Arkansas in 1957, following the 1955 decision by the U.S. Supreme Court in the Brown v. Board of Education case to integrate schools.

As a 15-year-old eleventh grader, he joined eight other students who were chosen after a selection process and became one of the first nine black students to go to a formerly segregated large public high school in Little Rock, Arkansas.

A leader of all people

Another example of needed truth is King’s 1968 unveiling of his criticism for the Vietnam War, echoed more recently in criticisms of the Iraq War, both truths that had to be told, in Roberts’ estimation.

Roberts recalled King’s 1967 book, “Where Do We Go from Here: Chaos or Community?” which advocated for human rights and a sense of hope.

“We’re uneasy with injustice, but unwilling to pay a significant price to eradicate it,” Roberts said, adding that the question still persists and that chaos can be an agent for positive change at times.

The mythology of ‘race’

Roberts said not to accept what he terms “the confining mythology of race,” saying there is no such thing, but that instead we are far more defined and bound by our common ancestry.

Roberts’ other observations and points included:

• We need a female president to run the country.

• “We have lost our moral compass as a nation (and) if this continues, it may play out in a very bad way,” Roberts said, citing examples of fallen empires, such as Egypt.

• When members of his all-black school were asked who’d volunteer to attend Central High School, 150 hands shot up, including his. But then came many parental vetoes around town along with the school board backing down. When the NAACP mounted a challenge, the 10 remaining volunteers were tabbed.

You are the CEO of your own learning

• Roberts’ approach to life and personal growth was shaped early on, by his first-grade teacher, who told her students that, “You must become the CEO in charge of your own learning.” Roberts says he “took that to heart” and kept on learning, no matter where he was or who he was with.

• Roberts cautioned against reflexive activism, saying you should learn first before protesting.  “Prepare, prepare, prepare vs. making a career out of simply marching,” he said. “It’s so important to learn.”

In summing up his theme, Roberts offered a biblical phrase that has persisted through the ages and remains useful in many contexts:

“And you shall know the truth, and the truth shall make you free.”