Mark Higbee co-authors “Frederick Douglas, Slavery, and the Constitution, 1845,” a guide to playing one of the “Reacting To The Past” historical role-playing games 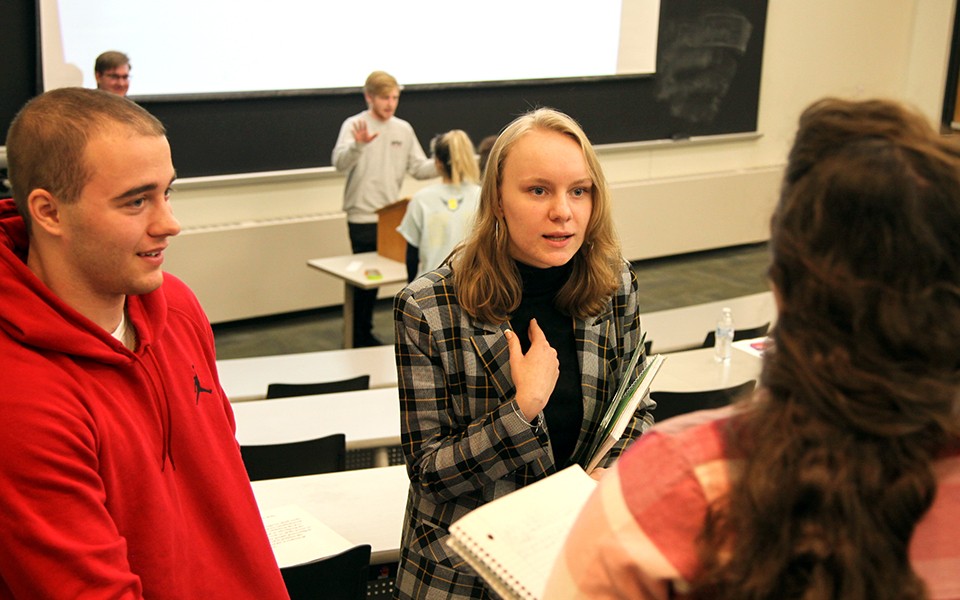 YPSILANTI – At a time when the specters of racism and polarization have again reared their ugly heads on the American scene, students at Eastern Michigan University went back in time, to 1845, and confronted an explosive historical question last semester that touches on both themes.

How, in a nation founded on the ideals of equal rights and freedom, could the institution of slavery become so entrenched and long lasting? How was slavery justified at that time, and how was it criticized?

The students did far more than simply discuss such topics in the American history class taught by longtime EMU professor Mark Higbee. They engaged in an elaborate role-playing game, entitled Frederick Douglass, Slavery and the Constitution, 1845.

The Constitution or some “higher law?”

The game and its rules, roles, contexts and supporting documents are spelled out in a recently published book of that title by Higbee and co-author James Brewer Stewart, a leading national authority on slavery and an emeritus professor of history at Macalester College in Saint Paul, Minn.

In the game, at a literary forum, students consider the newly published “Narrative of Frederick Douglass” and hold a hearing on former vice president and political theorist John C. Calhoun’s view of slavery as a “positive good.” In addition, players address the U.S. Constitution, its original protections of the slaveholders’ power, and a central question: Are Americans more beholden to the Constitution, or to some “higher law” that rules the day?

The Douglass book marks a milestone for Higbee. In 2009, he accepted the request of then-EMU Provost Jack Kay to create a Reacting to the Past game on Frederick Douglass and slavery in American history. The task took a decade, but in June 2019, it was published by W. W. Norton & Company.

Long before publication, however, the game was used in many classrooms across the country. Higbee says his only disappointment with the Douglass game is that Jack Kay, who died in 2015, did not live long enough to see its success.

Higbee describes the game, as “an attempt to get students to confront the biggest problem in all of U.S. history.”

Douglass, a former slave, became one of the abolitionist movement’s most compelling leaders, noted for his eloquent oratory and writings.

“Students become highly engaged, and learn the material at a deeper level,” Higbee says of the game. “Lots of issues remain, as racism is still with us in America. (The game) is history, but it has powerful relevance to the present.”

In Higbee’s class this past fall, EMU student Caitlin Peterson, a freshman majoring in finance, played the character of James Brown, who was a savvy business man for the status quo side.

“I enjoyed the game because I was able to learn by embodying my character and trying to emulate his thoughts, by putting myself in the situation that he would have faced,” Peterson said.

Sofie Van den Bulck, who played Frederick Douglass and is pictured above in the plaid jacket, said the game helped her to deeply understand the learning material. "It's a really creative way to engage students and make it fun at the same time," she said.

David Blight a professor of history at Yale University and author of a Pulitzer Prize winning book on Douglass, called Higbee’s book “a serious history placed in the midst of a wondrous game about the proslavery and antislavery debates of 1845.”

“It contains elements of surprise, contingent turns of fate, ideology, theology, deep historical context … as well as many reminders of how we face similar crises today with similar stakes …” Blight wrote of the book.

• A banquet honoring John C. Calhoun at Delmonico’s in New York City. Calhoun was known as the most influential pro-slavery figure of his time.

• A debate at the Broadway Tabernacle Church in New York City.

A deep immersion in their roles

A visit to Higbee’s class quickly reveals the degree to which students adjust to and become immersed in their roles.

“Once you accept it, you can’t abandon your role,” Higbee notes. “The most important thing about the Douglass game is that it creates a great excitement to learn with my students.”

There, they confront the ultimate American paradox: “How did a country founded on and dedicated to the concept of equality adopt the largest and most profitable system of slavery in the world? “

Mark Carnes, a professor of history at Barnard College, in New York City, is the originator in 1995 of "Reacting to the Past," a method of teaching that involves elaborately designed games such as the Douglass game, in which students assume historical roles from a famous moment in history, and then pursue the goals of their assigned character - in collaboration with some classmates and in opposition to others.

Reacting is now used at more than 300 American colleges and universities, including Eastern. The games last from two to five weeks and transform students' classroom experience in ways most of them find exciting and worthwhile, yet very demanding.

Higbee began at EMU in 1994 and has been teaching Reacting to the Past in a variety of his courses at Eastern since 2006. He estimates more than 1,000 students have experienced the method through his classes and those taught by other EMU faculty members.

Higbee, who earned his bachelor's in history at Antioch College in Ohio and then his master's and doctorate at Columbia University, says the Reacting method also teaches skills in research, writing, public speaking and teamwork.

“All Reacting games inspire students to confront difficult ideas, to engage in both teamwork and competition, and to imagine being someone they are not, whose beliefs mattered,” Higbee says. “Reacting is intellectually rigorous and fun for students, who also develop their communication skills as a result of the game."

Blight notes the complexity of the questions that arise as students assume their roles and gain a deeper, more nuanced understanding of a critical time in American history.

“Why were these debates so full of fear?” he says. “Were they resolvable? Did common ground exist on the slavery question – in the Constitution or in the hearts and minds of Americans?

“Students will live and debate these questions in an unforgettable experience.”

Higbee’s published game will be one of those featured at the 20th annual Reacting to the Past (RTTP) summer institute, to be held at Barnard College in New York City, June 11-14, 2020. Dozens of instructors from around the country will sign up to play the game in a compressed, two-day workshop format. These workshops are the main way that instructors learn how to run RTTP games in class.

Later, on September 11-12, at the State University of New York at Geneseo, another such workshop will be held for the Douglass game. These two events will be the first workshops of the Douglass game since it was published, but many institutions across the country have hosted workshops with the unpublished game.

“My coauthor, James Stewart, and I are both thrilled that our project continues to reach new instructors and, through them, students," said Higbee. "Frederick Douglass confronted the really big challenges of American history, and through this game, college students can do so too, in a dynamic classroom experience."