World-famous illusionist Franz Harary, a former Eastern Michigan student who cites the University as an element of his singular success, awarded an honorary master’s degree 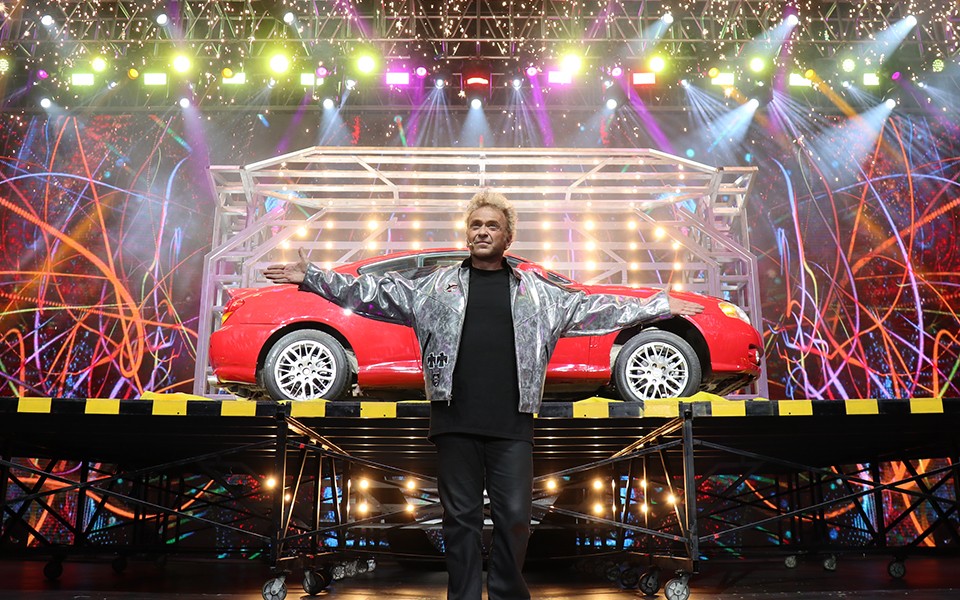 YPSILANTI – Franz Harary, an internationally acclaimed illusionist known for breaking boundaries across mediums and redefining the art of magic, has been awarded an Honorary Master’s Degree in Humane Letters – Theatre by the Eastern Michigan University Board of Regents.

Harary, an Ann Arbor native who attended EMU in the 1980s, is best known for designing and performing illusions of his own creation worldwide. His technical achievements in the world of magic are respected throughout the industry, and his productions have broken attendance records across the globe.

As a college student studying music and dancing at Eastern, Harary was already creating halftime illusions for the University marching band.  His illusions led to wider recognition, in particular, work commissioned for Michael Jackson’s “Victory Tour” and his own “mega magic” stunts, including making the Taj Mahal levitate and the NASA Space Shuttle disappear.

Writing to Michael Jackson, and getting an answer

Harary attended EMU from 1980-84 on a partial scholarship for musical theatre. There he found a welcoming campus that abounded with opportunity.

He began doing stunts for the marching band and opera department, teaching himself to design magic for big crowds. His abilities and range grew, and when Michael Jackson, then in his prime, burned his hair during a commercial, Harary decide to write the mega star and spell out what he could do for him.

After being relayed through a chain of associates, he talked to Jackson, flew out to meet him and began to work on his shows. Just like that.

“What I learned at Eastern was how to negotiate through society, to get through to where you want to be,” Harary says now, speaking from one of his three homes, this one in Hawaii. “Eastern is this great place – there is so much opportunity and there is no pressure.”

With the EMU marching band, he had a large and giant audience for weeks during the fall.

“How can I teach myself to do big magic?” Harary recalls asking himself during those days. “With all resources at Eastern, all you have to do is think differently and ask yourself, ‘How can I tap into these resources and do what I want to do and get what I want and grow the way I want and benefit these people I’m working with? In my time there, it was a was win-win for all concerned.”

Then, once he became Michael Jackson’s manager of magic, Harary’s career “just kind of exploded.” With fantastic money to be made, he left EMU with a year of classes left. After the move to LA came gigs with stars of the day such as MC Hammer, Kool and The Gang and Run DMC.

It was perfect timing, as Harary could offer services that people didn’t even know they needed. Back then, there was no way for pop artists to compete on the live stage with their music videos on venues such as MTV. The solution was Harary’s new specialty –  illusion engineering – the creation of an image that runs counter to the laws of physics.

“Suddenly I came along,” he recalls. “I could morph you into a werewolf (as he did with Michael Jackson in his hit “Thriller”).

Harary, who attended Pioneer High School in Ann Arbor, now does 80 percent of his work in China, although a recent large production was shut us down because of the Coronavirus, as he quickly evacuated all this crew and went to his home in Tokyo.

Most famous person nobody has heard of

Harary’s modesty and lack of an eccentric or grandiose persona prevent him from being easily identified as a celebrity offstage. As one publicist states, “The most famous magician on planet Earth is a guy you’ve never heard of.”

The recommendation approved by the Regents at their regular meeting Feb. 13 reads in part: “For his world-wide innovations and contributions to the discipline of entertainment design and technology – integral components of EMU’s theatre program – and for his identification and promotion of Eastern Michigan University’s contribution to his lifelong journey, we are proud to recommend Franz Harary for an Honorary Master’s degree in Humane Letters – Theatre.”

“Firstly, it’s about building character,” Harary says now about the evolution he experienced at Eastern. “If you don’t have the drive to achieve something, you’re gonna sit in your dorm room and not do anything. But (EMU) is a giant buffet of opportunity.”