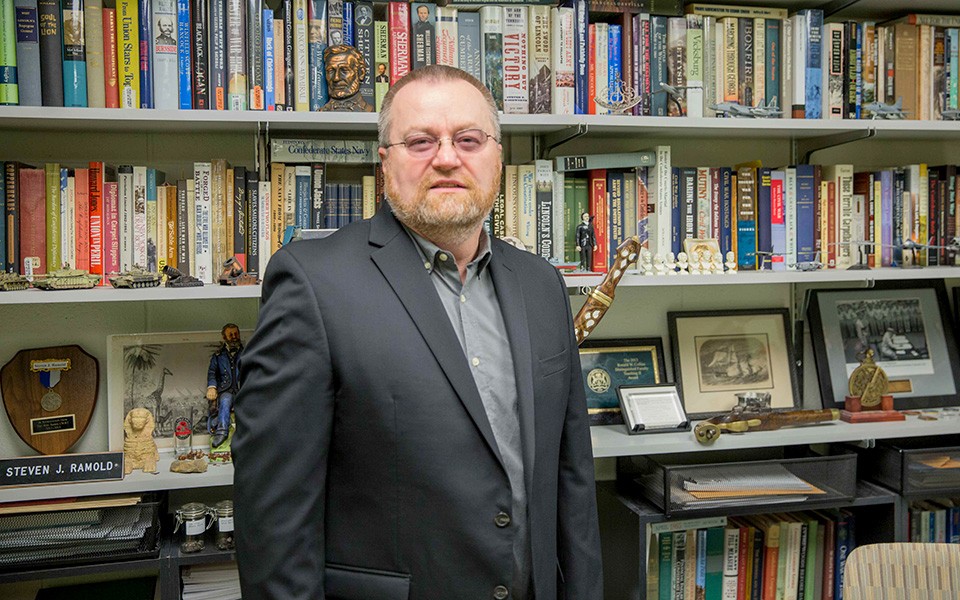 YPSILANTI – Eastern Michigan University history professor Steven Ramold specializes in understanding the American past and the lessons it teaches us, but it’s clear he’s making quite an impact in the present with his students and colleagues.

Ramold, who has taught at Eastern for 15 years, has been rated Washtenaw County’s best professor in annual reader rankings by Current Magazine.

The 2020 rankings, which cover a wide range of entertainment, eating and other elements of Washtenaw County, draw upon reader votes and are a popular feature of the magazine, which is published in Ann Arbor.

EMU students a pleasure to teach

"Teaching at Eastern is a great experience,” Ramold said upon hearing of the recognition. “The students have such a desire to succeed that it makes it a pleasure to work with them every day, and the chance to conduct research and publish my work is very fulfilling. Even after fifteen years at Eastern, I still look forward to going to work."

Ramold, who came to EMU in 2005, received the 2013 Ronald W. Collins Distinguished Faculty Award - Teaching II, one of the University’s highest academic honors. He has taught 19th century U.S. and American military history for 15 years at Eastern.

At EMU, Ramold’s course offerings have included travel courses, a course in American sports and a variety of online courses, along with regularly taught courses on the U.S. Civil War and American military history.

He has written four books on Civil War topics as well as writing more than 100 book reviews. His most recent book, “Obstinate Heroism: The Confederate Surrenders after Appomattox,” was published in March 2020.

In his Collins Award recognition, Ramold was praised as a skilled researcher and talented teacher who sparks strong interest in his students.

The following year, Ramold was Eastern Michigan's nominee for the annual Michigan Distinguished Professor of the Year Award. The award recognizes outstanding faculty contributions to undergraduate instruction and is sponsored by the Michigan Association of State Universities.