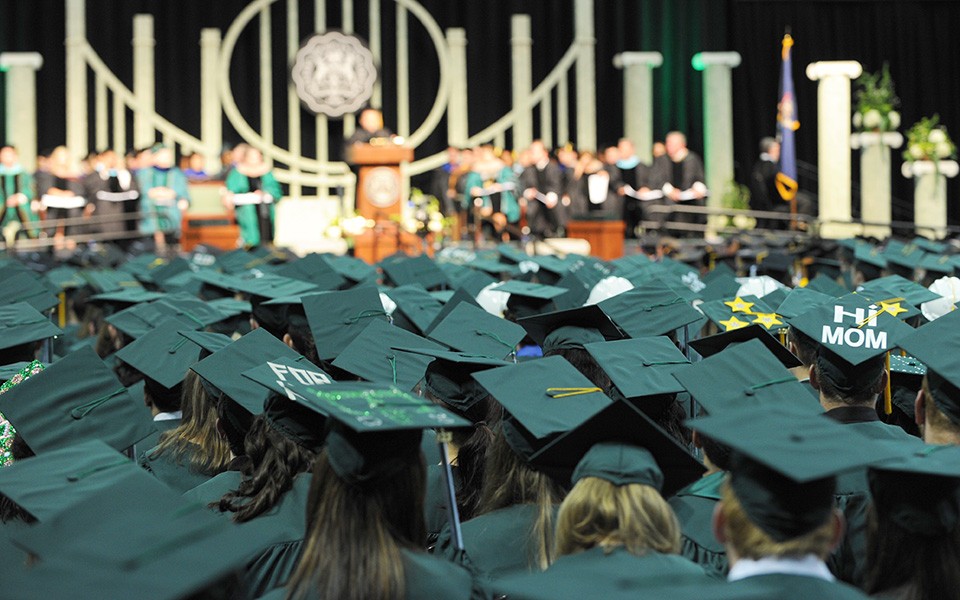 Tuttle will speak at the 9:30 a.m. and 1:30 p.m. ceremonies, and will receive an honorary Doctor of Commerce degree. The EMU Board of Regents approved the appointment at its regular meeting on April 23.

As member of the NYSE Group’s executive leadership team, Tuttle leads commercial outreach and business development. In this role, he oversees NYSE's Global Listings, Capital Markets, and Exchange Traded Products businesses and is responsible for managing the Exchange's relationships with more than 2,400 NYSE-listed companies and overseeing the creation of new offerings in emerging and growing sectors of the economy.

Since joining NYSE in 2007, Tuttle has served in a succession of roles including Chief

Operating Officer, Global Head of Listings, Chief of Staff, Head of Corporate Affairs, and as Managing Director of Global Affairs and Government Relations for NYSE Euronext, then-parent company of the New York Stock Exchange as well as five other financial exchanges in Europe.

Tuttle holds a MBA from the University of Notre Dame and BBA from Eastern Michigan University.

Dr. Donald Loppnow will receive an Honorary Doctor of Humane Letters at the ceremony. His leadership and administrative skills have been widely respected among the Eastern Michigan University community for several decades. He joined the University in 1974 as a lecturer in sociology with eight years of experience in the field of social work with an emphasis on child social services. He rose through the academic ranks to professor of social work, a position he held at the time of his retirement in 2014. He was instrumental in founding the Department of Social Work, now the School of Social Work and served as its first Department Head. Under his leadership, the undergraduate program grew to be the largest in Michigan and the master's degree in social work was developed, which was recognized nationally for being an exclusively evening and weekend program designed to serve non-traditional students.

Dr. Loppnow began his work in University leadership in 1990 when he was named interim director of the Office of Research Development. In 1997, he became associate vice president for Extended Programs. A half-time appointment as assistant to the president for strategic planning was added to his responsibilities in 2000. He was named by the Board of Regents to serve briefly as acting University president in 2004, and then became the senior executive for strategic planning and continuous improvement from 2004-2006. He served as provost and vice president for academic affairs from 2006-2009, with a change in title to executive vice president in 2007, and was named interim president a second time until 2008. After returning to the provost position, his intent was to step down in 2009 in order to return to faculty. His return was delayed for one year when he agreed to serve as vice president for advancement and executive director of the EMU Foundation. Then, for a third time, he agreed to serve as interim president until the arrival of President James Smith on July 1, 2016.

While his commitment to EMU for more than 40 years is extensive, his contributions to the community are equally commendable. He has served in leadership roles on the Board of Directors for the Riverside Arts Center, the Ypsilanti Area Community Fund, Big Brothers/Big Sisters of Washtenaw County, the Ann Arbor Hands-on Museum, the Ypsilanti Historical Society, the Ann Arbor Area Community Foundation and the 109-year-old town-gown organization, the Twenty Club. He has also served on the boards or committees of Dawn Farm, HelpSource, Ann Arbor Child and Family Services Coordinating Council, Junior League of Ann Arbor, Washtenaw United Way, and more. His participation in these organizations has proven him to be a hands-on leader and invaluable in strategic planning, grant writing, financial oversight, diplomacy, and manual labor when needed. In addition to his skill in bringing groups together, his patience, calm demeanor and fair, measured approach to complaints and controversy have moved these organizations forward.

Dr. Loppnow earned a Bachelor of Science degree from the University of Wisconsin, a Master of Social Work from Washington University, and a Doctor of

Philosophy from the University of Michigan.