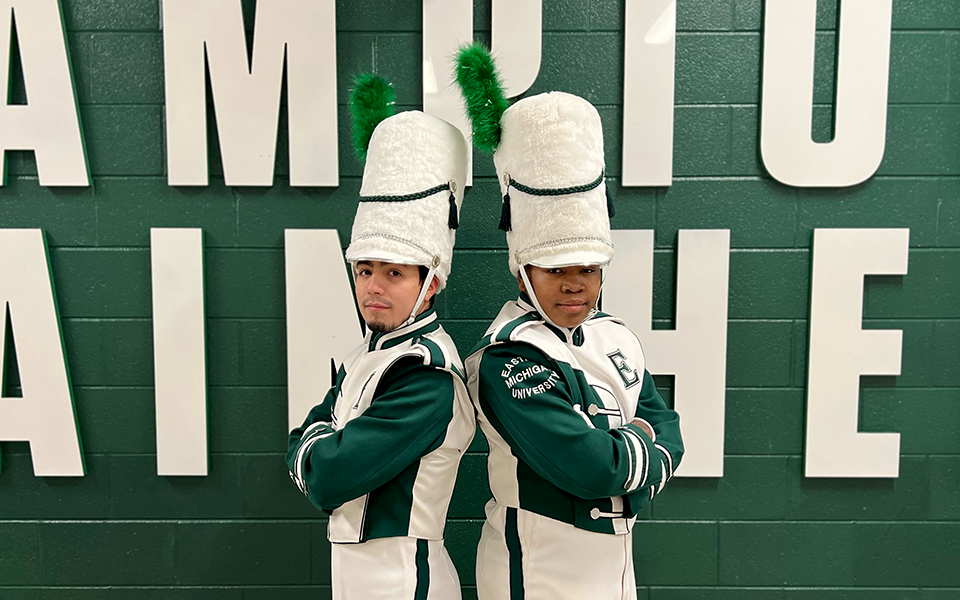 YPSILANTI -- Amara Booker and Noah Lopez, drum majors for the Eastern Michigan University marching band, are both in their fourth year and are excited to bring more recognition to the talented musicians that play in the band.

A big selling point for many on EMU is our diverse campus. When asked their thoughts on how the University’s diversity is or is not represented in the marching band, Booker says she has never been in a marching band where the diversity of the campus and the band have aligned, and the same can be said for Eastern. Booker noticed that local high school band programs are underfunded, which may contribute to people of color not joining the marching band or sticking with it in college.

Lopez echoes Booker’s sentiment. “Not many people in my high school and community continued to do band nor marching band in college, but I think if campuses like Eastern and other schools reached out to these high schoolers and middle schoolers and showed them that they can continue band, it would show more people of color that they can keep doing music and even be a leader in their community,” he says.

Lopez also says he remembered a time back in high school where two other students of color were made drum majors, and that back then, it didn’t seem to matter as much to him that they were people of color. “It was more that we saw these people as two very prominent leaders and two very good musicians that deserved the position,” Lopez says. He wants people to know that it is very important to put people of color in leadership roles, and at the end of the day, he and Amara are two people who love what they do.

Booker and Lopez are avid musicians outside of school, practicing alto saxophone and drumming, respectively, in their free time. Outside of music, Amara likes to watch and play basketball, and Noah likes to build Legos. Lopez is pursuing music in his career as a Music Education major, and Booker is double-majoring in Criminal Justice and Psychology.