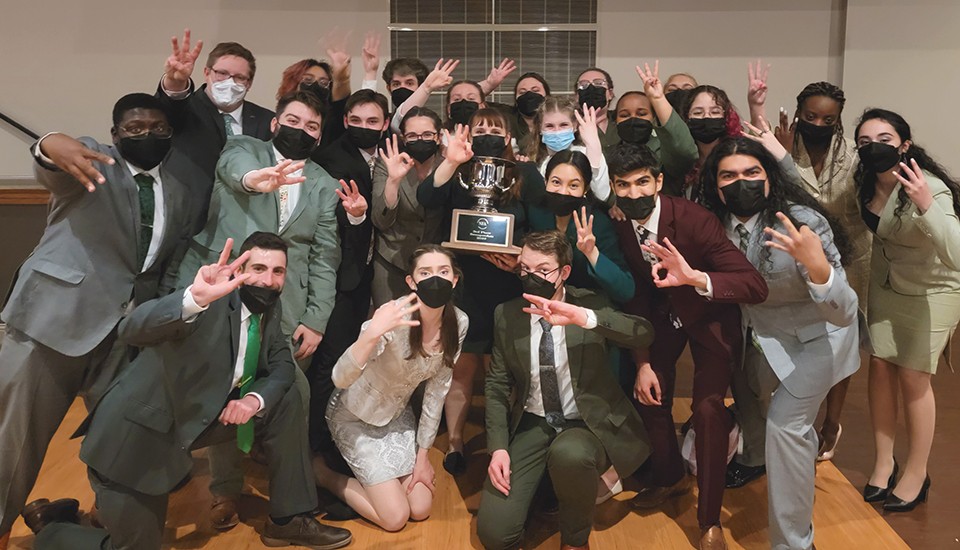 YPSILANTI – Eastern Michigan University’s Forensics Team added another prestigious honor to its historical list of successes: placing third overall in the nation and receiving an individual national championship at the National Forensics Association Tournament. The tournament consisted of more than 60 colleges and universities from across the country.

The national tournament showing extends the tradition of EMU Forensics as one of the most successful teams in the nation. The team has placed in the top 10 nationally for more than 40 years and won over 40 Michigan state team championships. Earlier this month, it placed fourth nationally at the American Forensics Association competition.

“The EMU Forensics Team has a long history of providing a platform for our students to showcase their exceptional talents on a national stage” said James Smith, president of Eastern Michigan University. “I’m extremely proud of our students and the outstanding faculty and staff who lead and support these efforts.”

Students and coaches were excited to return to the tournament in person after competing virtually for the past two years due to the pandemic, said Azar, “Nationals is an unforgettable experience for all those who attend it.

“Sometimes, things that we don't see coming threaten to derail our whole tournament, but having incredibly kind and supportive teammates sets the stage for individual success,” he said. “I couldn't achieve anything I have without my teammates, and I'm beyond proud to be a member of EMU Forensics' third-place team.”

In addition to Azar, the following students achieved national accolades in their respective categories:

EMU Forensics began its tradition of success with its first national championship in 1973. Notable past EMU National Champions include Brenda Alten, lead of Human Resources Communications with the J.M. Smucker Company; and the late Emeritus Professor Judy Sturgis Hill, a distinguished professor and EMU’s first National Champion, for whom the building that houses the University’s School of Communication, Media and Theatre Arts was renamed in her honor.

"This is the best the team has done in the past 15 years, as a program, we are grateful for the consistent investment the School of Communication Media and Theatre Arts continues to make in our students," said Timothy Ward, director of Forensics at EMU.

Estelle Hackos, a freshman at EMU and forensics newcomer, said the team changed her life. “These results speak to the drive, friendship, determination, and community we've built despite our adversity,” said Hackos. “This idea of working for each other no matter the challenge is special about the EMU Forensics Team. Our team, coaches, hard work, van rides, laughter, and unforgettable moments made this year's tournament one to remember. I am so proud of the amazing things we were able to accomplish.”