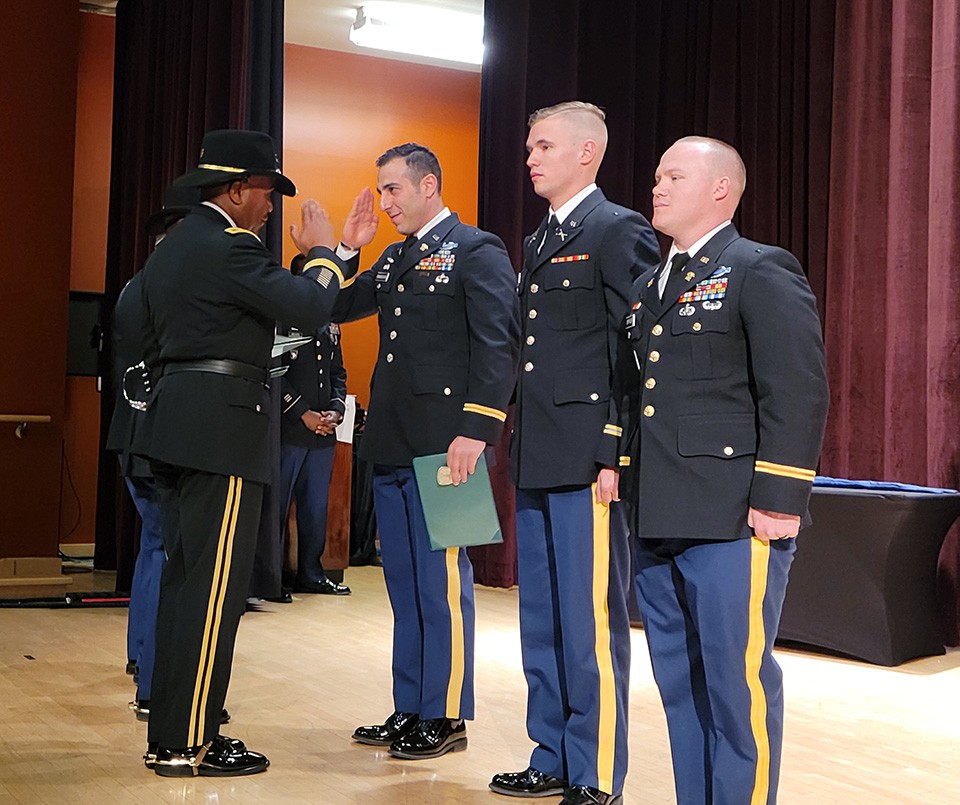 All ROTC seniors nationwide are ranked on the Order of Merit List each fall. A cadet’s positioning can be a major determining factor in receiving their branch of choice. The merit listing comprises academic performance measured by college GPA, physical fitness calculated by the Army Combat Fitness Test, and leadership outcomes based on instructor evaluations and platoon operation outcomes.

“It has been my distinct honor to work with this year’s graduating cadets, our newest Army second lieutenants, said Major Joe Agius, U.S. Army. “They have taken on every challenge we have set before them and consistently excelled. We have high expectations that they will master their upcoming Officer Basic Course and shine as they join their new units.”

Ries, a native of Tecumseh, Michigan, graduated with a bachelor of business administration in accounting from EMU. Upon commissioning, 2LT Eric Ries was selected for his top component and branch preference, active duty, infantry.

“To be considered a DMG is a nationwide honor. Earning the reward took four years of ambition and discipline, and it required spending late evenings in the library and gym. It is an awesome feeling to be recognized for all my hard work with such a cool award,” Ries said.

Stiffler, a native of Green Springs, Ohio, enlisted in the Army in 2013 as an infantryman and went to basic training at Fort Benning, Georgia. Stiffler was deployed twice before being accepted into the Green to Gold program, which provides time for enlisted personnel to finish their degrees and become officers in the United States Army. Stiffler is now back on active duty as a quartermaster officer and will return to Fort Bragg, NC, finishing the Basic Officer Leader Course at Fort Lee, Virginia.

“I'm glad that two of my peers were also able to earn this award, and it's proof of the hard work they also put forth. Another DMG recipient, Edwin Davoodian, always pushed me to be my best, and the competitive nature between him and I allowed us to have equal success,” Stiffler said.

Davoodian, a native of Tujunga, California, has always wanted to join the military since he was a kid. After enlisting in the Army in 2011, Davoodian went to airborne school after finishing basic

training and then to the Ranger Assessment and Selection program. While stationed at Fort Benning, Georgia, Davoodian was deployed six times. Davoodian was accepted into the Green to Gold program at EMU and graduated with a bachelor's in business administration. Davoodian is also a quartermaster officer and will return to Fort Bragg, NC, after finishing the Basic Officer Leader Course at Fort Lee, Virginia.

“I am honored to have earned this award,” said Davoodian “It represents the countless hours I spent ensuring that I was ready to become a second lieutenant in the Army. I was also lucky enough to have another DMG recipient, Dylan Stiffler, pushing me to better myself every day.”

The EMU ROTC program was established in 1952. Being one of the oldest and longest-standing programs, EMU ROTC has a legacy of producing officers of character for the Army. According to the Military Friendly® Schools list, EMU is ranked in the top 10 among large public universities.

Founded in 1849, Eastern is the second oldest public university in Michigan. It currently serves more than 15,000 students pursuing undergraduate, graduate, specialist, doctoral and certificate degrees in the arts, sciences and professions. In all, more than 300 majors, minors and concentrations are delivered through the University's Colleges of Arts and Sciences; Business; Education; Engineering and Technology; Health and Human Services; and its graduate school. National publications regularly recognize EMU for its excellence, diversity, and commitment to applied education. For more information about Eastern Michigan University, visit the University's website. To stay up to date on University news, activities and announcements, visit EMU Today.