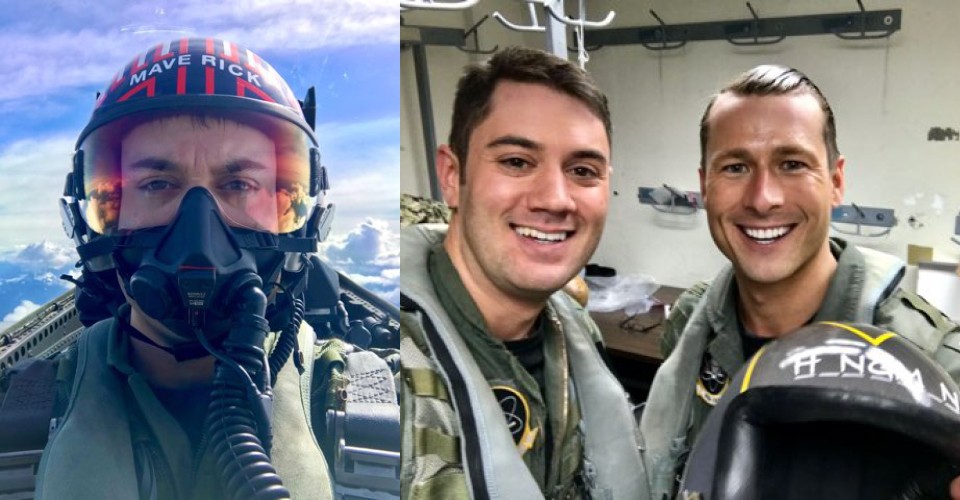 YPSILANTI – Watching action-packed movies like the first “Top Gun” and jaw-dropping aerobatic moves performed by the U.S. Navy Blue Angels inspired Eastern Michigan University alumnus Christian “Griff” Frasher to pursue a career in aviation. After graduating from EMU’s aviation program and commissioning as a naval officer from the University of Michigan’s Naval Reserve Officer Training Corps (ROTC), he landed a dream job as a naval aviator fighter pilot climbing the ranks to Lieutenant Commander. Recently, the Navy pilot added another title to his resume as Tom Cruise’s body double in the hit film “Top Gun: Maverick.”

Frasher said his college journey had a significant impact on his career. “Eastern Michigan’s aviation program was set up to prepare students to go into the airline industry,” said Frasher.  Despite this, the syllabus was modified for ROTC students to still receive foundational flying knowledge and experience and it gave him an advantage once in the Navy’s flight program. “I learned everything from how the airspace structure is developed to talking on the radio or navigating on charts,” he added.

In “Top Gun: Maverick”, Frasher is one of several pilots conducting many of the eye-catching maneuvers actor Tom Cruise is seen performing in the movie. He would fly both with and without actors in an F-18 Super Hornet near locations featured in the movie, like the Naval Air Station Whidbey Island in Washington. He said nearly all of the maneuvers were performed by pilots rather than computer-generated animations, which is a treat for movie-goers.  Frasher credits being at the right place at the right time for achieving this role after returning to Strike Fighter Squadron 122 (VFA-122) as an F-18 flight instructor after being forward deployed with VFA-195 in Japan for three years.

According to Frasher, VFA-122 was an excellent resource for the studio when they needed pilots and jets. When the real “Top Gun” school, based in Fallon, Nevada, couldn't fulfill all of the flight obligations for the film, Paramount sent a request for pilots, and the instructors of 122 responded.

Frasher said that after getting his foot in the door and building trust with the movie’s aerial coordination crew and navy leadership, he was able to apply his skills as a low-altitude tactical training instructor. “The final portion of the movie is all low-level flying, which means the jets are very low to the ground, going very fast,” said Frasher. “It takes a little bit of extra training to feel proficient doing that, and I had the qualification and the enthusiasm to make it safe and look good.”

“For students wishing to enter the aviation field, you need motivation,” said Frasher. “I see many people disqualify themselves from going down this path before ever being told ‘no’ by the Navy or Air Force. Many people are like, I'm too tall or too heavy, or my eyes aren't quite right. Don't disqualify yourself before someone else higher up tells you ‘no’ medically.”

For Frasher, much has changed since the film. He deployed on the USS Nimitz during the pandemic, while fulfilling his 10-year commitment to the Navy in VFA-94. After having a baby with his wife, Megan, EMU alumna, he has transitioned to a full-time support role in the Naval Reserves flying F-5 Tigers, the aircraft that portrayed the fictitious MiG-28 from the first “Top Gun” movie that started it all.

Founded in 1849, Eastern is the second oldest public university in Michigan. It currently serves more than 15,000 students pursuing undergraduate, graduate, specialist, doctoral and certificate degrees in the arts, sciences and professions. In all, more than 300 majors, minors and concentrations are delivered through the University's Colleges of Arts and Sciences; Business; Education; Engineering and Technology; Health and Human Services; and its graduate school. National publications regularly recognize EMU for its excellence, diversity, and commitment to applied education. For more information about Eastern Michigan University, visit the University's website. To stay up-to-date on University news, activities and announcements, visit EMU Today.