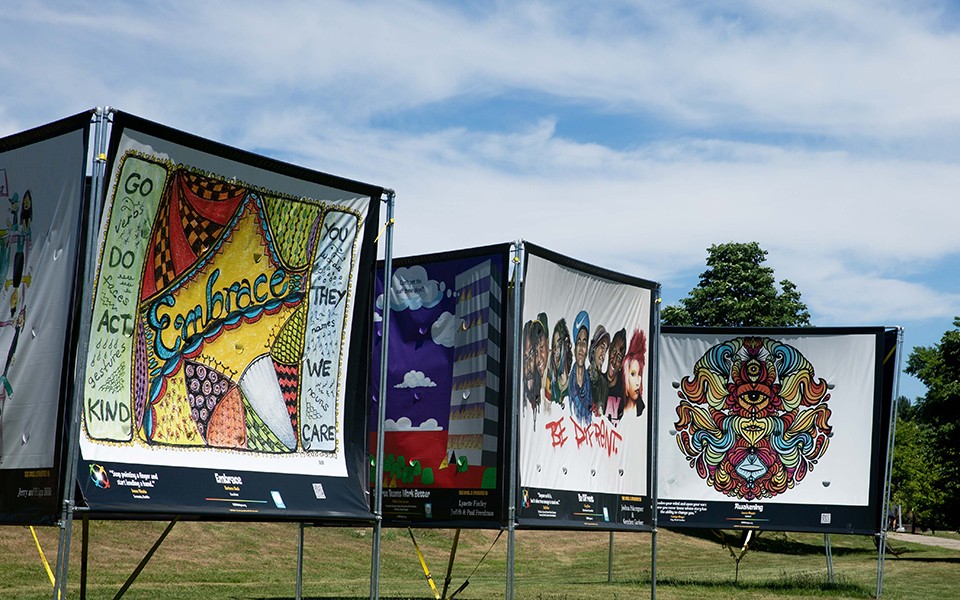 YPSILANTI – Eastern Michigan University’s Engage@EMU announced a new partnership in February 2022 with Embracing our Differences Southeast Michigan, a nonprofit organization that aspires to promote social change with the use of artistic projects. Considering EMU’s mission to enrich lives in a supportive, intellectually dynamic and diverse community, this partnership showcases large-scale public art pieces crafted by local artists and artists from around the world. The banners can be admired at Gallup and Leslie Science Center parks in Ann Arbor as well as Riverside and Parkridge Community Center parks in Ypsilanti now through September.

“The mission of Embracing Our Differences Southeast Michigan is to use art to jumpstart conversations about differences and help foster respect, understanding, and appreciation for those differences that make people who they are,” said Tyler Calhoun, operations and communications coordinator of Engage@EMU. “Art has a vital role in promoting social change. Art gets people thinking, and it also helps to unite people.”

Enage@EMU has gathered nine student docents from different areas of campus to help bring this project to life. They include a leadership team made up of two graduate students, one studying speech-language pathology, the other studying applied drama and theater for the young as well as two staff members, Tyler Calhoun and Decky Alexander. The docents are trained to discuss the posters with visitors and illuminate the messages behind each art piece.

“We would like to encourage all groups and organizations to visit the four sites, and specifically the large exhibits at Riverside and Gallup Parks,” said Nancy Margolis, the executive director of Embracing our Differences Southeast Michigan.

Tours, provided by EMU docents, will be available at Riverside and Gallup Parks for schools, camps, church groups, daycare centers, and others who are interested. Transportation to and from the parks is available for free. For more information about tours email nnmargolis@aol.com or call 734-355-0577.

About Eastern Michigan University
Founded in 1849, Eastern is the second oldest public university in Michigan. It serves more than 15,000 students pursuing undergraduate, graduate, specialist, doctoral, and certificate degrees in the arts, sciences, and professions. In all, more than 300 majors, minors, and concentrations are delivered through the University's Colleges of Arts and Sciences; Business; Education; Engineering and Technology; Health and Human Services; and its graduate school. National publications regularly recognize EMU for its excellence, diversity, and commitment to applied education. For more information about Eastern Michigan University, visit the University's website. To stay up-to-date on University news, activities, and announcements, visit EMU Today.